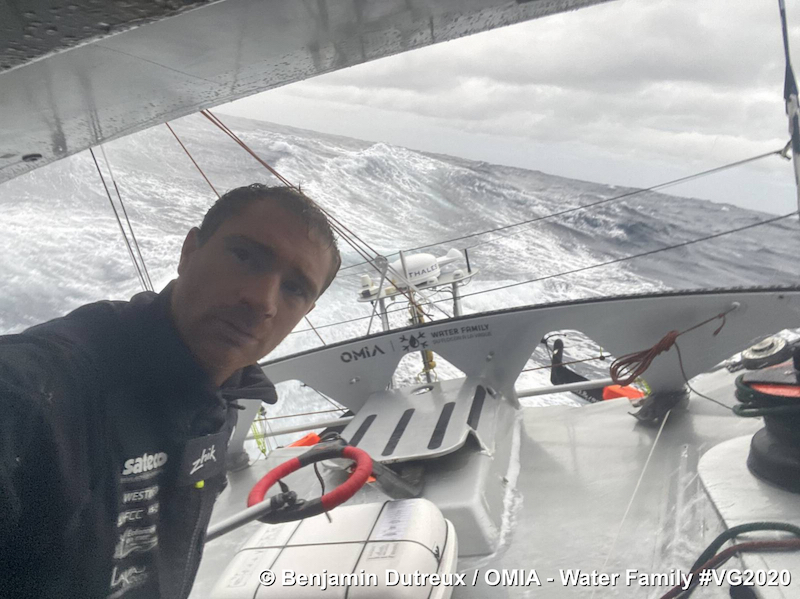 On the fourth morning at sea on the 2020-21 Vendee Globe solo around-the-world race the daggerboard boats have regained the nominal leadership today, with the wily Jean Le Cam in first, chased by Les Sables d’Olonne’s Benjamin Dutreux in second.

Having taken a middling route over the last 48 hours, Nico Troussel on the Juan K foiler Corum L’Épargne sits in third.

But 90 miles to their west the other fast foilers are back in better breeze after a relatively slow night.

Two hundred and fifty miles east of the Azores the fleet has been negotiating a high pressure ridge about 120 miles wide which meant a night of relatively light downwind conditions before they pass to the west of a small low pressure system which will present some faster, full on sailing today.

In sixth Thomas Ruyant (LinkedOut) profited from his more westerly option before gybing inside last night’s leader Charlie Dalin (Apivia) to lead this group by three or four miles this morning in what is an exacting tactical battle akin to the Figaro fleet.

In among the Figaro aces, Dalin, Seb Simon, Troussel, in eighth, Alex Thomson (Hugo Boss) is enjoying the intensity of the boat on boat racing, finally up against the best of the French fleet over a sustained period for the first time and the British skipper is about a mile up on Dalin this morning.

“There are four of us in the same place with a little more wind than expected and things are moving faster,” Charlie Dalin said when joined on this morning’s early radio call. The Apivia skipper explained the day’s program:

“Here we are going to get around a small depression that has formed. We will go around it from the north as we approach the Azores. It’s going to be full on at 25 knots of wind.”

Behind, the rest of the fleet – including Samantha Davies, Sébastien Simon, Damien Seguin – about 30 miles back, will pass this small depression in the afternoon before continuing south with a northerly wind of 15 to 20 knots.

Meantime Jérémie Beyou is heading for Les Sables-d’Olonne. As he nears Cape Finisterre, the skipper of Charal is making 10 to 15 knots. His arrival back in Les Sables d’Olonne is still estimated for Friday evening.

“It hit me in the stomach,” Dalin said this morning. “I am in a good position to know the commitment that these projects require from the skipper, from a team, from the sponsors – these are years of work, of reflection. What happens to him we would never wish on anyone. ”

Burton In and Out The Sin Bin
Last night Louis Burton (Bureau Vallée 2) fulfilled his penalty for jumping Sunday’s start gun. The skipper from Saint Malo was required to stop racing for five hours at a point agreed with Race Management before the latitude of Lisbon 38 deg N. Burton stopped at 2125hrs TU last night and resumed racing at 0245hrs.

Fabrice Amedeo – a slow return to business
The skipper of Newrest – Art & Fenêtres, who left the port of Port-Olona on Wednesday evening, continues his slow recovery. Amedeo was approaching the northern Spanish coast, was sailing at four to eight knots last night in readiness of being able to tack to the west.