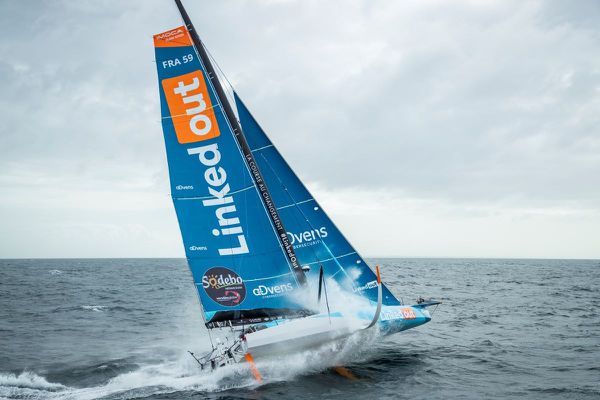 Thomas Ruyant is back on course and up to race speed again today after a scary moment overnight when a supposedly watertight bow section of his LinkedOut IMOCA 60 filled with water.

Fearing structural damage that could have forced him out of the race or worse threatened to him with sinking, Ruyant slowed his boat to a virtual dead stop before deploying pumps to bail the compartment out. When that was done, to his relief, he found the water ingress was because two hatches had been forced open by water pressure.

“The two front hatch latches opened because of the waves,” he said. “At the time I was sailing at over 25 knots. The boat filled up in 30 minutes while I was asleep.”

On December 18, 2016 at almost the same point in the race during the last edition Ruyant’s ‘Le Souffle du Nord Pour le Projet Imagine’ IMOCA 60 nearly broke in half between Tasmania and New Zealand forcing Ruyant to withdraw from the race and nurse his broken boat to New Zealand.

“I thought history was repeating itself,” he said ruefully today.

Back in the race again today and still in second place, Ruyant has his work cut out for him to try to catch race leader Yannick Bestaven on Matre Coq IV – who is 93 nautical miles ahead – while also fending off an attack from the hard charging Charlie Dalin in third, just 16 nm behind.