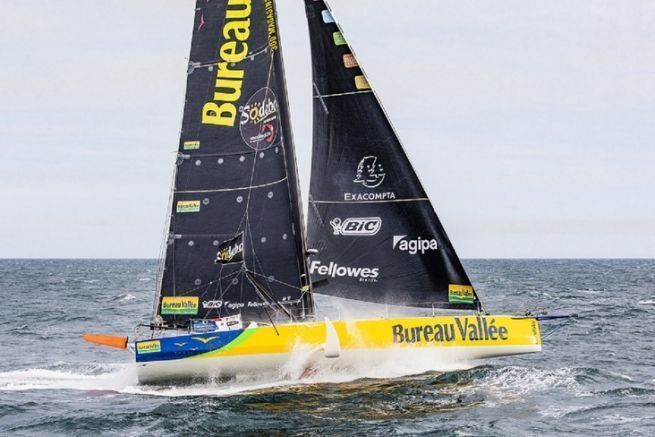 Writing exclusively for Yacht Racing Life from his home in Lorient, France 2016-17 Vendee Globe skipper Conrad Colman brings us his view on the sixth week of racing in the 2020-21 Vendee Globe race.

The Vendée Globe is defined by the fact that it is a solo adventure, a voyage into oneself as much as a voyage around the world. This is both exhilarating and exhausting and leaves you both full and completely drained in the same moment.

Given this, and the year of forced isolation that everyone has experienced, I took great joy at watching Louis Burton, Damien Seguin, Boris Herrmann, Jean Le Cam and Benjamin Dutreux come together for a friendly chat in the windless south this week. 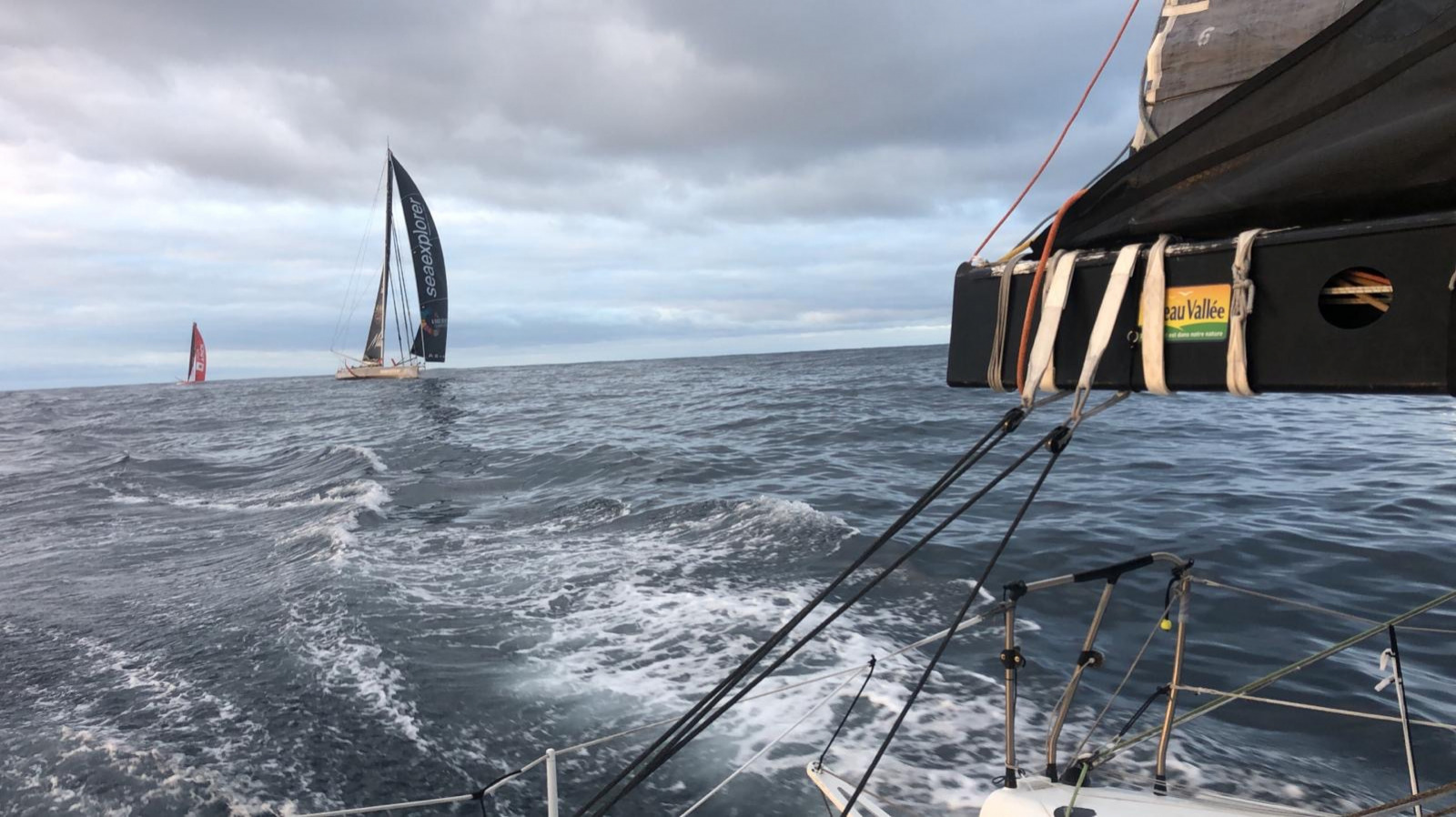 It is unprecedented to find so many boats so close together and in conditions that allowed them to drop by for a social call. Boris and Damien got close enough to be able to simply talk with each other. In the last edition, I passed Kojiro in the South Atlantic close enough to wave but given the language barrier we had little to say to each other beyond Konichiwa and good luck!

The light conditions that permitted such socialising are not reserved for R&R however as all the sailors promptly picked up their tool kits and set to repairing sails, hydro-generators and electrical systems while their boats were more or less stable.

In the group photos we saw that Louis Burton was sailing in the calms with one reef in his mainsail, clear evidence that his mast track problems have stopped him exploiting the true potential of his boat. His solution for this is quite remarkable. 400 miles ahead is the deserted island of Macquarie and he will seek shelter behind its 300 metre high hills in order to climb the mast, replace a section of track and set up a new halyard system to replace his broken lock system.

In 2015 when I was racing the Barcelona World Race with Nandor Fa we had a similar problem in the same place on the racecourse. Our main was jammed on the track and we were unable to hoist or drop it. Squalls were on the horizon.

During a series of brutal mast climbs with the boat charging on the waves and the wind blowing more than 30 knots, Nandor lost his grip on the rigging and slammed his head against the mast. I was showered with blood while standing on the deck and later had to stitch his forehead up, without anaesthetic! All of which to say, I applaud Louis’ plan to seek shelter before attempting repairs up the mast.

Charlie Dalin saved his race, and his position in the leading trio, thanks to a quick response when his daily boat check revealed that his foil was flopping around inside its case.

The foils are held in place at two points, one about 60cm inside the boat and the outer bearing that is flush with the outside of the hull. These bearings are made of a slippery teflon plastic that allows the foils to be trimmed under load.

Because of the complex shapes required it is hard to machine these plastic blocks in one piece, so they are often split longitudinally into and upper and lower section. The upper section is the most important because it is here that the lifting force of the foil is applied to the boat, but the lower one is also crucial to support the foil when the load comes off. This is the piece that had apparently fallen off Charlie’s boat.

As we have seen so many times on other boats, he got cutting tools out and cut the required shape into spare thick carbon plate and laminated together a new bearing surface. If you remember how difficult this job was for Alex in the calms of the South Atlantic, imagine trying to make a precision fit with highly loaded parts while hanging off the side of his heeled yacht!

Check out the photo below to better understand his worksite. 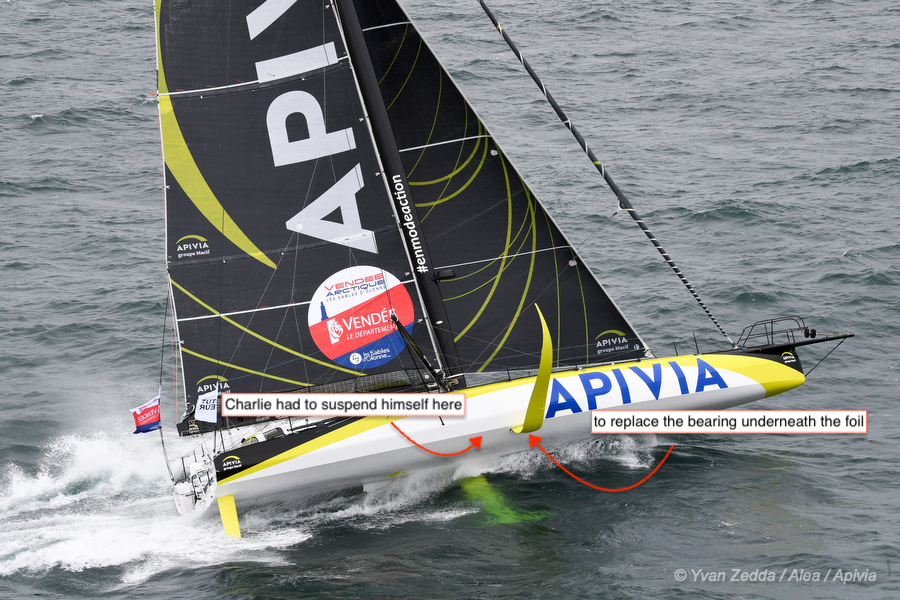 Thomas Ruyant on LinkedOut also narrowly escaped serious problems, but this time with a dreadful sense of déjà vu. Four years ago, while on a similar part of the course, his boat suffered a massive structural failure forward of the mast and almost folded up like PRB. Given this, Thomas could be forgiven for losing his mind when he found the entire front of his boat full of water.

Vendée skippers do a daily check through the whole boat but otherwise live in the relatively tiny navigation area with the doors closed to preserve he heat from the engine and to maintain watertightness in case of a problem. Thomas was alerted to his boat taking on water by a change in its behaviour as it passed through the waves and discovered that the front of his boat was flooded with several tonnes of the southern ocean’s finest. All this from a small gap in his foredeck hatch that opened up when the waves pushed on the latches.

IMOCA class rules, section C.3.2 (a-d) require each boat to be equipped with “two robust buckets” and two pumps with a combined output of 12,000 litres per hour. Given this, you would think that he could empty his boat quickly but he said that it took him nearly seven hours to drain an estimated 15,000 litres out. Why did it take so long to empty the boat with such powerful pumps onboard? Sadly they never work as they should and their efficiency is reduced by the splashing water and the need to chase the waves around inside the boat with the mobile pumps.

I had a similar case in the last race when a cockpit drainage hose started dumping water into the boat instead of over the side. When I discovered the problem I had several tonnes of water inside the aft compartment and the pumps were not sufficient to drain such a volume in a reasonable time. I ended up opening the escape hatch on the transom and steering S-turns in order to shake the water out through the open door!

Finally, as an escape from all the drama at the front of the fleet, let me direct you to Ari Huusela who appears to be having the time of his life. In second-to-last place, this cool Finn regularly sends back smiling photos of himself topless and watching sunsets, in stark contrast to the layers of clothing and deep-set stress we see elsewhere in the fleet.

Oh, that we could all be so satisfied in this challenging year!

Now, some responses to a couple of your questions. Please keep sending them in!

Bill Clark s/v Sea Scape Bristol 35.5
Hello Conrad, I am curious what happened to your boat, the Natural Energy, after 2016 vendee globe. Do you still have her? She refitted and sailing now? I if I remember correctly, you had solar panels incorporated in the mainsail. I am curious to know how that worked for you.

Hi Bill,  My boat from 2016 is….. Sebastian Destremau’s MERCI. I sold the boat to another sailor upon my return from the last race who ended up getting it seized as part of bankruptcy proceedings, allowing Seb to pick it up for pennies on the dollar.

I did have experimental flexible solar panels on my mainsail as part of my push to sail around the world without using any fossil fuels. They didn’t last for long as they were not sufficiently waterproof and I’m not sold on the idea of sail based solar panels as I would prefer to keep electrical connections down on the deck where I can service them!

Jeremy Jenkins
Hey, Conrad great to hear from you! Just wondering how many weather models the sailors have access to and do they have any software on-board to suggest routing options or is it all just up to their own interpretation and intuition?

Hi Jeremy,
Interpretation remains an important skill as weather models are theoretical but you sail in the real wind over your head! The gap between the models and reality has been steadily reducing as sensors on land and sea have proliferated and satellites are able to scan the wind speed and direction from hundreds of kilometres up.

There are two main families of weather models, the American one from NOAA that is called the Global Forecast System (GFS) and the European model from the European Centre for Medium-Range Weather Forecasts (ECWMF). Various national weather services or commercial forecasters like Predict Wind buy the raw data outputted from these models and can often re-analyse it with their own algorithms but these are less used by Vendée sailors. We typically download both the GFS and ECWMF twice a day through a software program called Squid and then compare the forecasts and plan the route in the Adrena routing software.

Vendée skippers use data and software that cost thousands of euros in order to have the most accurate and safest route on the racecourse but there’s no need to spend so much money if you’re a sailor or enthusiast. There are a bunch of really powerful apps or web services to get high-quality weather now, indeed my favourite site on the whole internet is windy.com which gives free access in a really beautiful dynamic interface.