It has been a downright adrenaline pumping drama filled fourth week for the solo skippers competing in the Vendee Globe solo around-the-world yacht race. A good time then for past-Vendee Globe skipper Conrad Colman to take stock of exactly what’s been going on.

The insanity of this week in the Vendée Globe can be told through two significant events, the retirement of Alex Thomson and the shocking sinking of PRB and the dramatic night-time recovery Kevin Escoffier.

For Alex on Hugo Boss, you need only to watch his recent heart-rending video (below) to see the emotional toll that abandoning the race has had. Having given so much of his life to the sport and created such great momentum after two podium finishes, it’s brutal to see the dream come to an end.

When Alex was working tirelessly for days in the bow of his boat to rebuild the longitudinal member that had cracked, I mentioned in a previous article that, due to limited supplies on board, he would have one shot at the repair and then hope that lady luck let him pass through the oceans without needing any other significant repairs as his cupboards would likely be bare.

As Alex hasn’t released photos of the broken rudder that forced his abandon we don’t know whether a lack of supplies contributed to his decision, or whether there was simply nothing left to repair as was the case for Morgan Lagravière on Safran in 2016. Regardless, I want to address a couple of points I have seen in the comments online. 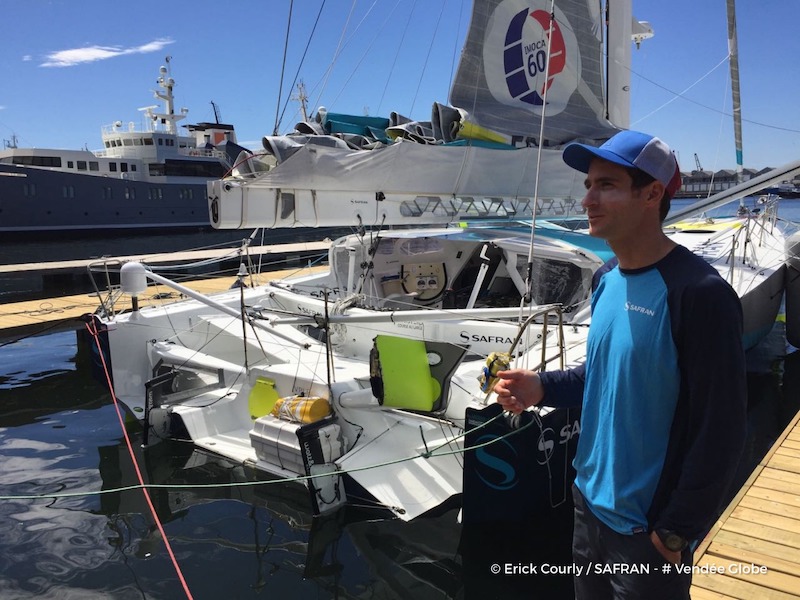 In the Vendée Globe, the ultimate truism is: “In order to finish first, first you have to finish.” This simply presupposes that if you stay in the race long enough, you might get to the finish before anyone else. But, in endurance sports, there is often an inherent tension between finishing and winning because weighing yourself down by carrying everything needed to fix any possible problem will certainly prohibit you from winning.

This sets up a binary situation where you either go for the win, or you set out just to finish. The French call this “ça passe ou ça casse” (break it or make it) and it manifests itself in a thousand little ways in the years building up to the race.

Note that I am not at all criticising Alex or his team here, indeed they sought out the best practices in Formula 1 after his DNFs in 2004 and 2008.

The team created a testing program that established the working life of each of the thousands of parts on the boat, weighing that against its probability of failing during the Vendée Globe in order to increase their chances of making it to the finish. They were rewarded by two back to back podium finishes but this time the failures he experienced didn’t match up with their prerace analysis.

He could have carried a spare rudder, as some other sailors do, but his boat is equipped with kick-up rudders that are meant to protect themselves and the team certainly asked themselves how many B plans were reasonable in their pursuit of the fastest, and lightest boat possible.

Speaking of odds, Kevin Escoffier must be counting his lucky stars at the moment. If you’re reading this website I am sure that you are familiar with his story by now. If not the TL;DR version is, his boat snapped in half, he abandoned ship into his life raft where he was later rescued that night by Jean Le Cam.

His rescue by Jean Le Cam makes a beautiful karmic story because it was a PRB boat, then skippered by Vincent Riou, that picked up Jean just south of Cape Horn in the 2008/09 edition of the race. Jean’s keel bulb failed and his boat capsized, leaving Jean stuck inside and awaiting rescue. Vincent Riou plucked Jean from his boat but in the process damaged his, leading to a dismasting and the end of his own race. This time Jean has more than paid his debt!

Dramatic stories aside, IMOCA’s are not meant to sink. Like the Titanic (I feel like that’s perhaps a bad reference) the rules require five watertight bulkheads, equipped with watertight doors and the boats are fitted with two high-speed pumps. With the boat breaking in half, clearly, pumps are not going to help but the safety feature of last resort is the inherent flotation built into the hulls.

Racing yachts are typically made of a sandwich of either foam and/ or kevlar honeycomb that is sealed by an inner and outer layer of carbon that makes a watertight, inherently buoyant structure. When the boat is built, the naval architect needs to submit calculations that show if the boat weighs 7.5 tonnes, its structure contains at least 7.5 cubic meters of encapsulated buoyancy. This means that even if it is completely flooded, the hull shouldn’t sink.

However, the only other time the front fell off an IMOCA 60, skipper Bernard Stamm discovered that even though his boat wasn’t actively sinking, it was quickly rendered uninhabitable (see below). 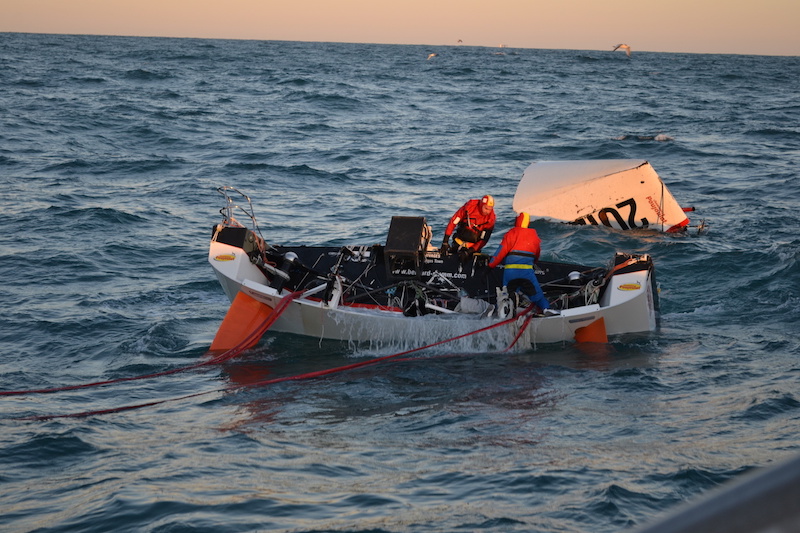 In the case of PRB, he explained that he only had time to send a quick message to his team before the electronics were swamped and caught fire, making the life raft his final retreat.

Now that Jean and Kevin are blazing through the Indian Ocean in seventh place, how much longer will they be enjoying each other’s company? Remember that the Vendée Globe is a solo adventure so Jean will still be doing all the sailing but he can’t keep his passenger for too long as he doesn’t have food for two! Back in 1996 when Pete Goss picked up Raphael Dinelli from his upturned yacht in the middle of the Indian Ocean he diverted to Tasmania to drop him off.

This time, Jean will probably drop Kevin onto a French Navy frigate that is currently patrolling the fishing grounds around the Kerguelen archipelago. The latest routing has them going close past the islands so it shouldn’t be a bother to set up a mid-ocean rendezvous. I hope they pass Jean some good red wine in return, as I know he’s a fan of the good stuff when he’s at sea.

For the sailors reading this, here are some takeaways from Kevin’s experience:

Finally, while this week has been dominated by dramatic stories of breakages and rescues, the race continues, and even experienced sailors like Boris Herrmann on Seaexplorer – Yacht Club de Monaco are having to get to grips with the challenges of solo sailing.

Even an accomplished solo sailor like Boris, who has several (crewed) laps of the planet under his belt, is finding these powerful and – when things go wrong – unwieldy boats a challenge to manage all by himself. I highly recommend watching his video below, his calm demeanour belies the challenges he’s dealing with.

Meanwhile, the drama and damage toll continues as I am writing this article with the news that both Sebastien Simon on Arkea Paprek and Sam Davies on Initiatives Coeur are both heading north in search of calmer conditions in order to assess damage to their respective boat’s foil (Seb) and keel (Sam) after underwater collisions.

Although I have not had room to cover these incidents here Justin Chosholm and I will no doubt be discussing them on tomorrow’s episode of The Yacht Racing Podcast.