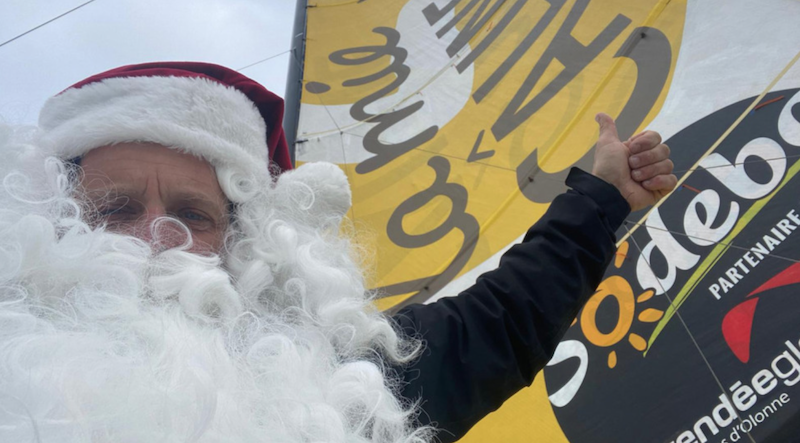 Conrad Colman casts an expert eye over the Vendee Globe fleet during the Christmas period and weighs up what sort of presents the complicated weather scenario might deliver for the assortment of solo around-the-world skippers.

I’m writing this article with the memory of my young nephews’ happy cries still echoing in my ears. In this year of so many troubles and upsets, it is crucial to be able to take comfort in each other’s presence. I wish you a very happy holiday period, in so far as the current circumstances allow.

Thankfully, not all of those that signed up to be alone at Christmas are indeed completely alone.

This unprecedented edition of the Vendée Globe is so compact that not only do the 10 ten boats fit in less space than separated the two leading boats last time around, but three skippers (Boris Herrmann, Jean Le Cam and Benjamin Dutreux) are sailing in sight of each other and swapping stories on the VHF.

I have now seen countless articles talking about how compact the fleet is but I felt it needed a visual representation. Like past years, the fleet is still dotted along the bottom of the world like a line of Christmas lights stretching from the middle of the Pacific to the middle of the Indian Ocean. However, the pointy end of the fleet is remarkably compact, as you can see in my homemade graphic below. In 2016, we had almost more than 10 times as many miles separating Armel Le Cleach in first to me in tenth after 46 days of racing than the 447 miles currently separating Yannick Bestaven to Maxime Sorel!

With the boats so close, it might be tempting to get together for sing songs like Eric Bellion and Alan Roura did in 2016.

Given that sailing two IMOCA’s close enough to sing to each other doesn’t look like the best idea (you should really really watch that video). Maybe they could swap recipes on the VHF. Jean gave us a preview of his Christmas Eve feast and it included crab meat with mayonnaise, roasted chestnuts, foie gras on crisp rolls followed by the main meal of veal with mushrooms. All washed down by a bottle of red wine, of course.

With a meal like that you might be forgiven for forgetting that there is a race on. On the weather side, the front of the race dominated by the anticyclone that has slowed the leading trio and trapped the chasers. Boris Herrmann said last night that his boat speed dropped so low that his autopilot was unable to steer the boat, leading to a long, cold and frustrating night of trying to at least drift in the right direction.

The situation for the next couple of days is that the high-pressure zone that has blocked the route will continue southwards and will slip underneath the Antarctic Exclusion Zone (AEZ), opening the door for the fleet continue eastwards. However, the situation remains complex, as a new low is forming north of their position and presents a really opportunity for Yannick.

Routing shows that he is likely to head towards the north east on starboard tack to get more stable winds from the border of the little depression before tacking over and setting his sights on Cape Horn. The tightly curved isobars, and associated curving winds, present an opportunity for Yannick to pick the wind direction he wants by choosing where he tacks..

In contrast, Charlie Dalin and Thomas Ruyant have less agency as they are closer to the centre of the high and must instead just wait for the new wind to come to them. Charlie’s position next to the AEZ, coupled with the straighter isobars and more stable wind field means that when he is confronted by the inevitable headwinds he will have to sail further off course on a header in order to get the same wind shift that Yannick will benefit from earlier.

All of which to say, Yannick is in a powerful position and could further buffer his lead.

Or, none of what I have written above will have any bearing in reality because of…. 2020!

Keep watching to find out.