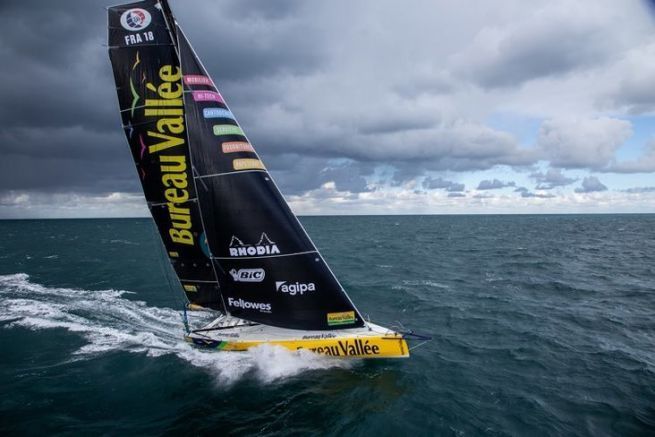 After the sailing world was distracted by the America’s Cup drama taking place in down in New Zealand over the last few days it’s now time to refocus on the fascinating battle being fought out in the Atlantic Ocean for the lead in the Vendee Globe solo around-the-world race.

Two skippers are making all the headlines after they led the fleet back into the northern hemisphere over the weekend, namely Louis Burton (aka The Comeback Kid) on Bureau Vallée and Charlie (Rookie no More) Dalin on Apivia.

This pair managed to wriggle their way through the Doldrums better than the rest of the now chasing pack which includes Thomas Ruyant on LinkedOut, Damien Seguin on Apicil, Yannick Bestaven on Maire Coq IV, and Boris Herrmann on Seaexplorer Yacht Club de Monaco.

Burton was out first and has been making fast progress (around 17 knots today) in seemingly well-established 18 knot north-easterly trade winds. Dalin meanwhile was 115 nautical miles (nm) to Burton’s south east and that positioning puts him nominally at least at the top of the leader board.

Both skippers know that whoever gets themselves fully on to the trade wind conveyer belt could make a big jump on the fleet. With under 3,000 nm left to race any major jump at this stage could end up being decisive.

“Once the leaders have wriggled clear of the doldrums they have 4-5 days of reaching through the North Atlantic trade winds. Conditions look like they will have 15-18 knots of wind from just forward of the beam.

“It will be good for the boats with working foils still – and interesting to see how the ones without hang in there. The jet stream looks pressed well south at the moment which means the fleet will reach the north Atlantic procession of highs and lows around the latitude of the Canary Islands.

“The Azores high looks like it will be squashed and elongated east – west meaning that it will allow a reasonably direct route with what amounts to a ridge crossing before getting into the more solid frontal conditions to the north.

“However it looks like the weather that is pressing the Azores high to the south and making it less of a feature will also mean the fleet will have to negotiate some strong conditions in the form of a big winter low in the north Atlantic.