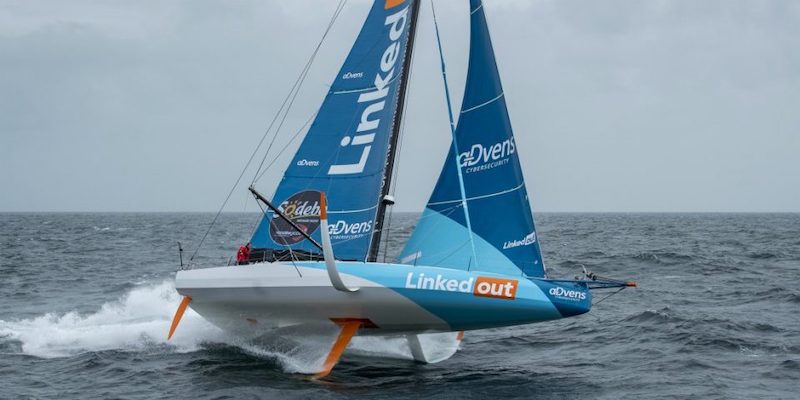 French skipper Thomas Ruyant has sustained damage to the port foil of his IMOCA LinkedOut while lying in second place in the South Atlantic around 72 nautical miles behind leader Charlie Dalin on Apivia.

The French skipper had to stop for a short period to assess the damage and now says he will now be unable to use the foil on the port side of his boat for the remainder of the race.

Ruyant told his team that it was around 0200 UTC this morning while he was resting inside his boat LinkedOut, that he was woken by a loud noise outside the boat. He did not, however, feel any shock to the boat. But on inspecting the boat with his headtorch he immediately noticed major cracks in the shaft of his port foil.

[The foil is made up of two parts, a ‘shaft’ and a ‘tip’. It is the tip that allows the sailboat to come out of the water thanks to the lift force it exerts. The shaft is the part the foil which connects the tip to the hull.]

Ruyant immediately stopped the boat and sailed downwind to further inspect the damage.

“I was about 120 degrees to the wind, I was sailing at about at 20 knots when I heard this loud noise” reported Ruyant this morning. “I don’t really have an explanation. I have brought the foil in all the way so that it doesn’t drag in the water. In daylight I was able to inspect the foil and its OK at the top and speaking with my team and the architects it seems safe.

There is no water coming in and the foil well itself is undamaged. But the foil itself is cracked in a number of places. The structure of the foil is compromised. I am waiting for the designers analysis to see if I should cut it.”

Ruyant is understandably massively disappointed, having been close to the leader Dalin and having a great race so far. Despite the shock news the LinkedOut skipper remains positive.

“I am second in the Vendée Globe,” he said. “Since Sunday small problems have built up which I managed to deal with these really are topped by this damage. I carry on racing nonetheless even if I am a bit handicapped with only one foil.

“But I am comforting myself in the knowledge I still have my starboard foil, which is statistically the most important for a round-the-world race. The course is still very long. I continue, I’ll hang on in there!”