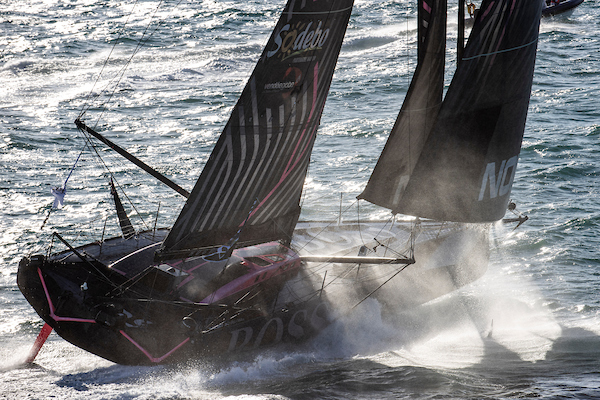 It has been a profitable night south of the Azores for Alex Thomson in the Vendee Globe as the British skipper opened miles on the pack which are chasing him as the fleet heads south to deal with tropical storm Theta which lies directly in its path.

At the northerly edge of storm Theta this morning, Charlie Dalin (Apivia) gybed west at around 0300hrs this morning, electing to take what would be considered a safer route. His course had him more than 90 miles west of Thomson and Le Cam who are both on their fifth Vendée Globe races.

The leading boats were accelerating into more wind, “At the moment I have good conditions, 20-2 5knots and am under one reef and code zero.” confided Nicolas Troussel when contacted this morning on the phone. I will not delay in reducing sail ”

Reducing sail area, going on to a smaller headsail, taking a second reef – is on the agenda for the next few hour as the winds will increase significantly as they head closer to the centre of the storm, but some will probably gybe too, avoiding too strong conditions, while at the same time going early enough to make a safe gybe.

Both Troussel and sixth placed Benjamin Dutreux (OMIA-Water Family both confirmed their plans to gybe. Meanwhile it will be interesting to see the routes of Thomson and Le Cam, the 61 year old French skipper is racing the 2007 boat he sailed to sixth in the last edition.

The gaps will widen
While the leaders get ready to put on heavy gear, the mood is different in the middle and at the back of the pack. In the northeast and as far as the Azores, part of the fleet crosses an area of ​​lighter wind. The gaps are therefore likely to widen between them and the leaders over the course of this fifth day at sea.

Fabrice Amédéo, who left Les Sables d’Olonne on the evening of on November 10 after his technical stoppage, is tacking near the cliffs of northern Spain.

Finally, on the edge of the Bay of Biscay Jérémie Beyou continues his journey towards the French coasts at moderate speed. He is just under 300 miles from the Vendée.