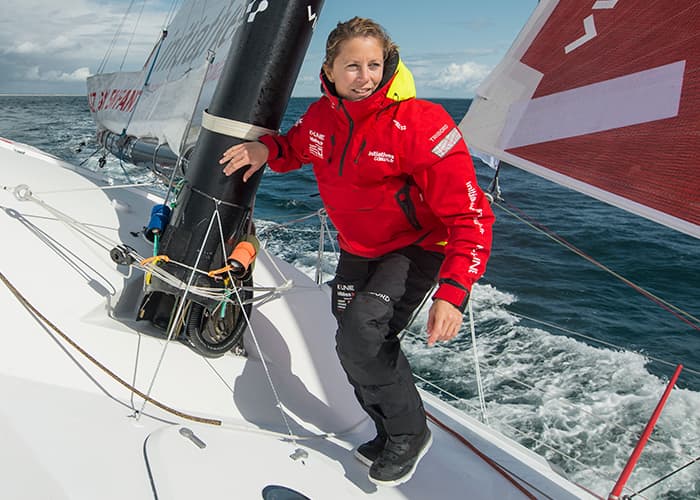 British ocean racer Sam Davies today restarted her solo circumnavigation after crashing out of the Vendee Globe last week when structural damage to IMOCA 60 Initiatives Coeur meant continuing in the race would be impossible.

Twelve days after an underwater collision brought her boat to a sudden stop – “as if I had hit a rock” as she said at the time – causing major damage to its keel housing structure and other parts of the boat, Davies left Cape Town, South Africa this afternoon with the aim of completing her lap of the planet – albeit outside of the race.

Uppermost in Davies’ reasons for putting back to sea was to maximise the funds raised for her sponsor’s remarkable initiative to help save lives of impoverished children around the world who are suffering from heart problems.

For each new fan or share on the Initiatives-Cœur Facebook and Instagram accounts, the boat’s sponsoring partners Initiatives, K-Line and VINCI Énergies will donate a Euro to the Mécénat Chirurgie Cardiaque association, which brings children from disadvantaged countries with heart defects to France for life saving operations.

A typical operation costs around 12 thousand Euro and since the start of the Vendee Globe, 37 children have had their treatments funded. The overall goal is to raise funds for at least 60 children to be treated.

After several days and nights of hard work by Davies’ shore team the Initiatives-Coeur IMOCA 60 was back in full working order enabling Davies set off to round the Cape of Good Hope for the third time in three weeks. From there she will dive deep into the Southern Ocean and pass lie the landmarks of Australia’s Cape Leeuwin and South America’s Cape Horn before turning north up the Atlantic Ocean towards her port of origin – Les Sables D’Olonne in northern France.

If she is successful, Davies will join a list of other 12 skippers who have completed the course outside the race – including Patrice Carpentier in 1990, Isabelle Autissier in 1997 and Bernard Stamm in the 2012-13 edition.

Davies will continue to be monitored by the Vendee Globe race control but will appear on the tracker in ghost mode.