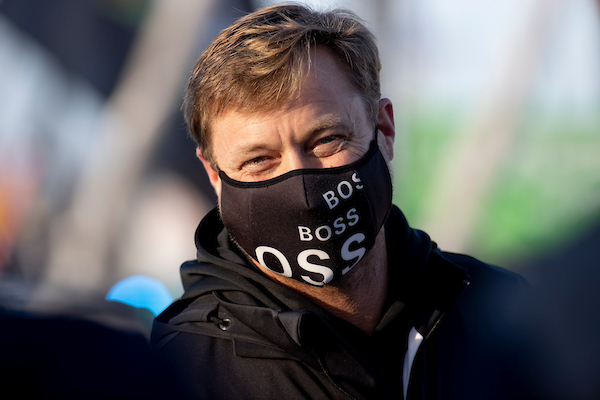 Having finished third and then second on his previous two attempts, British sailor Alex Thomson today set off onboard his HUGO BOSS boat from the seaside town of Les Sables-d’Olonne in France to begin the Vendée Globe – a 24,000-mile, solo, non-stop, unassisted round-the-world yacht race.

A sporting challenge conquered by only 89 sailors in history, the Vendée Globe sees skippers push their minds and bodies to the absolute limits onboard custom-built racing yachts, designed to withstand the world’s toughest oceans and volatile weather systems.

“There is no other sporting challenge like it” said Thomson, as he prepared to leave dry land onboard HUGO BOSS, knowing that he will not see another human being for what could be more than 70 days. “For me, the Vendée Globe is the absolute pinnacle of sporting endeavour. No other sport pushes you so hard, over such a long period, in an environment where you are so out of reach from civilisation with only yourself to rely on”.

This will be Thomson’s fifth attempt at winning the race, which remains the ultimate prize in a sport dominated by the French.

Having finished the last two editions of the race, which takes place just every four years, in third and second place, the 46-year-old, father of two, from Hampshire finds himself as one of the favourites this time around:

“Third, second…there’s only really one place to go, isn’t there? So yes, absolutely we want to win it. It would be the culmination of the past 20 years of my career and certainly a huge moment for our team and for HUGO BOSS, who have showed immense loyalty as our Title Partner for more than 17 years”.

“Of course, a win would be a big moment for British sport too. But this race is a marathon and not a sprint, and we need to do all we can to make sure that we strike the right balance and make the right decisions so that I get to the finish line. And if we can do that, I think we should be in contention for the win”.

Together with 32 other skippers, Thomson began the race ‘behind closed doors’ after France’s national confinement measures prevented the hundreds of thousands of spectators – who normally line the streets surrounding the race village – from experiencing the spectacle.

“It’s a strange feeling to be here without thousands of people waving their banners, cheering and shouting. But this race was designed to be consumed via the internet and from the moment I leave, I’m going to do everything I can to give people something to smile about. I’m going to entertain them from the middle of the ocean. I think, knowing that everyone is watching so closely, that will give me an extra bit of motivation onboard when times get tough”.

Together with their Technology Partner, Nokia Bell Labs, Thomson and his team have installed an array of nine cameras across the HUGO BOSS boat, enabling the skipper to record and stream content for fans from the middle of the ocean. For the very first time, fans will also be able to view health data, including Thomson’s sleep patterns, activity levels, calories burned and heart rate.

“This race is an exercise in self-management. One of the toughest things is making sure that you’re looking after yourself, that you’re sleeping and eating and keeping your energy levels where they need to be. And this time around, everyone will be able to see that for themselves!”

In 2016, Thomson’s hopes of Vendée Globe victory were dashed when, just 11 days into the race, he suffered a breakage to the hydrofoil of his boat. Despite the major setback, the Brit managed to continue in the race, hunting down victory until the final stages and finishing the race less than 24 hours behind the winner, Armel Le Cléac’h. With a British record under his belt – 74 days, 19 hours and 35 minutes around the world – Thomson immediately set his sights on the 2020:

“For us, this Vendée Globe began the day after the last one finished. All the decisions that we’ve made have led us to this point. I’m confident in the performance of HUGO BOSS, and in my own capabilities. I’ve done this before. I understand how hard it’s going to be and how much I’m going to need to fight. And I think that combination of experience and resilience makes us a formidable team this time around”.