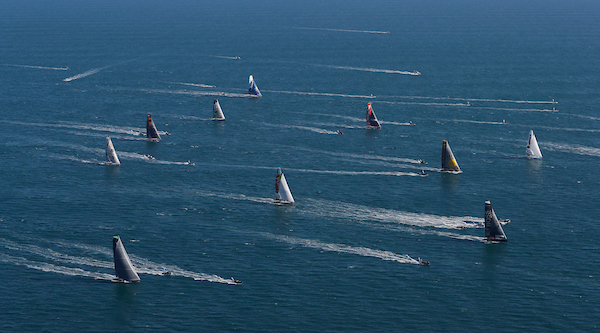 A sea mist shrouding the start zone off Les Sables d’Olonne held up the start of the ninth edition of the Vendée Globe, the solo non-stop round the world race, for nearly one hour and 20 minutes.

But for their patience the record-sized 33 boat fleet was rewarded by late autumn sunshine, a near perfect 10-12 knots south easterly breezes and flat seas when the start gun finally sounded at 1420hrs French time, sending the lone 27 men and 6 women skippers off on their 24,296 nautical miles round the world challenge.

For the nervous first timers the added delay ratcheted up the tension on top of a morning of bubbling emotions. In contrast, the super-experienced solo racers grabbed a welcome quiet cat-nap after enduring what almost all reported to be a sleepless final night on land.

When the gun sounded at 1420hrs (French time) Louis Burton on Bureau Vallée 2 broke the start line first. But the third-time Vendée Globe skipper, racing the boat which won in 2016-17 and holds the race record, was notably seconds ahead of the gun.

He is penalised according to the strict race rules, required to halt his race for five hours – stopping racing and resuming from the same point – before 38°40,000N, so just north of Lisbon.

With two to three months of racing ahead, safe prudent starts were otherwise the order of the day. But as the fleet accelerated away from the line, the fast, foiling IMOCAs started to build speed on the flat seas.

It was the newest, least proven boat of the eight new 2020 generation builds to line up in this race – the Juan Kouyoumdjian designed Corum L’Épargne sailed by first-timer Nico Troussel, who set the early pace, at the vanguard of an armada heading due west into a complex first week at sea. Pre-race favourite Jérémie Beyou lay second and Britain’s Sam Davies was fourth on Initiatives Coeur.

As the afternoon wore on and the pace lifted, on the heels of a strengthening breeze, Beyou’s Charal held the lead making 26kts ahead of Charlie Dalin on Apivia in second with Briton Alex Thomson gradually winding up the potent HUGO BOSS after his promised safe, steady start, to lie third at 1600hrs local time.

Without exception, from rockstar favourites to hard bitten adventurers, the solo racers will be content to be in their preferred element this evening. They are facing a difficult first night at sea with winds over 30 knots after midnight tonight when a first front hits. But they are finally unleashed after a week of Covid confinement, the building breeze now requires full focus race mode, and blows away memories of this morning’s emotional dock out from the famous Les Sables d’Olonne pontoon.

With spectators banned from the famous Channel, the pier heads, the docks and the beaches with a vigilant, active police presence, it was a particular, curiously quiet departure on to the ocean.

From – first down the dock – the zen like Armel Tripon who had missed his usual morning meditation and had the longest walk to his jet black scow bowed L’Occitaine.

His purposeful march was followed by simple direct answers. He chose not to have his close friends and family on the pontoon but was loudly applauded by the appreciative technical teams on each boat as he passed.

“Complex weather, I slept well, but I didn’t have time to do my meditation this morning,” said Tripon, a smile in his eyes that belied his obvious urgency to be at sea.

While shaven-headed Tripon arrived with a chilled pout at his boat alone, surrounded by family, Clement Giraud bolted from his dockside interview overcome by tears. There were long lingering embraces for Damien Seguin and his partner. Switzerland’s Alan Roura and Germany’s Boris Herrmann leave behind tiny babies.

Charal’s Jérémie Beyou commented, “It is my fourth time but I have the same emotions as the first time. It is not easy, not easy. But it is cool to be here with my team I know so well, and with my boat which is well prepared. It is a special thing. I spent a bit of last night looking at the weather and strategy a bit this morning.”

Herrmann said “I am happy to go and ready to go. I am very happy the race is starting at all considering the conditions, it is a good job done by everyone who has organised the race. I’m not too excited, that will come later but I slept very, very well.”

“I am excited, happy to be here with this amazing boat and amazing team. Now hopefully I can go and sail as well as my team has prepared my boat and for the race. I am just really looking forward to it,” said the Initiatives Coeur skipper.

“Why would I be worried, it is too late now,” she said. “I have no indication right now that I am off on a round the world race on my own. I am sure I will be more worried at the start. I hate starts, I am always worried about other boats.

“I am sure the state has a good reason to have locked up the entire population of Les Sables d’Olonne in their houses this morning but to me it seems a little mean spirited when this event comes round once every four years. And I think the organisation has done an amazing job in a very difficult context and I just I think it is a shame that even people who live right on the waterfront are not allowed out of their houses.”

Reunited with her Medallia Pip Hare gushed, “I’m really, really happy even if it does not look like it,” she said, looking all the time to the blue skies and fighting back tears. “I am really nervous. I can’t believe this day has arrived. I can’t believe it is here. It is huge. In a way I can’t imagine what is ahead of me and in another way I can imagine every single minute of it. I just want to go out and find out if this thing that I have thought will be is as amazing. But I think it is going to be better.”

By way of contrast Alex Thomson was brisk and business-like – looking positively skinny as he stepped on board HUGO BOSS.

“It is a lovely morning, the fog has cleared and the sun is out,” Thomson said. “It is going to be an interesting start, great for the TV cameras, the wind should be light to begin with. It is going to build but then a bit of a light patch this evening around 6pm. Then it will build and we get to a front and try and avoid the light air off Finisterre, before the wind comes back in from the south where we will tack again and go west, with potentially difficult and boat breaking conditions, with big waves up to five metres.

“It is going to be a tough five to six days for all the skippers, lots of sail changes and a complicated routing. It will be tricky. And it will sort the men from the boys. For sure, it has been a tough year. It is a shame there is no public.

“I feel happy, privileged I have done four before and so there is not maybe the same emotion of before. I am 2/4 in terms of my starts, I am a 50%-er, I have to make it 3/5. That is the main objective. Every Vendée Globe is the race of your life, I am just looking forward to taking this boat and seeing what we can do together.”

As the fleet streaked away westward after the start,  Yves Auvinet, President of the Vendée Globe, wished the fleet well over the marine radio.

“To all of you fellow sailors I sincerely wish you a nice and enjoyable race around the world, and will look forward to seeing you again. Good luck, fair winds.”