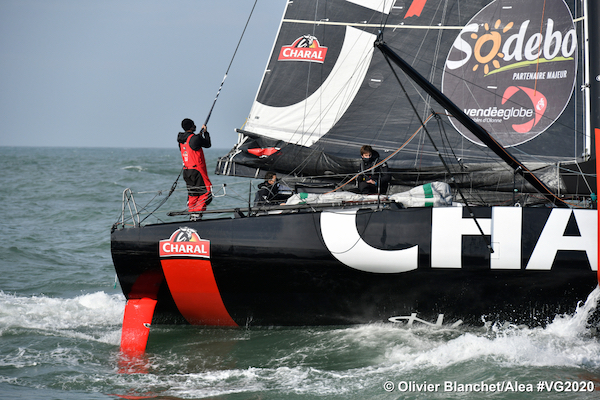 When a disappointed Jérémie Beyou steered his damaged IMOCA 60 Charal up the famous Les Sables d’Olonne channel early this afternoon he received a warm and respectful welcome from throngs of well wishers who had lined the sea walls on both sides.

The face-masked 44 year old French skipper, who had to turn back to Les Sables D’Olonne after sustaining damage on just the third day of the race, seemed especially moved by the messages of support. “Come on Jerem'” was the most common but fans also shouted “Go on, you repair and you leave” and “It’s not over”.

A diver was already in the water as Charal docked and a thorough evaluation of all aspects of the boat will be made. He remained isolated all the time from the media and will return to a health bubble.

“If the boat can be repaired I want to go back.” Beyou emphasised.

Past Vendee Globe competitor Yann Eliès, a guest on the Vendée Live show. had this to say about Beyou’s state of mind.

“I think maybe for two days after it happened Jérémie would have been digesting, wrestling with the disappointment, but then would be looking forwards. For four years, he has been in a particular time and space focused just on the preparation for the Vendée Globe.

“Then it all fell apart. He must find a goal to stay in his competitive sailor’s bubble and leave”.

If indeed Beyou does opt to return to the race he has until 1400 on Wednesday to effect repairs and restart before the 10 day deadline after last Sunday’s start expires.