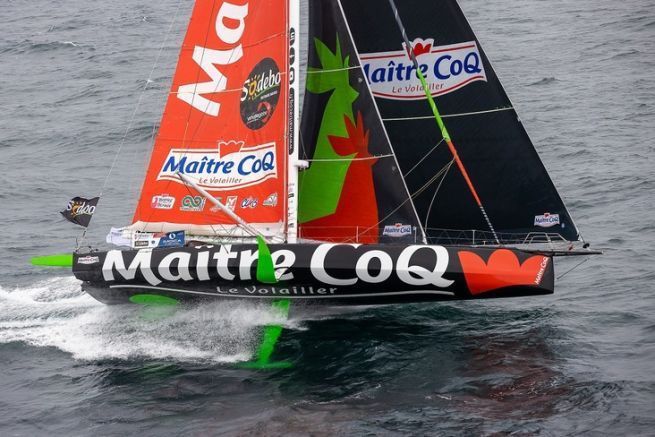 An international jury convened by the Vendee Globe race management has handed down its ruling on the time compensation to be awarded to Jean Le Cam, Yannick Bestaven, and Boris Herrmann – the three skippers still racing who stopped racing to join the search operation for Kevin Escoffier.

A fourth skipper – Sebastien Simon – also joined the search but has since retired from the race.

The search for Escoffier was coordinated by the Vendee Globe race control in cooperation with international maritime rescue services and took place late afternoon and night of Monday, November 30 after the PRB skipper had to abandon his boat around 850 nautical miles south west of Cape Town.

The international jury chaired by Georges Priol established that the searching skippers progress in the race was “significantly altered through no fault of their own, to go and give help to FR85 in accordance with RRS 1.1. The conditions for giving redress are met (RRS 62.1 (C).”

The redress will take the form of a time credit which will be allocated when the individual sailors cross the finish line in Les Sables D’Olonne.

The jury awarded jury awarded Jean Le Cam who ultimately found and rescued Escoffier 16 hours and 15 minutes of compensation. Le Cam currently sits in fourth place in the rankings – 450 nm off the lead.

Seventh-placed Boris Herrmann will get 6 hours back for his part in the search.

Meanwhile, Bestaven – who at 1400 UTC today was leading the race – will receive 10 hours and 15 minutes of compensation for the time he spent searching.

Bestaven on Maître Coq IV is neck and neck with Thomas Ruyant on LinkedOut. The pair are sailing in 25 knots winds at around 53 degrees south. Life at that southern latitude is distinctly chilly as the two leaders press east, running parallel with the boundary of the race’s exclusion zone. They will soon cross into the Pacific Ocean where they are hoping the sea state will be easier and more conducive to higher average speeds than the Indian Ocean has proved to be.

At 1400 UTC today Bestaven led Ruyant by 14 nm with  longtime leader Charlie Dalin languishing 150 miles off the lead after being slowed in recent days by damage to the supporting structure of his port foil.