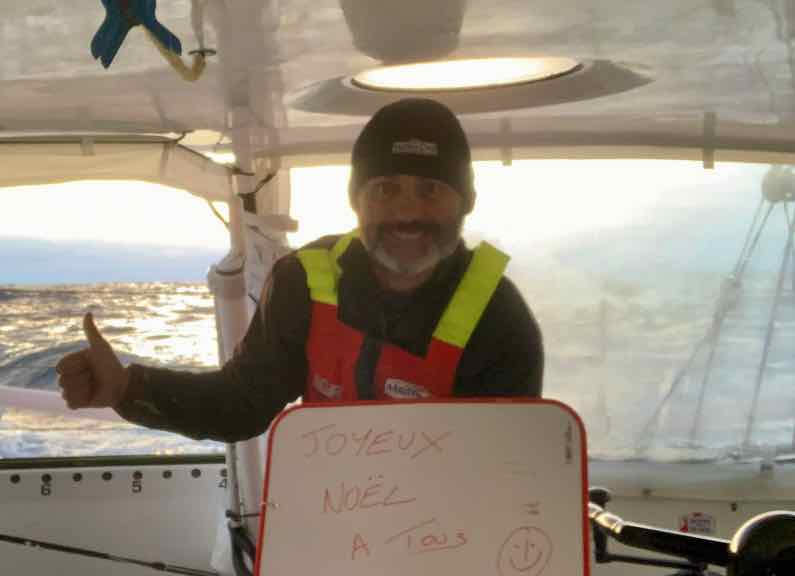 Yannick Bestaven on Maitre Coq IV is back in the lead of the Vendee Globe solo nonstop around-the-world race today after surviving a Christmas Day shuffle that saw second placed Charlie Dalin on Apivia briefly step into the top spot.

Today at 1400 UTC, as the pair headed south east on parallel courses, Dalin was just 29 nautical miles (nm) off the race lead but positioned about 100 nm to the south west of Bestaven.

Based on the evidence of the race tracker Bestaven’s strategy over Christmas to head north upwind towards a low-pressure system looks to have paid dividends. Meanwhile Thomas Ruyant on LinkedOut who also headed north for the time being has suffered significant losses and has dropped to ninth in the rankings.

At the front of a tightly packed group in the south Boris Herrmann on Seaexplorer – Yacht Club de Monaco and Jean Le Cam are trading third place back and forth between them. At 1400 UTC Le Cam’s non foiling Yes We Cam IMOCA 60 had nosed ahead, but by no more than a couple of miles, as the duo drifted along in light wind mode.

However, Herrmann hoping that as conditions return to a more normal scenario over the next few days his foils will give him the upper hand.

“This is unusual to have a couple of days of very light winds, or no wind,” he said. “Once we are done with this in about a day, it goes back to normal and we are dealing with stronger breeze – fronts, wind between 20 and 30 knots instead of between three and eight knots.

“I think the next couple of days can be quite good. The conditions for me for foiling are when the wind is wider than 65 degrees 70 degrees TWA and stronger than 12 knots.”