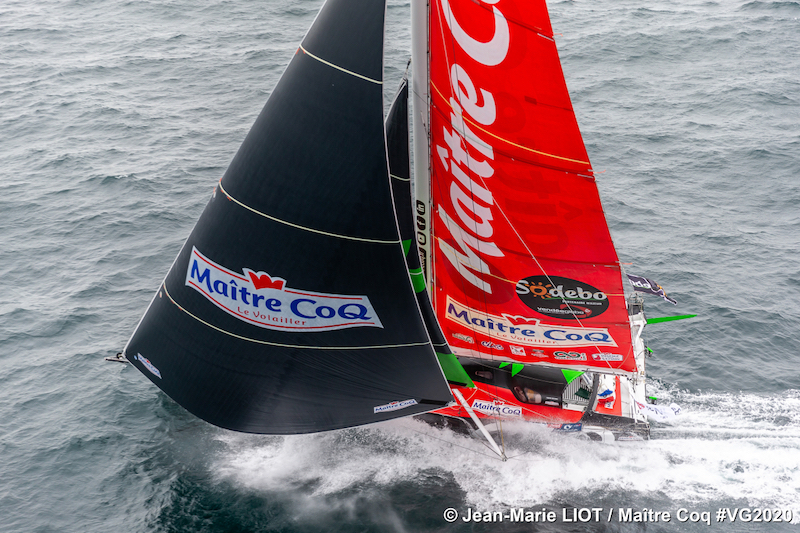 Down in the depths of the South Pacific today Vendee Globe leader Yannick Bestaven is engaged in a high stakes game of chicken as he runs the gauntlet between the race’s ice zone limit in and a gigantic anticyclone to the north which is threatening to engulf him in ultra-light winds.

Behind the Maître Coq IV skipper, second-second placed Charlie Dalin on Apivia has closed up to within 74 nautical miles (NM), while third placed Thomas Ruyant on LinkedOut is 154 nm off the lead.

The problem for all three skippers is that the centre of the system is moving east at more or less the same speed as they are. As the furthest advance, Bestaven stands the best chance of threading the needle between the high and the ice zone.

His best chance is to stay as far south as he can to benefit from stronger winds, but that strategy risks him accidentally beaching the virtual boundary of the ice zone and incurring a time penalty. But it’s a risk that Bestaven seems willing to take as today he waited until his boat was within 3.4 nm of the boundary before gybing away to the north east.

It’s a high-pressure situation in every sense of the phrase for all three skippers and Dalin, today admitted that the stress of the scenario was keeping him awake during a phase when he really needs to be maximising his rest.

“I am under a high level of pressure because my deficit to Maître Coq could transform into 1,000 miles if I cannot manage to out race this high pressure. I am under a lot of stress, trying to sail as hard as I can to be able to stay east of this high-pressure centre, which will travel towards us in the next couple of days.

“I know that if I don’t manage I could end up in a different system to Yannick and lose a lot of ground.

“The weather we have in the Pacific is weird,” he said. “I feel like I am more sailing a Figaro leg than the Vendee Globe. It is full on racing at the moment. I have got as many square metres of sail up that I can have up. It is not an easy compromise to find between getting some rest and trimming the boat to be as fast as possible.”

To ratchet the tension up even further, the chasing pack comprising Boris Herrmann on Seaexplorer-Yacht Club de Monaco, Jena Le Cam on Yes We Cam, and Benjamin Dutreaux on Omia – Water Family, are watching closely to see how the leaders fare in their race with the high-pressure system.

“We are the hunters for sure right now,” Herrmann said, adding to the drama-fuelled atmosphere. “Our question is whether they will escape, or whether we all end up in the same system.”