Skip to content
You are here
Home > Editorial > Vendee Globe: Bestaven leads at Cape Horn with Dalin in hot pursuit 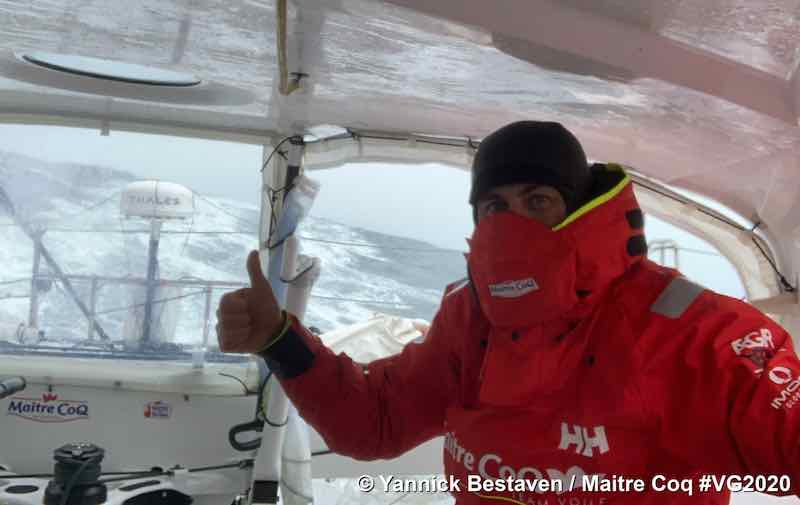 Appropriately, considering that we ended last year with the majority of the world in some sort of forced isolation, French skipper Yannick Bestaven will have been at sea alone for 55 days by the time he rounds Cape Horn today in first place in the Vendee Globe around the world race.

Spending that much time on your own aboard a sparsely kitted out 60-foot yacht, fending for yourself in the face of all that mother nature sends your way is a huge achievement just in itself. To have made it there ahead of all your rivals is the stuff of legends.

What is perhaps most surprising though is just how fresh faced Bestaven manages to look in the latest video he sent from the boat. Compared to my bleary-eyed stare into the mirror this morning after a full night’s sleep in a comfortable bed, Bestaven – who for the last eight weeks has been living on sporadic power naps – looks positively radiant.

The South Pacific Ocean seems intent on giving Bestaven and his closest rival Charlie Dalin – who sits in second place around 11 hours behind – a rip roaring send off as they make their escape into the South Atlantic today.

After several spin outs when his autopilot lost control in the big seas Bestaven reduced sail down to a fully reefed mainsail and J3 this morning as he tried to slow down a little to avoid the risk of nosediving in the big seas kicked up by the intense depression he and Dalin have been riding for the last 48 hours or so.

“I did well to slow and reduce sail because I was going too fast,” he said. “I did two or three broaches and the pilot just didn’t know where it was anymore.”

That’s not to say he is hanging around though; he’s been sitting at around 20 knots consistently as he closes down the final miles to the Horn.

“I’ve been going very fast lately because I’ve seen that the faster you are, the less time you spend in the battle,” he said today. “And I don’t want to stay in it too long. I wanted to stay ahead of the front and only get caught in the storm for a few hours.”

Disappointingly for Bestaven he has been forced to set himself up to pass the legendary rock well offshore to avoid the worst of the stormy conditions.

“I’m disappointed because I do not get to see it on my first rounding of Cape Horn,” he said.
“I think that the sea would not be manageable further north. With the big seas and the currents around Cape Horn, it must be a real cauldron up there.

With the water temperature down at 6 degrees and the violent movement of the boat constantly threatening to slam him into a bulkhead or worse, Bestaven is relishing the prospect of getting some relief in the wind shadow that lies after Cape Horn.

“The aim is to cross the [cold] front as quickly as possible, that is to say at ninety degrees – then we’ll get back to race mode,” he said.

Dalin meanwhile will be trying to minimise the deficit at Cape Horn, knowing that Bestaven will be slowed down by the lighter conditions in the lee of the South American land mass on the way to the Falkland Islands, about 140 nautical miles to the north.

Generally in the Vendee Globe, the skipper leading at Cape Horn goes on to win the race. But with Dalin so close and a fearsome peloton of eight boats hard charging behind him all bets are off on how the final seven thousand miles of this fantastic around the world race will play out.