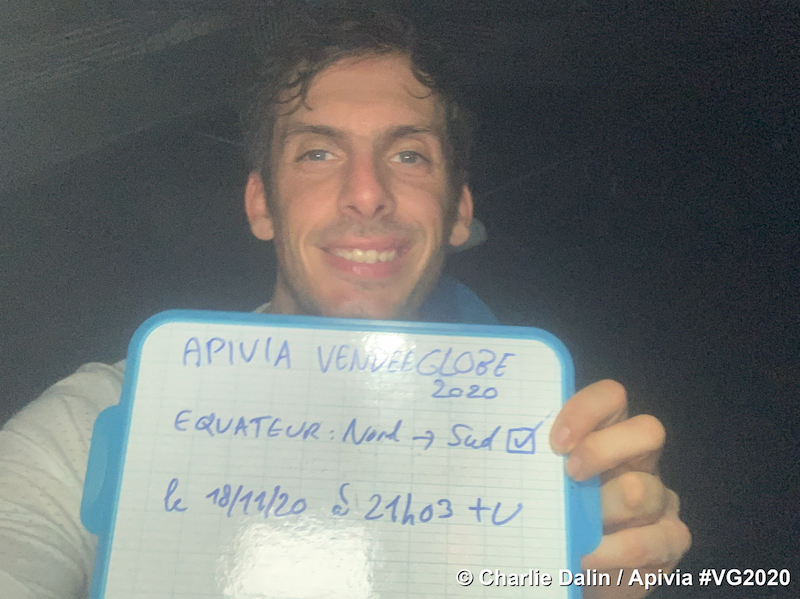 The reaching angles have been opening progressively as the leaders sail south to pass the latitude of Salvador in Brazil this morning with Alex Thomson on HUGO BOSS retaining a margin of just a handful of miles at the head of the fleet.

But as they sail through the latitude of the usual finish line of the two handed Transat Jacques Vabre it is the winner of the 2019 edition of that transatlantic race Charlie Dalin who continues to be fastest of the leading trio.

The Apivia skipper sailed 505 nautical miles in the last 24 hours compared to 467 for Alex Thomson. One of the best Figaro one design offshore racers of his generation 36 year old first Dalin raced to Salvador de Bahia in 2009 when he was second in the Mini Transat that year.

Right now there is no significant pressure on the leading trio Thomson, Thomas Ruyant (LinkedOut) and Dalin, it is about maintaining target speeds and not losing contact with each other as they work constantly at the best route to the Southern Ocean. They are less than 45 miles apart and are dropping fourth placed Jean Le Cam (Yes We Cam!) more and more with each day, the veteran French skipper now being 170 miles behind the leader.

Kevin Escoffier on PRB is still not matching the pace of his pursuers, notably Louis Burton (Bureau Vallée 2) who was less than four miles behind this morning and seeming likely to pass Escoffier who is his wife’s Servane’s cousin.

Escoffier will be looking in the rear-view mirror and so will Sam Davies on ninth placed Initiatives Coeur. The British skipper has the fast advancing Sébastien Simon on the Juan K designed ARKÉA Paprec making up ground after his earlier technical problems not least a climb up his mast.

Simon has been the fastest in the fleet over the 24 hours to 0400hrs TU this morning making 507.3 miles, but was almost oblivious to the background noise when he spoke on the radio call to Les Sables d’Olonne.

“I have made good progress in the past 24 hours, I have gained ground, I am super happy to have be in contact with the train. I slept well, I put plugs in my ears, I’m on the comeback trail.” ! He was 20 miles behind Davies’ transom.

For Stéphane Le Diraison, who entered the Doldrums last night it is a different tune.

Becalmed in the Intertropical Convergence Zone, the skipper of Time for Oceans is frustrated and scratches his skin irritated by the salt and humidity.

“It’s crazy, it’s stiflingly hot. I slalom between clouds and thunderstorms. I suspect the Doldrums are closing in on me. I’m not going to have the chance that the first of the fleet did. I can still see myself stuck there for about fifteen hours” said the skipper of Time for Oceans this morning.

A philosopher and fan of comedy Le Diraison speaks of patience and describes the night sky as fireworks. “Such a moment will pass but it is one to remember,” adds the solo racer who is situated 150 miles from La Fabrique (Alan Roura) ahead and 260 miles from One Planet One Ocean (Didac Costa) behind.

Near the Cape Verdes, where dismasted Nicolas Troussel has been joined by his team in Mindelo, seven other IMOCAs are still heading south, including Clément Giraud on his 2007 Farr design.

“That’s it, I’m getting the measure of my boat,” the Compagnie du Lit – Jiliti skipper reported. “I have some problems with autopilot, but I feel more and more serene. I still have the feeling that the Doldrums will not be fun, I’m a bit wary!

“Even back here the Vendée Globe is in full swing. I hadn’t looked at the standings for four days so as not to put pressure on myself. I saw this morning that I was involved with my little group of boats, it’s good, it gives me energy, ”

Meanwhile, that energy might be sorely lacking for Jérémie Beyou who is sailing alone off the Portuguese coast, 3,000 miles from where he must feel he should be.