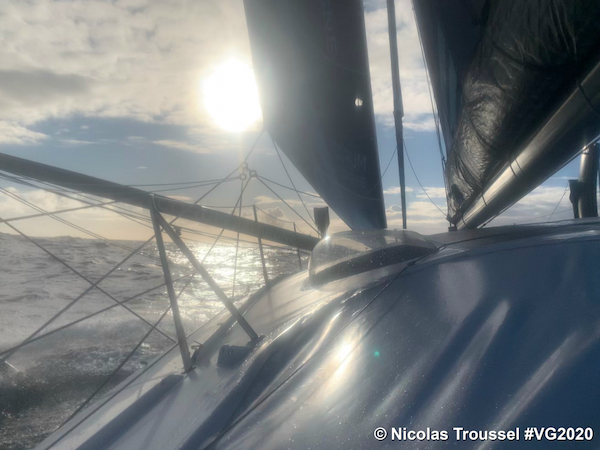 It has been a relatively slow and complicated night at the front of the Vendee Globe fleet negotiating a tricky corner at Cape Finisterre.

At the top of the main group Jérémie Beyou (Charal) and Nico Troussel (Corum L’Épargne) continue to duel 2.6 nautical miles apart at just 25 miles from the Galician coast.

Notably Thomas Ruyant (LinkedOut) and Armel Tripon (L’Occitaine) have elected to tack west, although 19th and 21st to get west away from what is an area busy with shipping and the added stress of the Traffic Separation Scheme.

In second place Troussel reported this morning, “The navigation is not easy, we have to slalom between the ships, the wind is very changeable and we must not do anything stupid.

“I’m fine, we are near the TSS [traffic separation scheme exclusion zone] at Cape Finisterre and so it is not easy. You have to slalom between the ships, it is not easy to sail well at the moment but I’m getting into the game.

“I’m trying to be in sync with the boat, not to do anything stupid and just find my marks, really. The start of the race is always a strange moment, and now really this is my first time racing with my boat, it’s pretty impressive. We got off to a good start are going well.”

The weather situation in the coming days is not easy. At the moment, we are in a very changeable wind in strength and direction, we must get out of this the south-south-easterly wind at Cape Finisterre and then get going upwind during the day. I’m going to be prepared for a stronger wind in the front passing off Spain. It’s a very complicated weather situation.”

Thirty miles further south, Sébastien Simon and Boris Hermann have peeled off to the west to as now have Charlie Dalin (Apivia) and Kevin Escoffier (PRB) and they should be progressively rewarded with a building SW’ly wind.

All the skippers will be setting up as best they can for the first big winds of this Vendée Globe tonight as a front will bring 40kts tonight.

Hooks, halyard locks continue to be a problem. Arnaud Boissières reported yesterday afternoon that he has a problem similar to what initially brought Fabrice Amedeo back to Les Sables d’Olonne. Boissières said this morning he has the offending sail ‘like a sausage’ up the front of the boat. He talks of a last resort of climbing the mast which he will need to do shortly while the conditions allow.

“I started under a small gennaker and the problem I’ve had since yesterday is that I can’t get it down – it’s furled up but still up,” Boissières said. “It’s like having a big sausage forward which slows the boat down a bit. I got downwind to bring him down and I couldn’t, I might have a solution this morning, we’ll wait until daybreak.

“My last resort is to climb up the mast, so I’m going to do zigzags, and that’s not good for performance. The night after this we’re going to have a strong wind upwind, we’re going to look for this front, it will be strong with heavy seas, and then we’re going to tack and make a southerly course. That’s why it really would be good if I could have this headsail down. I approach all of this with a lot of patience.

“I’m a little disappointed, I expected the start of the race go be better, especially since it was a nice start. I know that in a Vendée Globe this is the stuff that happens. It’s not that bad though, there’s no drama. It’s a pain that’s all. I must not it get to me. The first night, I barely slept for an hour. Right now it’s peaceful, I sleep in small half-hour increments. ”

Meanwhile, Fabrice Amedeo is still on stand-by docked at the Port-Olona pontoon. The team got down to cleaning up the cracked halyard exit at the masthead and have fabricated a patch. Amedeo has not yet communicated any details of his potential re-start to the race director. Note, however, that due to the tides the channel will not be accessible between 3 p.m. and 10:15 p.m.

Main image: On board with Nico Troussel/Corum L’Épargne