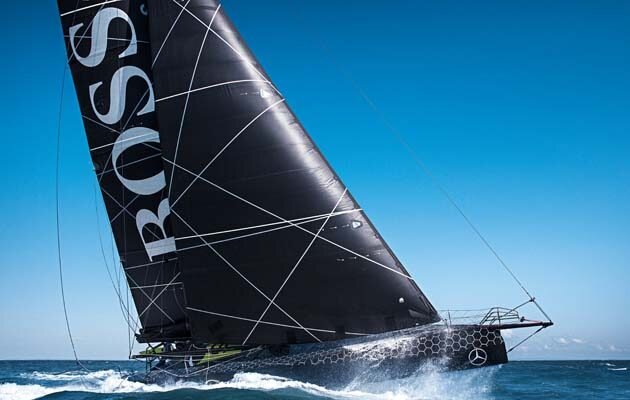 It’s not often that a yacht designer gets the chance to sail an IMOCA designed by his firm over a great distance. But that’s just what VPLP’s Antoine Lauriot Prévost did when he seized the opportunity to join the crew of Alex Thompson’s Hugo Boss on her 8,000-mile return trip from Cape Town to Gosport, England after her unfortunate withdrawal from the Vendée Globe.

Under the remote supervision of Xavier Guisnel, who coordinates the engineering team at VPLP Design, Antoine harvested precious information on how an IMOCA behaves on the open sea. The resulting data will contribute to improving the firm’s tools for analysing performance.

Antoine’s experience will also bring to the table a greater appreciation of the “feel” of the vessel, knowledge which can be leveraged during the preliminary design phases of future IMOCAs.

Enough room below deck for a crew?

“Before leaving, I was a bit concerned about how the four of us were all going to live together for four weeks,” Lauriot Prévost said. “But it turned out that she’s large enough below decks, especially as we alternated watches in pairs.

“Before the trip, it was difficult for me to imagine how the enclosed cockpit works but quickly you realise that it is a real luxury and much easier for the human to operate and perform at 100 per cent.

“And of course Alex is a nice bloke. He’s curious and always ready to share his experience. It was nice to see him totally committed to getting the best out of the boat after the disappointment of the race,” said Antoine.

“We were sailing VMG downwind for much of the 8,000 nautical miles in winds of 10–30 knots and waves up to seven metres. Hugo Boss was specifically designed to be able to foil at VMG angles and it was interesting to monitor the effects of wave height, angle and period on the performance and usability of the boat.”

Focusing on the feel

Coming up against the realities of offshore sailing over an extended period is quite a rare experience for a boat designer – and therefore a precious one.

“Part of the study focused on the ‘feel’ of the boat, information which will prove incredibly useful when we start brainstorming design ideas for the next Vendée Globe” said Antoine.

So, after 8,000 miles aboard Hugo Boss, what sticks in your mind feel-wise?

“First off, downwind she has incredible potential for performance, exceeding the results obtained in our design studies.”

Antoine was also surprised by “the considerable performance loss caused by certain wave configurations, in particular the abrupt variations in speed. You don’t fully realise the impact of the phenomenon on the crew if you haven’t made a long passage.”

In other words, a situation which resembles the real conditions facing a solo sailor in a race, rather than a training session off the west coast of France with a crew.

This long ‘field trip’ was also an opportunity to harvest fresh data for an innovative VPLP project. A little under a year ago the firm launched a research programme to leverage artificial intelligence.

“The idea is simple,” says Xavier Guisnel, “Thanks to SYD, we’ve got a dynamic simulator which can crunch through tens of thousands of runs with different parameters, such as foil depth, rake, keel angle, ballast and all the other trimming possibilities available at sea.”

Such data has been used to provide the skippers with trim tables based on the average speeds obtained by the simulator, and thus purely theoretical.

“The first step is to process the results in a neural network or AI algorithm which gradually grows to understand how the boat works,” says Xavier. “It’s the preliminary learning stage. Then we install the algorithm aboard the boat to acquire real performance data at sea.”

The result is the machine continues to feed on new data and expand its knowledge.

“The idea is to be able to ask it to produce at any given moment, based on real data, the best sail trim to optimise speed,” says Xavier.

After making its debut last year on a Mod 70, the software was then fitted to Hugo Boss for additional development. Aboard the yacht, Antoine recorded runs of about twenty minutes to smooth the data.

Neal McDonald, Performance Manager at Alex Thomson Racing, was tasked with taking delivery of the files and putting them into a form which could be exploited by the firm.

“There’s a lot of computer trickery involved to make it work, but it went smoothly all the same. And using WhatsApp allowed us to talk to Antoine in real time so we could test the various trim settings, such as a little more rake, a little less keel, and so on,” says Xavier.

The development of the programme, carried out in-house by Hugo Roche and deep learning consultants, is far from finished. “It promises to be of great help to the skippers in terms of performance management, especially sailing single handed,” says Xavier.