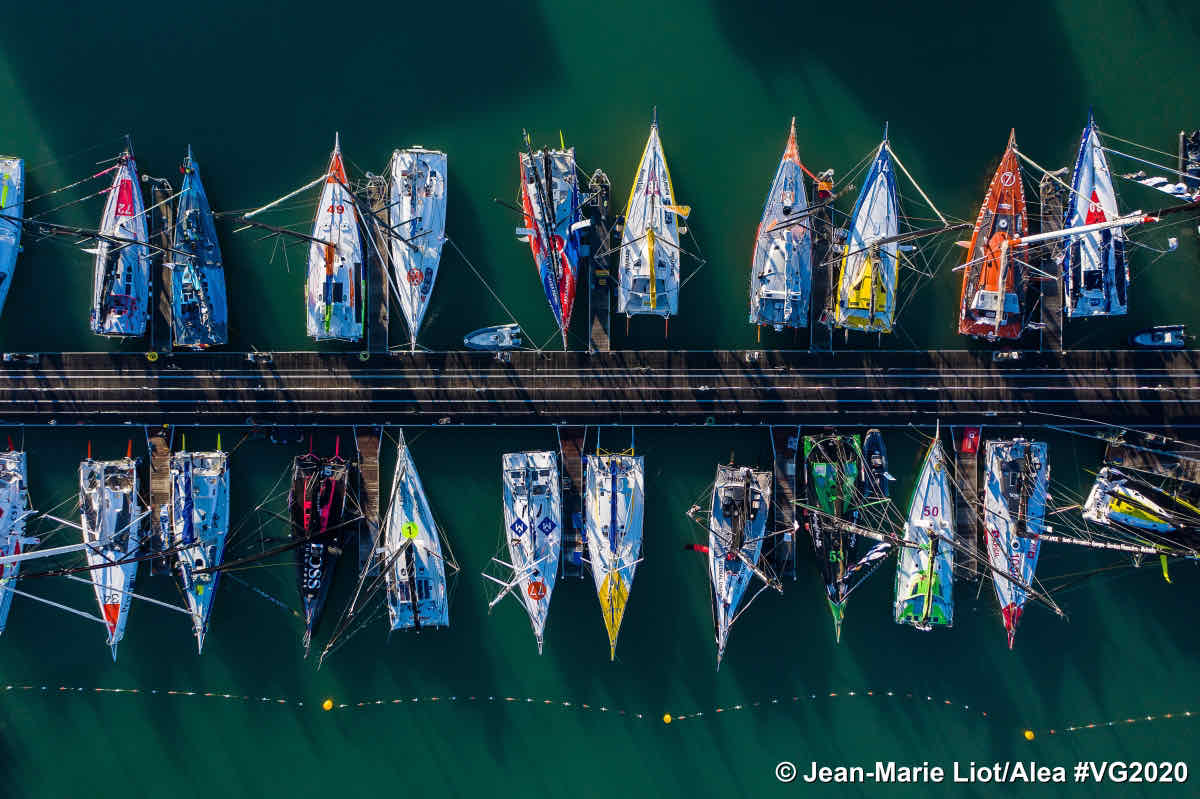 Against an unprecedented global health crisis which brought on many unique challenges, the ninth edition of the Vendée Globe emerged as a triumph, uniting, inspiring and engaging a wider audience than ever before.

The Vendée Globe is always an extraordinary adventure, each edition is unique but none more so than this ninth race, which proved to be particular in the range and depth of the sporting stories, the organisation of the Start Village, the start itself and the finishes.

The first, and some might say foremost victory, was in the race actually starting. The organizational protocols were required to be constantly updated, adapting the Start Village to the ever changing situation, the national State safe event requirements, setting up protocols which ensured the safety of staff, stakeholders, visitors, skippers and teams, culminating in the unfortunate necessity of a start ‘behind closed doors’. 93 per cent of visitors reported that the felt safe with the health protocols put in place.

In the bigger picture it was a difficult year for all the sailing teams who proved that, despite missing out on two pre-Vendée Globe preparatory Transatlantic races, had nonetheless done good preparatory and optimising work, ensuring boats were competitive and reliable. The ninth edition proved that the IMOCA fleet has come on in terms of speed, performance and durability over the course of nearly four months racing on the world’s oceans.

In short the race stood up to the challenges that the health situation brought, it proved to be an exciting sporting event from first to last, never closer at the front of the fleet and with multiple races within the race all the way through the record sized fleet, ensuring that no one skipper was out of touch with a rival or rivals for any significant period of time. An unprecedented 76 per cent of the starters finished the course.

RECORD NUMBERS AT THE START…..AND THE FINISH
This ninth edition saw the largest number of candidates (registered potential projects) (37 vs 34 in 2016), the biggest number of starters (33 vs 30 in 2008) and female starters (six women vs none in 2016 race and two in 2012). And there were the greatest number of finishers: 25 classified on the final rankings and two completing the course outside the race after abandoning.

Foils were in their infancy four years ago, considered as experimental. This time they were bigger, and more powerful and offered a more rounded overall performance, or could be designed to engender a specific strength or performance profile. And the latest generation of boats were designed around the foils in terms of hull shape and structures. These new generation boats had been proven to be significantly quicker during the preceding two years before the race but they were not as convincing over this entire course, but demonstrated big spikes in speeds in certain conditions.

The latest generation foils did well, Charlie Dalin was the first over the finish line, and Thomas Ruyant finished 4th, before time compensations allocated to Kevin Escoffier’s rescuers were applied. These two latest generation IMOCA boats had problems with port foils due to different reasons. On the sections of the race where could use their starboard foils in favorable sailing conditions, these new foilers were very effective.

Reliability among the newest boats requires time on the water. Some of the last generation foilers were forced to abandon, Nicolas Troussel – Corum, the only dismasting on this edition, Sébastien Simon – Arkéa Paprec, after hitting a floating object and Alex Thomson – HUGO BOSS with various structural problems and damaging a rudder.

Others experienced problems which put their races on hold for different periods, such as L’Occitane en Provence of Armel Tripon, DMG Mori of Kojiro Shiraishi. Jérémie Beyou on Charal was forced to return to Les Sables d’Olonne to repair and left again nine days after the others.

Ocean racing with foils is a big topic for future developments and experiments. This Vendée Globe gave teams and designers food for thought.

Older generation boats proved that they can sail very well. Techncal teams who had prepared their straight daggerboard boats well were able to make an impression in the Top 10.

More than ever there is scope on the Vendée Globe for projects which have modest budgets but lots of commitment and drive.

But overall there was a succession of weather phenomena which paused or slowed the race at many different points allowing the fleet to re-compress, compacting back into discrete groups, notably storm Theta at the Cape Verdes, the extension of the Saint Helena High to the very south of the Atlantic which slowed the leaders’ exit into the fast lane east, high pressure zones of light winds in the Southern Oceans, very hard, confused seas in the Pacific and notably a long period of light winds in the Pacific just after Christmas. All these situations kept the fleet(s) compact with big, big comebacks.

Older boats on which skippers were able to harness the full potential showed well.

Louis Burton, on Bureau Vallée 2, the former Banque Populaire of Armel Le Cléac’h which was the winner in 2016, took 3rd place.

Boris Herrmann, with SeaExplorer – Yacht Club de Monaco, a 2016 foiling boat, would have finished on the Vendée Globe podium if it hadn’t hit a fishing boat close to the finish line.

Finally Damien Seguin the first skipper with a disability in the history of the race, with his 2008 IMOCA with straight daggerboards took a formidable 7th place, ahead of eighth placed Giancarlo Pedote’s first generation foiler, and the ninth placed daggerboard boat of Benjamin Dutreux and Maxime Sorel, 10th.

The field for the 9th edition was deep in terms of skippers’ experience and boat ages and designs, but it really also highlighted the diversity of projects and skippers’ profiles.

The rescue of Kevin Escoffier by Jean Le Cam with the assistance of Yannick Bestaven, Boris Herrmann and Sébastien Simon underlined the race’s historic and continuing element of self-reliance wherever possible and the solidarity among seafarers whilst in the long run the time compensations allocated to the relevant skippers had a major influence in the final standings on the rankings.

The race finish has never been closer, the level of suspense was extreme until the finish line, and indeed after the first skippers had finished.

Despite health measures, including physical distancing measures, the Village welcomed 200,000 visitors over the 13 days it was open from October 17 to 29 when the second national confinement.

The Village welcomed 15,000 visitors per day with 5,000 people at any one time. Almost 60% of them came from regions other than Vendée.

There was a strict protocol, with prior registration required and 98% capacity was reached for visits which were required to be less than 3 hours on average.

The good news is that 97% of visitors were satisfied with the e-ticketing.

93% of visitors felt that the sanitary measures were sufficient, more than 95% accepted them very well.

A big thank you is extended to the 285 volunteers who accompanied and guided the visitors.

COMMUNICATIONS REPORT: All the metrics are up

Each year, the Vendée Globe seeks to engage more and more supporters who follow and enjoy the solo round the world nonstop race.

A SITE AND APPS THAT BEAT ALL RECORDS

Compared to the 8th edition, the Vendée Globe recorded 1.3 million more visitors to its website and to its mobile applications (11 million users vs. 9.7 million in 2016).

Audiences are significantly increased on the same websites and Apps:

A VIRTUAL GAME THAT EXCEEDS EXPECTATIONS

Although the game recorded 25% of players from abroad – including a very high proportion from Germany and the United Kingdom – it is a French player who won this year (Jean-Claude Goudon), by setting a new record (69 days 22 hours and 16 minutes).

Finally, it should be noted that 4,471 classes participated in the game, ie 111,775 students, which place the virtual game as an educational support.

A MORE THAN DOUBLED COMMUNITY OF FANS

The media coverage was exceptional despite several elements that did not set a positive backdrop.

The Vendée Globe was placed in a news mix dominated by Covid-19, which led news agendas since last March and there were the American elections and the knock on effects.

Despite these elements, the Vendée Globe held a special place in the news. Many newcomers have discovered the virtues of ocean racing, its skippers and the event.

The reputation of the Vendée Globe is stronger than ever:

Internationally, the Vendée Globe has made a historic breakthrough, based on a study launched on the United Kingdom, Germany, Spain, Italy and Switzerland: the impact is greater than the French impact on the edition 2016 (reminder: 45,000 subjects).

There were 49,000 subjects, all media, on these countries, with 63 million euros of advertising equivalent, and 1.35 billion contacts reached, of which 48% are carried by Germany.

The international version of the vendéeglobe.org site recorded an increase of 6% of its visitors (33% of visitors to the site come from international sources vs. 27% in 2016).

According to the study conducted by Nielsen on behalf of the Vendée Globe, 83% of those polled think that organising this race gives the Vendée Region an international dimension (vs 75% in 2016): + 8 points!

Due to the health context, the Vendée Globe junior educational resources have never before allowed as many people as possible to benefit than in in this 2020 edition, with record results recorded on the website:

Finally, 6,000 educational kits were sent to all classes in schools and colleges in Vendée (4,000) as well as to establishments outside Vendée (2,000), which requested them, including around thirty kits for schools. located abroad (in 2016-2017, 1,500 educational kits – the content of which is now entirely dematerialized on the vendeeglobejunior.fr site – had been distributed to schools and socio-educational establishments).

The organisation has turned a corner in its responsible approaches; with a clear reduction in single-use plastics, a respected commitment to favour national local suppliers (95% of food purchases were made in France, of which 48% in Vendée), and very little food waste was generated thanks to the good management of the event’s restaurateurs, made aware of this subject.

A RACE PARTNER OF SCIENCE WITH UNESCO

To these good practices can be added the establishment of the partnership to support marine scientific research at UNESCO. The Vendée Globe highlighted the importance of this scientific approach to the general public.

Many IMOCA Class skippers are environmentally committed men and women who, on the occasion of the Vendée Globe, were keen to convey messages on sustainable and socially responsible themes: