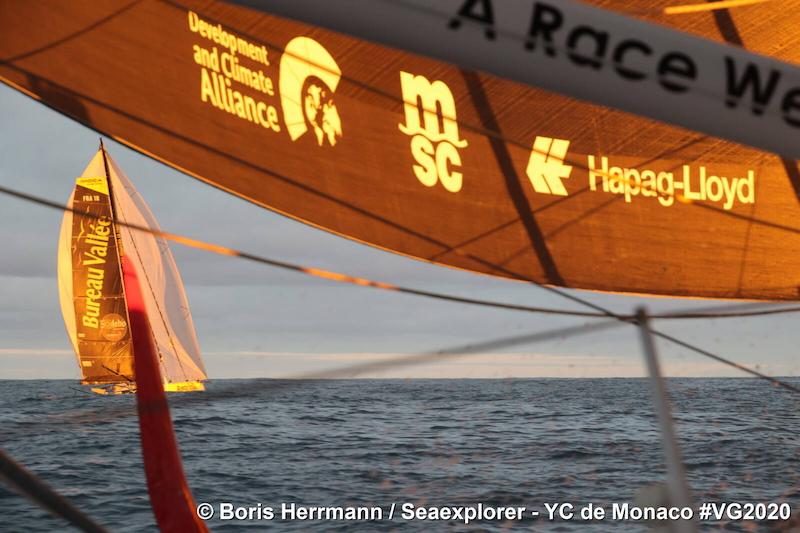 Can there ever have been a more compelling edition of the Vendee Globe than the one that is playing out right now in the far southern reaches of the Indian Ocean? A nonstop solo race around the world without the option of hands-on outside assistance is always going to make for great viewing but this current edition continues to deliver in spades.

37 days after the fleet left Les Sables D’Olonne we are coming up on the halfway stage of the race. Normally by now the fleet is so strung out that the skippers are as much battling the elements and trying to survive as much as they racing against each other.

Not so this time, though. True, there is an east to west spread of more than 4,000 nautical miles (nm) from first to last place, but the battle amongst the top ten boats is as tight as can be, with fewer than 130 nm separating first to third, and then no more than 13 nm between fourth and eighth. Incredibly, some of that chasing group have been close enough to take photos of each other – see above!

The big news over the last 36 hours is that there has been a re-shuffle in the top three with Charlie Dalin dropping off the top spot for the first time in 23 days after having to slow to make repairs to the structure supporting his port foil. That slow down cost him a lot, dropping him to third by 127 nm at 17 00 UTC today.

Despite the loss, the good news for Dalin is that the damage was not apparently as a result of a collision with something in the water and by all accounts the foil is undamaged. The Apivia team are understandably keeping tight lipped about the extent of the damage and about Dalin’s chances of effecting a repair good enough to get him back up to 100 per cent.

With the racing so close, information like that would be tactical gold for his two closest rivals, new leader Thomas Ruyant on LinkedIn – also nursing his boat a little after damage to his port foil – and second placed Yannick Bestaven on Maître Coq IV who is just nine miles off the lead.

This leading three skippers are sailing in formation, heading south east as they dive down towards the virtual boundary of the race-enforced exclusion zone which they are expected to stay close to over coming days by executing a series of energy sapping gybes as they transition from the Indian Ocean to the Pacific.

The leaders are expected to extend on the chasing peloton which is led currently by the indefatigable Jean Le Cam who has clawed his way back into contention after his epic and heroic December 1 rescue of fellow competitor Kevin Escoffier, on who ended up in a life raft after his PRB IMOCA 60 broke up while surfing at speed in strong winds and big waves.

Although 433 nm off the lead Le Cam‘s position is expected to be boosted once an international jury rules on how he will be compensated for the time he lost during the search and rescue operation.

Perhpas most significantly, third-placed Bestaven is also in line for some compensation relating to the Escoffier search. Remarkably he made up more than 300 miles on the fleet during his stormy crossing of Indian Ocean to sit in second place today.

“It is good for our little group as we never stopped,” Bestaven commented today. “We’re going to get wind as we go forward and we we’ll also get more wind along the ice exclusion zone limit. We’re going to continue to build the gap on the group behind – that’s the aim.

“I did not know about Charlie, but I could see he was slowing down,” he said. “I suspected he had a problem, but I think Thomas is doing well anyway. My foils aren’t very big, but they are strong!”