Skip to content
You are here
Home > Advertorial > Unstoppable forces 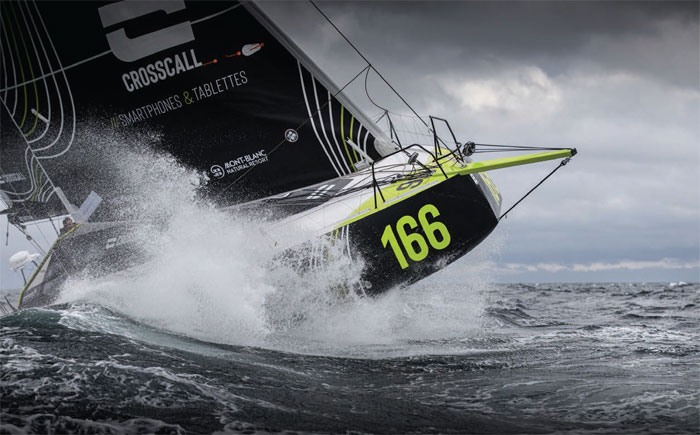 While Class40 design moves forward apace parallel improvements in materials and build techniques are adding a further layer to the relentless improvements in sailing performance and reliability that we are seeing.

When Aurélien Ducroz won the Class40 World Championships last summer, his victory against stiff competition in this intensely competitive fleet was a strong endorsement of his own skills and talent, but also a validation of Crosscall, his radical and remarkable new boat. Kudos is due to the Marc Lombard design office, whose new Lift V2 design exploits the class’s 2020 rule change to the full.

Crosscall’s builder, Grand Largue Composites (GLC), also deserves credit for delivering a boat that didn’t just meet its design weight target but surpassed it, coming out of the moulds lighter than even the design team had expected. And that’s another feather in the cap for Sicomin, which supplied nearly all the materials.

The boat turned out to be faster than Lombard’s VPP had calculated, as GLC’s managing director Xavier Gosselin explains, and since Crosscall’s launch at the end of 2021 it has become clear that the CFD modelling for the Lift V2 design was run at less than its actual top speed. It has also proved to be an excellent performer in light airs, with Ducroz overtaking most of his rivals after poor starts in two of the World Championship races, staged on an often almost windless Bay of Biscay.

But while the boat is showing itself to be a good all-rounder it is conceived and optimised for a specific purpose: winning the Route du Rhum. The Lift V2 is a development of Lombard’s Lift 40 design which Yoann Richomme sailed to victory in the last edition of the race in 2018, crossing the Atlantic from St-Malo to Guadeloupe in 16 days and three hours – eight hours ahead of his closest rival – and establishing a new class record. Crosscall is reckoned to be capable of shaving another day off that record, given similar weather. For context, that’s faster than most of the older generation of IMOCA 60s.

Whilst the new Richomme boat was built by Lalou Multi, Ducroz’s was built by GLC in Caen, Normandy and Gosselin was involved in the composite manufacturing design loop for the Lift V2, working closely with Lombard’s team, before he started building it. A small, independent custom boatbuilder and manufacturer of high-end composite parts, GLC has built Ocean Fifty multihulls and a seaplane as well as five Class40s, high-performance dinghies and the XO range of small cruising and racing keelboats, plus a range of non-marine projects.

Over the last 15 years GLC has earned an enviable reputation for the quality of its vacuum-infused epoxy composite hulls, parts and structures. Since the establishment of the company, Sicomin has been its sole supplier of epoxy resins for infusion, hand lamination and adhesion and has also supplied fibres, core materials and more. ‘We have been using their products since the beginning, we have never had a problem and I would not want to risk trying a different supplier,’ Gosselin says.

Crosscall is also notable for being the first Class40 partially built with natural flax fibre. Ducroz was very keen to use the maximum of flax in the build, Gosselin says, but Lombard – who had to certify and warranty the structure of the boat in ocean racing use – was more cautious. A compromise was reached; the cockpit was designed to be effectively non-structural with the mainsheet loads supported separately.

This allowed the cockpit to be built with a hybrid biaxial fibre that has 50 per cent flax content, which Sicomin had produced specifically for this project. Other elements that incorporate flax fibre include the tunnel, the engine cover, the ballast tanks and the cap. The rest of the boat is reinforced with 100 per cent glassfibre.

Given the enormous stress loads that a Class40 hull must withstand, the extreme danger of any structural failure in mid-ocean and the need to make these boats as lightweight as possible, using even that amount of a relatively unproven material like flax is quite a bold move. That said, the use of flax is an easier choice to make in Class40, where carbon fibre is banned in hull construction to stop costs from spiralling out of control, than in the full-carbon Imoca 60 class where even the most eco-conscious teams have found that using flax for anything more than peripherals like hatch covers and internal parts will have a negative impact on performance.

The fact that Crosscall came out of GLC’s shed weighing less than its design displacement is remarkable, given that flax can easily absorb a lot more resin than glassfibre does unless the infusion process is carefully and skilfully controlled. ‘If we compare the materials flax is twice as light as glass but only half as strong,’ Gosselin says. With the right infusion technique a flax fibre hull can be the same weight as a glassfibre hull and very nearly as stiff, he explains, but its lower strength limits its use in an ocean racing hull that needs to be fully optimised for light weight and high performance.

‘For a non-racing boat with lower performance flax is OK,’ he says. ‘But it’s more expensive today and the cost can be a big problem.’ At this early stage of its adoption, flax is also more time consuming for boatbuilders because, like any new material, they don’t have the familiarity and long experience of using it.

Crosscall’s construction is exactly the same as any comparable boat built in all glassfibre, Gosselin says. Epoxy resin is used throughout as it’s stronger and lighter than polyester or vinylester, and all parts are made with a high-density closed cell PVC foam core. Four different types of glassfibre are used as well as the flax fibre. All of the fibres and foam, as well as the resins, are Sicomin products. 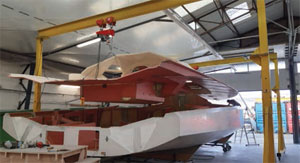 The hull was moulded and infused in one piece and the deck – including the cockpit – was also infused as a single part. The internal structure was then laminated into the hull by hand before the hull and deck were finally bonded together. Epoxy bonding primer makes de-moulding easier and also serves as an undercoat in the polyurethane exterior paint system, which is used instead of gelcoat to protect the epoxy hull from UV damage.

The main infusion resin selected for Crosscall’s construction is Sicomin’s SR 1710. This is a high modulus structural epoxy system with extremely high performance. Designed specifically for infusion and injection, it has very low viscosity and its low-reactivity hardener makes it suitable for large part manufacturing. SR 1710 has excellent mechanical properties, especially its inter-laminar sheer strength and it retains those properties in a wet environment, so it’s ideal for the hull of a high-performance ocean racing yacht.

Sicomin’s SR 8200 was used to laminate the internal structures to the skin of the hull. Ideal for hand laminating, this system includes a choice of hardeners with a wide range of reactivity, which makes it equally suitable for making large or small parts. Its three main advantages for boatbuilding are low toxicity, extremely strong mechanical properties and relatively low cost. ‘During application the low level of odour and fumes is remarkable,’ says Tom Kerriou, Sicomin’s project manager for the Crosscall build. ‘Because the maximum temperature resistance is at least 90°C, the parts need to be post cured to enable them to work at a service temperature of 60 to 70°C.’

The hull and deck are joined together with Sicomin’s Isobond SR 7100. This high-performance adhesive epoxy is specifically designed for composite structural bonding and – crucially for the hull of an ocean racing yacht – it has very high fatigue strength and excellent resistance against the propagation of micro cracks. Thanks to its gel texture it is easy to apply even on vertical surfaces and three variable speed hardeners are available.

Another product that played a very useful role in this build is the epoxy bonding primer, Undercoat EP 215 HB+ supplied by Sicomin’s sister company, Map Yachting. ‘We have been using it for six years and we don’t make any parts without it,’ Gosselin says. ‘It is a good interface between the composite part and the hull paint, it’s easier to de-mould, it gives a surface with low porosity and it’s very easy to sand, much easier than resin.’ It’s normally used as a very thin film but a thicker coat can be applied if there is more porosity on the surface.

Since the launch of Crosscall GLC has started building a second Lift V2 Class40 and a third one is planned. ‘The hull and deck will be exactly the same but we are making some modifications to the internal structures,’ Gosselin says. ‘We have moved the mast step aft by 10cm and the keel is slightly modified.’ The weight distribution will be subtly changed to account for the Lift V2’s higher-than-expected boatspeed, with more weight carried further aft to keep the bow trimmed up when power reaching in big waves.

‘The second boat is all glassfibre because the sailor didn’t want the complication and expense of flax,’ Gosselin says. ‘But for the next one we’re talking about flax again.’