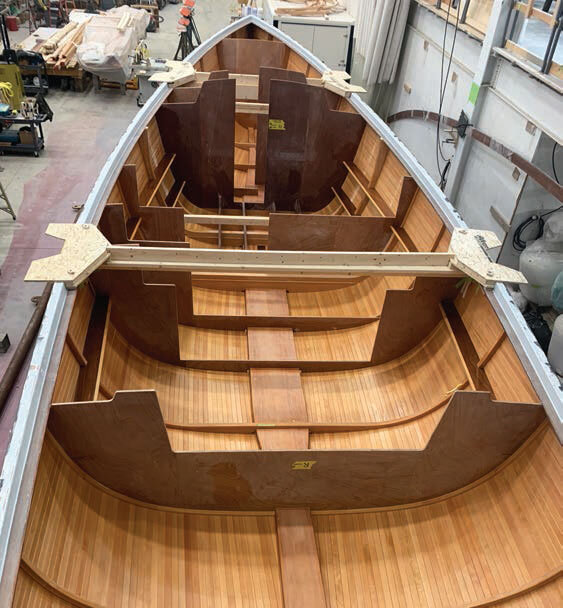 BROUGHT TO YOU IN ASSOCIATION WITH LYMAN–MORSE

For a wonderfully long-established name in the discerning Maine boat building community, Lyman-Morse collaborates successfully with some very modern people.

With more than a century of Maine-based commercial and recreational boatbuilding and craftsmanship infused in their culture, Lyman-Morse began in earnest building sailboats and powerboats with souls over 40 years ago. The new LM46 is a perfect blend of these characteristics, where modern design meets traditional materials, combining uniquely to evoke the soul of modern sailing.

In those days the industry was rapidly evolving from one-off wood construction towards series-built production, and by embracing these innovations the yard grew quickly in size, talent and capabilities. Now Lyman-Morse has expanded to become not only the premier builder of choice on the Down East coast, but to also to service a long list of clients with a diverse variety of skill sets to become a premier brokerage and service operation as well.

What put Lyman-Morse on the map in the late 1970s was when Cabot Lyman picked up the contract to finish converting Jarvis Newman 46 traditional lobster boat designs into private power yachts. Some of the customers for these boats were also sailors, and convinced Cabot that there was a growing market for high quality sailboats in this same size range, a market that was going to help build well-known brands such as Hinckley, Cambria, Little Harbor and Alden.

With Bob and Roberta Schmidt as enthusiastic, supportive first clients, and help from Mitch Neff and Rod Stephens of Sparkman & Stephens, Lyman-Morse became part of this trend when the Sequin 44 class was born with the launch of Hob Nob in 1981. Eventually 15 Sequin 44s were built, along with five Sequin 40s and three Ted Hood-designed Sequin 49s, one of which circumnavigated over 1987-1991 with Cabot and Heidi Lyman and their three sons aboard, and then went on a second world cruise via the South Pacific over 1999-2006.

Meanwhile Lyman-Morse expanded their Thomaston campus with additional buildings and in 2003 acquired a 1500 square metre building in Rockland to take all metal fabrications in-house at Lyman- Morse Fabrication. Here craftsmen and engineers with expertise in stainless, aluminium, bronze, steel, titanium, and plastics not only assist in the construction of ocean-going yachts and marine components, but also provide their design and fabrication talents for municipalities, homeowners, architects, businesses, industrial manufacturers, and more.

Lyman-Morse also entered the modern composites field with the 2006 launch of the innovative Reichel/Pugh 62 Baraka, a fully-furnished yet lightweight cruiser/racer with a lifting keel, built with carbon- SCRIMP epoxy/Corecell laminates. This choice of laminate was made to have both strength and flexibility when pounding upwind for extended periods and thus reduce the risk of de-lamination. Sophisticated hydraulic systems on board were designed to allow for easy shorthanded racing and cruising with just the owner and/or a small crew.

Amidst the construction of many innovative designs in power and sail, another interesting project was the 63-foot Farr-designed Kiwi Spirit built for Stanley Paris to realise his dream of breaking Dodge Morgan’s record of 150 days for a circumnavigation in a cruising sailboat. This Lyman-Morse project also had a lifting keel, water ballast and other systems set up not only for speed but sea-kindliness, safety and ease of handling. Hull construction was in epoxy infused carbon, E-glass and Kevlar with a thermo-formed core.

Lyman-Morse has also worked with Morrelli & Melvin to build Mala Conducta, a 60ft cat designed for high speed yet comfortable family cruising. Her construction was also in carbon, Kevlar and E-glass in both pre-preg and SCRIMP infusion to optimise strength and weight.

Lyman-Morse’s demonstrated proficiency in building high-quality offshore-capable custom and semicustom yachts is well-established with these and other successful builds, and with client interest this has also segued them to take on building fast and beautiful daysailers. One is the elegant 48ft Aileen, with classic lines and beautiful wood trim cleverly married with modern and sophisticated push-button controls for shorthanded sailing.

They have even ventured into hi-tech carbon construction with the 2012 build of Vlad Murnikov’s 8.5m SpeedDream, where a slender, wave-piercing hull with a canting keel and stabilising hydrofoil creates extra righting moment and offsets displacement to produce thrilling multihull speeds on a monohull.

All this heritage in both traditional and cutting-edge construction has led them to now, where there is a new wave of interest in the marketplace for simplicity with sensible comfort and traditional styling, but also high-quality construction and outright speed.

Decades ago it was common for boats you saw in marinas and on moorings in harbours to have an identity beyond just their name, design type, and hull colour. There was, often at just a glance, an immediate impression, which on closer inspection revealed an even greater appreciation for nuances and details – this is more than just a boat, it is a yacht with a soul.

It’s difficult to describe what’s in a yacht’s soul, yet still we know what this means: an appreciation of more than just its aesthetic qualities, also uniqueness and elegance in design, build and the sense of purpose for those who sail her. This is something hard to find in modern series-built production boats, designed and built as they are to tick boxes for a marketing team’s survey results in a quest for maximise both appeal and profit.

Queenstown, New Zealand-based Kevin Dibley first met Cabot Lyman two decades ago when the family was on its second circumnavigation.

‘We had a lot of talks about the best features of what made the ideal cruising boat,’ Dibley recalls, ‘And Cabot’s talk of the boat needing to have a “soul”. For us this meant finding balance in many key areas of design and construction: elegance, efficiency, simplicity, high quality, warmth of feel – all were important whether in new or old ideas.’

Fast forward to 2018, Cabot got the LM46 project going but it is his son Drew who is now president of Lyman-Morse and is building hull #1. These ideas put into play now first bounce around sizing: the boat needed to be large enough for the safety, space and comfort of a small family or a few friends to enjoy either short or long cruising passages or races. A spar with a masthead height limit of 65ft for bridge clearance was important for those trips down the Intracoastal Waterway in the autumn migrations where this inland path is a viable alternative to rough passages offshore. Having a shallow draught option similarly expands cruising grounds in places like the Chesapeake where 80 per cent of the Bay and its tributaries are less than 2.5 m deep. A length of 46ft thus seemed about right.

Years of cruising the world also taught the Lymans many important and practical features of interior layout to achieve soulfulness in design. Lessons such as how onboard systems need to provide a minimum of comfort without being so numerous and complex to compromise on space and the hassle of practical operation and maintenance. The wrap-around design and equipment in the galley, for example, should be sufficient to serve cocktails and a nice meal in the cockpit at anchor, but not have to support a Michelin star chef. And the galley’s design should also be functional and practical to serve meals at sea without losing most of it on the cabin sole…or the headlining.

Upon entering the cabin, the grooved wood panel finishing evoke light, this is not “finishing” or “panels”, but the wood components of the hull structure warmth, and simple elegance so that the outside world whether ashore or at sea seems miles away. The LM46 achieves this in a saloon that is large enough for comfort but not so large that you risk a long fall across the boat when it heels. There are plenty of wet and dry storage spaces and the two or three-cabin layout options will provide the private space needed when either family or couples are cruising or racing.

Perhaps the most impressive aspect of the LM46 is how this blend of traditional practicality and simple elegance in the interior is matched to Dibley’s modern hull, rig and generous sail plan to produce the impressive performance of a yacht with a SA/DSPL ratio of about 24. Even here there is contrast: the sails, rigging and spar parts will use carbon fibre, titanium and other modern materials common to raceboats, yet the hull skin comprises less exotic materials; tongue and groove American Douglas Fir strip planks plus four diagonal western red cedar veneers set in epoxy and vacuum bagged on the outside.

To optimise strength and weight on deck, construction is in a lightweight composite that has the added benefit of allowing for flush hatches, gutter systems to shed water and localised reinforcement for high-load hardware. And underneath, the interior deck surface is finished with painted v-groove veneers and sleek mouldings.

The internal structure is robust with a laminated fir inner keel running the full length of the boat. Deep fir floors and girders distribute the ballast keel loads across a wide area and there is selective use of carbon laminates for reinforcement. With wood construction, the keel bolts pass through the full depth of the floors, not just the tabbing as is common with other constructions.

This monocoque construction produces a very stiff hull, making it fully compliant with ISO 12215 that has been certified by HPi-CEproof Ltd, a World Sailing notified body.

‘We see this boat as having the same appeal and success of the Sequin 44 from years ago’, says Drew Lyman. ‘It draws on the best qualities of modern technology and traditional materials, and will interest those who want to have soul once again in their cruising and racing lives.’