Skip to content
You are here
Home > Advertorial > ‘Unobtanium’ no more 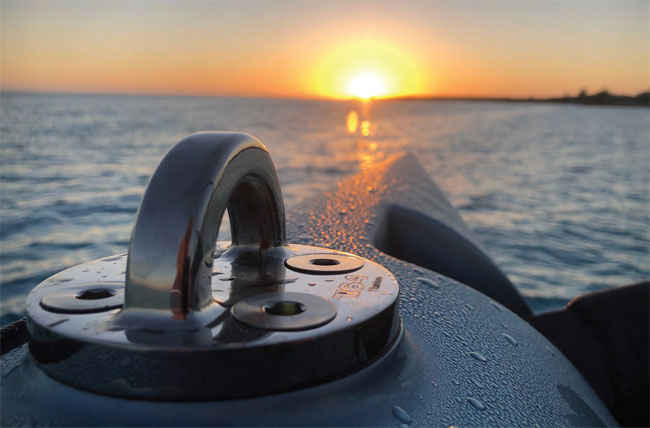 Whisper it – one of the most perfect materials for demanding marine applications is no longer the exclusive preserve of elite racing programmes.

Advances in composite materials and high-modulus rigging fibres in the last few decades have gone far to reduce, if not eliminate, the use of metals on many performance yachts. Aluminium alloys are light, but are soft and can be corroded, and stainless steel is often deemed too heavy for its application strength.

There is one type of metal, however, that may reverse this trend because nothing else can provide such high strength, light weight and extreme durability in a small footprint that also needs to deliver reliability and performance. The team at Ti64, based in Austin, Texas, specialises in working with this unique metal: titanium.

For decades titanium had been considered too exotic for general use due its rarity and fabulous expense, and for good reason: it alone delivers superior yield, tensile and fatigue strength that in alloy Ti-6Al-4V (an alloy that has six per cent aluminum and four per cent vanadium, referred to as Grade 5) is up to 200 per cent greater than 316 stainless and yet 45 per cent lighter. Compared with 6061 aluminum, it is 35 per cent heavier but has twice the strength-to-weight ratio. In the west, during the Cold War, only military contractors with budgets in the billions could afford to use this amazing material, and hence its place in metals mythology.

Given this, recreational use in the past was pretty rare, although enough was found in 1967 to fabricate and graft on a titanium top section of the mast of Intrepid and give her the superior speed she needed to be the only 12-Metre to win the America’s Cup twice, both in 1967 and 1970.

Two decades later in the post-Cold War era titanium started to become more widely available and affordable in a classic trickle-down of technology from the expensive aerospace arena to the everyman, and as the prices dropped, its uses and applications have expanded accordingly. Even a decade ago Apple’s MacBook model laptops featured thin titanium covers.

Taking advantage of this trickle-down, the team at Ti64 has amassed more than 50 years of combined metallurgical and engineering experience in working with this wonder metal, and is pledged to help a wide variety of customers who want high quality and high performance, but not at high pricing. Most of their experience has been in competitive autosports, where the rules are very restrictive, innovations are pushed to their limits, reliability is vitally important and every gram counts. Ti64 has been at the forefront of developing custom and production kits for several car racing circuits and is now found on nearly every vehicle in the Indycar class.

It was an approach from Paul Hand, captain of the globe-trotting Gunboat Phaedo, that introduced Ti64 to the potential that lies in the marine market.

‘Paul was struggling to remove and service his worn-out and corroded aluminum rudder bearings and he thought there must be a better way,’ explained Chris Raeder, founder and president of Ti64. ‘He contacted us, we talked through the design and fabrication options, and built four bearings in Grade 2 titanium. The new bearings fit well and were easy to install, and will easily outperform the original parts to provide years of trouble-free service.’

This was confirmed recently when Hand said that after several years of use, ‘our rudder bearings are still performing as good as the day we installed them. I do a complete disassembly of the bearings each autumn and I do it with such pleasure as I know there will be no corrosion, no stuck bolts, and no pitted bearing surfaces. They are worth every dollar.’

Soon the Ti64 design team was finding other elegant solutions working with the latest CAD CAM and FEA to produce bearings and many other parts where high strength, light weight and durability are imperative to performance.

And unlike the exotic mythology suggests, what is equally impressive is pricing that is within reach of most budgets, especially considering the superior long-term performance that these parts deliver compared to other metals.

‘Many of our customers are surprised at what we can deliver for the price,’ says Greg Pacifico of Ti64. ‘The finished cost of machining a production part will vary from $150- $800 per kilo, and about twice that for custom fabricated parts. This includes all the design, fabrication and finishing steps needed to complete an order.’

When absolute confidence is needed for all the superior qualities inherent to using titanium, this is attractive pricing indeed.