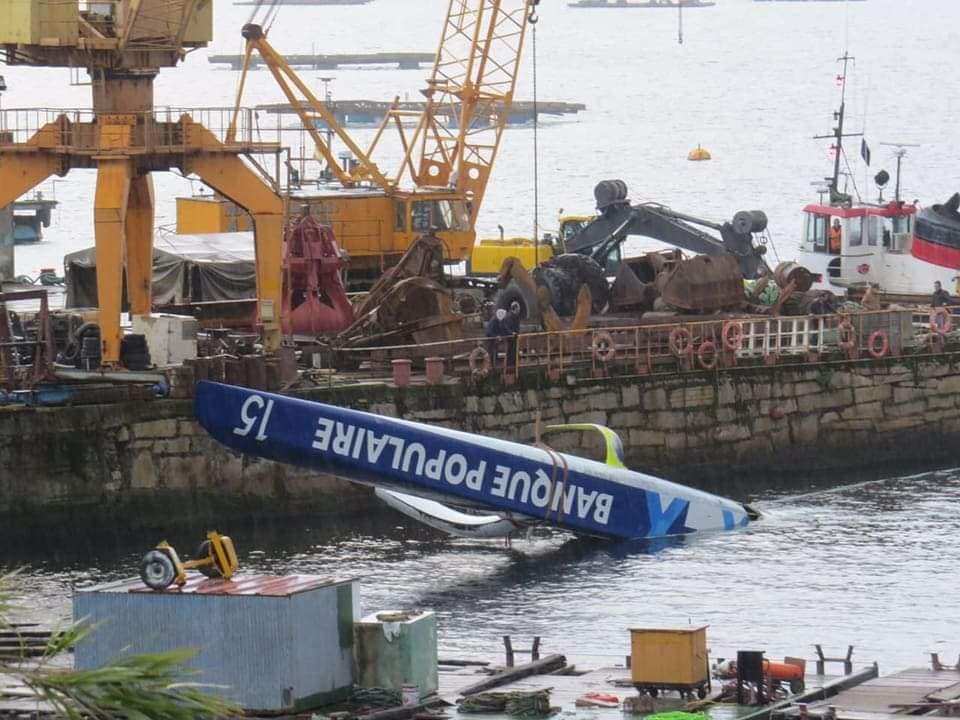 Plans for a singlehanded around the world race in Ultim 32/23 maxi multihulls next year are to be put on hold after the damage sustained by the five Ultim entries in the Route du Rhum transatlantic race.

Details of the Brest Oceans Race – scheduled to start at the end of 2019 – were due to be announced at the Paris Boat Show in December, but we now understand that after discussions between the race organisers and the host city the race has been put on hold.

Perhaps contributing most to this decision is this disturbing set of images of the wreckage recovered from the capsize of the Voile Banque Populaire Ultim trimaran – skippered by 2016-17 Vendée Globe winner Armel Le Cléac’h – arriving in Vigo, Spain towed behind a salvage tug.

As previously covered here only two Ultims – eventual winner Francis Joyon on Idec and second-placed Francois Gabart on MACIF – made it through the stormy opening 48-hours of the Route du Rhum, while Gitana Team’s Sebastien Josse and Thomas Coville on Sodebo both limped into La Coruna in northern Spain with storm damage.

Le Cléac’h also made a stop for repairs before continuing with the race but soon after the support structure for the leeward hull collapsed capsizing the boat and leaving the French skipper stranded in the upturned hull for nearly a day until he was rescued by a Portuguese fishing boat.

In a statement on the team’s website team director Ronan Lucas confirmed that there was no chance of rebuilding the 32-metre trimaran which was launched October 30 2017 and that the wreckage of the boat was to be scrutinised by the insurance company.

“Despite all our efforts, with the storm, the boat is completely dislocated and in its current state its reconstruction is impossible,” Lucas said. “We are all very sad about this outcome when we think of all the people who have contributed to this fabulous project. We are working hard to imagine the continuation of this magnificent story with Banque Populaire.”

What the future will hold for both Banque Populaire and its unfortunate skipper is unclear at this stage. The French bank has a long and illustrious track record in ocean racing – the Voiles Banque Populaire sailing team is set to celebrate its thirtieth anniversary next year – but the company cannot be enjoying having its multi-million Euro boat in the headlines for capsizing twice in seven months.

Meanwhile Le Cléac’h is also understandably unhappy at having to be rescued twice from an upturned boat and is even rumoured to be close to washing his hands of any more Ultim racing.

For his part MACIF skipper Francois Gabart – who had to nurse his boat into Guadeloupe on the Route du Rhum after breaking a foil and losing a rudder – nevertheless remains positive about the future staging of a singlehanded round the world race. Both he and Sodebo skipper Thomas Coville have new Ultims being built for launch next year.

Speaking in an interview with the French Tip & Shaft email newsletter Gabart – who in 2017 set the current singlehanded record for circumnavigating the globe at a remarkable 42 days, 16 hours 40 minutes and 35 seconds – said that a solo Ultim race around the world was “inevitable” despite the poor showing of the Ultim fleet in the Route du Rhum.

“Now I think we have to be smart,” Gabart said. “After a race like the Rhum that has an impact on the whole fleet we must debrief together, we must learn and share the lessons to prevent such breakages that have happened to some, that might go on and happen to others.

“In the end we will make the right decisions that are good for the years to come. This race will take place, sooner or later, it’s inevitable. And it will be beautiful, we will do everything we can to make it happen.”

Meanwhile another Ultim race next year from Lorient around Bermuda and back to Lorient is also believed to have been cancelled as a result of the toll of damage in the Route du Rhum.