Skip to content
You are here
Home > LATEST > Transquadra spéziale! 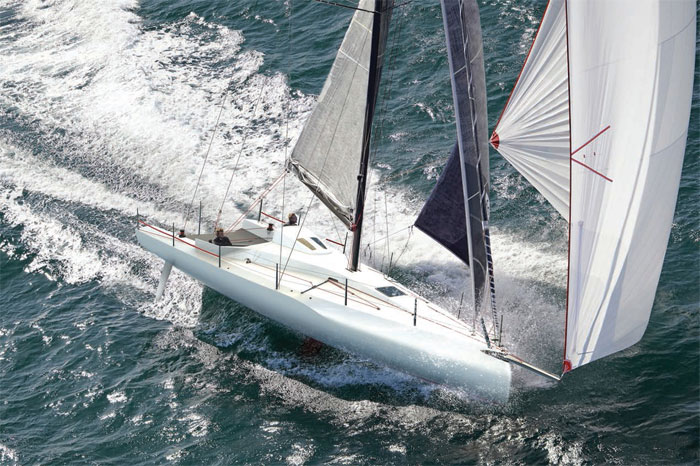 Shorthanded or fully crewed, the smart layout of the BRYD 41 has been designed to cater for both approaches to offshore racing. From the Hamble-based stable of Ben Rogerson Yacht Design (BRYD), the aero sleekness of this twin-ruddered carbon 41-footer oozes speed and purpose. Look more closely at the deck and cockpit layout and you start to see that there will be very few occasions when anyone will need to venture forward of the mast.

Rogerson and his team felt there was a gap in the market for a hybrid in the 40ft range, capable of meeting the growing demand for longdistance double-handed racing but without sacrificing the possibility of competing fully crewed. ‘The concept of the boat is largely aimed at the shorthanded market, and that’s fundamentally the ethos of the boat,’ Rogerson explains. ‘The BRYD 41 has been developed more towards achieving a performing IRC shorthanded design, because I think there’s quite a few options in terms of shorthanded, and, of course, there are a number of high-performance designs like the Class40. But if you want to go and do well under IRC and be able to take part in some of the world’s great offshore regattas, I do think there is a boat that’s been missing from the market.

‘The ethos has been to develop a shorthanded-oriented 41-footer performance design that is optimised to a crew of two up to a crew of six. For the short-handed shorter races, you can take the boat two-handed and go and do your Cherbourg race, of even a Rolex Middle Sea or other 600-milers. But if you’re looking to do maybe Transatlantic or the Round Britain and Ireland, then is it also is quite well-suited to a crew of up to six and running a watch system. So you can continue to push the boat without as much fatigue but still operate in a shorthanded style of offshore mode.’

While there is much to be gleaned from the modern Class40 designs, Rogerson wanted a more open cockpit to suit a larger crew when required. ‘The boat can pretty much be run from the back of the cockpit, but not to the extreme lengths of the Class40 where the cockpit is pushed all the way aft. That makes it very difficult for operating with higher crew numbers whereas this setup will accommodate six comfortably.

‘It’s a very human centred approach and the deck layout is very ergonomic. We have dual pits with all the control systems leading aft to the helming position. So from where you’re sitting, while you’re driving, you can access a large portion of the control systems, which is really useful for manoeuvres and changing gears etc. The extended cockpit means you have space for a full crew, while still being very much oriented to a two-handed setup.’

While the open cockpit is very different to a typical Class40, Rogerson acknowledges the debt to smart Class40 design too. ‘There are quite a lot of interesting systems that we’ve mirrored and taken across into this design. For example, ensuring that all the deck systems are overdeck led, so we can ensure that the boat is kept very dry, minimising white water through the boat and trying to keep the cockpit as dry as possible. All the control systems are led through tunnels to the furling headsails. All the systems are very easy to access, with your J1 and J2 both on furlers. Even a large proportion of your flying sails are on furlers as well. Conservation of energy is very important for shorthanded sailing which is why everything has been designed to be easy to handle from one position. You can very quickly change gears when you need to, with minimum hassle or risk to the crew.’

Talking of risk, safety is on the agenda for the 41-footer. ‘The cockpit is quite enclosed and there are several hook-on points around the boat. There’s no reason to be detached at any time,’ says Rogerson. ‘For the offshore and categorised races, there is good liferaft storage at the back of the boat, which is easily accessible.’

There is a strong emphasis on ease of handling for sail changes and manoeuvres. The idea is if you want to sail a lot freer you have the transverse-mounted tracks which give you a very good sheeting angle upwind, or go to a more outboard setup for cracked sheets very easily without leaving the cockpit.

‘Each one of the sail systems can be locked off with a clutch or constrictor system which means you have multifunctional use of different winches. If you’re doing a complex rounding of a mark and you’re setting up for the next leg then there’s a number of winches that you can bring into play. It’s a very adaptable winch and clutch package which gives you a lot of choice and control.’

Customisation
Depending on the intended purpose for the boat, there are a number of customisation options. ‘Whether the Round Britain and Ireland Race or the Middle Sea Race is your priority, perhaps fully-crewed, or if you’re thinking primarily in terms of shorthanded, there are a few key things you can change,’ says Rogerson. ‘From deck layout, whether you want tiller or wheel steered, to configuring the sail package. As you would expect, a great deal of resources have been attributed to he design and performance analysis of the hull, appendages and aero configuration, the goal has been the development of an optimised but versatile platform that can be tuned between the setups.’

Sail plan
The sail package can be optimised for IRC or ORC, with options for either hanks or furling headsail setups as well as a multipurpose furling J3/staysail providing the ability to change gears with ease and efficiency. The mainsail supports two single line reef systems, with options for lazyjacks to work with the conditions and racecourse format. There are multiple options for downwind sails, including masthead top-down furling A sails, a fractional A5 and a masthead Code Zero.

Interior layout
The BRYD 41 has a minimalist racing yacht interior with a navigation station located on the mast bulkhead. This provides for quick access to the navigation tools, with screens fully visible through the companionway hatch.

The galley is situated on the starboard side supporting options for gas hob or jet boil utilities with ample stowage for supplies. Berths are made up of three carbon fibre pipe-cots port and starboard.

A 30hp Yanmar saildrive engine is underneath the companionway steps, which form part of the lightweight engine cover. The heads is forward of the mast on the port side.

Composite structure
The BRYD 41’s structural design has been refined to achieve a lightweight yet very robust platform that is easily capable of meeting the most rigorous demands of performance offshore racing. With twin carbon rudders and bowsprit, the structure is produced in prepreg carbon fibre that is cured under four atmospheres of pressure in one of two autoclaves at the forefront of composite technology.

Who is BRYD?
Established just over five years ago, Rogerson’s team at BRYD has broad experience across a range of maritime design projects. ‘I was very fortunate in the years previous in another career to work on a number of raceboat campaigns and being a boatbuilder,’ says Rogerson. ‘This also allowed me to do a lot of sailing with some really interesting teams. I set up BRYD as a logical development of that knowledge and experience from the racing world. From the outset we’ve taken a very R&D focused approach. Along with my colleague Stuart Lynes, who’s been there since the beginning, we’ve developed our own in-house design and performance analysis toolset, using our own VPP, and also built up our own RANSE CFD infrastructure using Cadence Fine Marine, which is known for being one of, if not the best solvers for marine applications.

‘To provide a competitive option, we knew we needed to run a lot of the performance analysis in-house in quite a new way. The commercially available software comes with its limitations and we wanted to be able to do our own performance analysis on a whole range of hull forms and configurations. Developing our own toolset has given us the ability to optimise a design much more quickly and efficiently, without the limitations of a more iterative process.’

Alongside this, BRYD is currently involved with a variety of projects from blue water cruisers and performance powercraft to innovation research projects with their team of four engineers and yacht designers, all with a diverse background and expertise honed within sectors of the industry.

‘The sailing and powerboat worlds are very different in some ways, but they are also two worlds that run in parallel. In the end, everything comes down to design and engineering challenges. That variety of backgrounds gives us a different angle to asses a wide range ideas and concepts, and apply some very innovative solutions.’