Skip to content
You are here
Home > Advertorial > Transpac, Transpac Tahiti – or both? 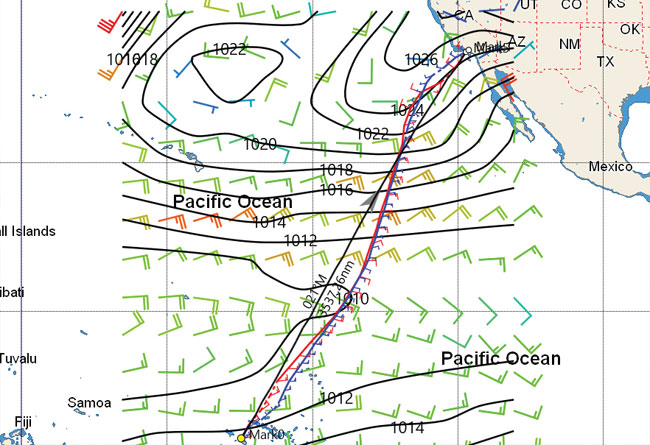 If the biannual Transpac is too short for you, then why not try the Transpac Tahiti which is more than half as long again. Of course you can always do both, like ocean racing veteran John Jordane.

Few of us have not dreamed about crossing clear blue seas and azure skies to arrive in an archipelago of sandy tropical islands and quiet lagoons framed by forests of palm trees. For three centuries this lure of the South Pacific has captured the imaginations of many generations of westerners who have come to regard this as the very definition of paradise.

It was in 1925 the Transpacific Yacht Club first harnessed this allure to organise a race a bit longer than their biennial 2,225-mile race to Hawaii: a 3700-mile race to Tahiti from San Francisco. With a start of only four entries, this bold adventure race nonetheless marked the start of what has been an enduring tradition among oceanic sailors to challenge themselves in long races to paradise.

Even though the start has since moved to Los Angeles and cut down the number of days getting off the cold coast and into the warm trade winds, the race is still run by TPYC at irregular intervals until the demand builds up to hold another. Regardless, the timing and logistics for this race are demanding, and over its entire history only 76 yachts have ever entered this race.

Which begs the question: why do it?

‘The Hawaii Transpac is a sailor’s delight. Other than a possible rough, cold first two or three days, it is a warm, fast downwind run to Hawaii. The navigation is pretty straightforward: a close reach to the desired waypoint to cross the north Pacific high ridge to a chosen isobar (Stan Honey calls it the ‘slot’), then run down the slot across the Pacific until you reach your desired layline into the finish. Every day it gets warmer and the trade winds supply great wind and waves for surfing.

‘The Tahiti Race is a lot different. It is 3,570 miles instead of 2,240 miles. After the start, and rounding West End, you put up the spinnaker, and run for several days southwest past Mexico. Then the easterly trades build and you beam reach in a lot of wind for a few days. Next you have to find the narrowest area of the ITCZ (doldrums), where there will be little or no wind and lots of rain squalls. Once you cross the Equator, the southeast trades will fill in and it can be a very windy, rough beam reach or close reach to the finish in Papeete.

Main picture: this synoptic chart for the 3,570-mile Tahiti Race tells the story: it usually kicks off with a spinnaker run past Mexico to pick up the easterly trade winds, then a cracking beam reach and a tactical challenge to cross the doldrums, followed by more beam reaching to the finish.

‘It’s a much longer race, and can be rougher, but it is well worth the adventure. Even though Papeete is busy with tourists and cruise ships, it is still beautiful, and once you leave Papeete, the other islands are like Hawaii was 50 years ago.’

Jourdane plans to do both races in this next cycle: the 50th Transpac this year on Mr Bill, an Andrews 70, and the 2020 Tahiti Race with a team yet to be named.

In the last race edition in 2012, Karl Kwok’s Farr 78 Beau Geste finished in 14 days five hours, but due to light winds could not get close to the course record of 11 days, 10 hours set by Doug Baker’s Andrews-designed Magnitude 80 in 2008. This record run cut three days off the previous record set in 1994 by Fred Kirschner’s 70ft Kathmandu.

Yet besides the ocean greyhounds hunting down record opportunities, there is another group that may be very interested in the Tahiti Race 2020: maxis, superyachts and those migrating west from their 2019-20 winter season in the Caribbean towards Auckland in time for the events affiliated with the 2021 America’s Cup.

Ocean passage racing for maxis and superyachts is not one of the ‘usual’ offerings in the Pacific offshore racing calendar. Boat captains are typically concerned about the risk of breaking things and the logistics of dockage and boatyard facilities needed for maintenance and repair of the complex systems installed on these magnificent yachts.

Yet for all its bucolic splendour in quiet anchorages, Tahiti also has modern marina and boatyard facilities to act as a suitable stopover destination for transpacific passages to New Zealand. Besides, Transpac Tahiti 2020 is not among the world’s ‘usual’ races – it’s something unique that beckons as a Legend of the South Seas.