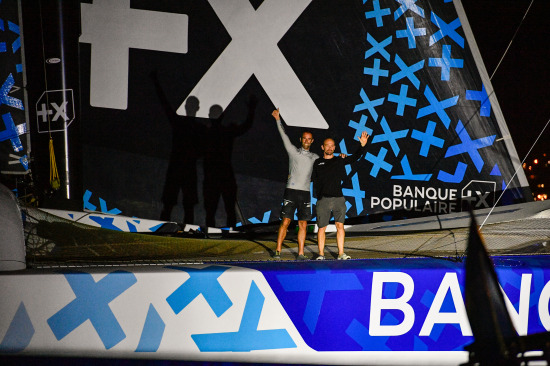 The Ultimes podium is complete. Late last night SVR-Lazartigue took second place ahead of Banque Populaire XI. The leading IMOCAs are due in Martinique on Thursday as the Class 40 make good progress across the Atlantic.

François Gabart and Tom Laperche crossed the finish line to take second place in the Ultime class aboard SVR-Lazartigue. The French pair were 7 hour 56 minutes and 55 seconds behind the winner Maxi Edmond de Rothschild.

Gabart and Laperche set out on this double-handed transatlantic race with a brand new boat, their main objective was simply to get to the other side safely, so their second-place finish in 16 days 9 hours 46 minutes and 11 seconds is a huge achievement.

SVR-Lazartigue, which was built at Gabart’s own manufacturing facility, covered the 7,900 theoretical miles from Le Havre at an average speed of 20.09 knots, but she actually covered 9,333.08 miles at 23.70 knots.

Speaking on the finish line Gabart said, “It feels like a victory. A few months ago, we didn’t even know we would be racing. This morning was crazy, I was crying at the helm, it was so beautiful. There is a great winner up front, but behind us we fought hard. I’m very happy with the boat, it has a huge potential for progress. This may be the last race that Maxi Edmond de Rothschild wins, I hope! They’re a step above us today, but it’s reasonable to think that we can go after them in the next few races.”

About 55 minutes later came the third placed Ultime, Banque Populaire XI. On board were French ocean racing veterans Armel Le Cléac’h and Kevin Escoffier. The blue and white maxi-trimaran, launched only seven months ago, managed to keep up with the pace set by her rivals throughout the course and finished less than 9 hours behind the winner.

Armel Le Cléac’h said, “We were a little frustrated to have been overtaken by François and Tom for second place. But in the end it was a very positive race. We are very happy with the boat. Our friends on Maxi Edmond de Rothschild were untouchable. We still have a lot to learn about this boat and how to improve it.”

Meanwhile the IMOCA fleet is spread across the north-east coast of South America. LinkedOut has won her duel with Apivia and now has a 150 mile advantage and is just 350 miles from the finish.

Defending title holder Charlie Dalin and Paul Meilhat on Apivia will be anxiously looking back over their stern where Charal is sitting only 55 miles behind in third. The battle for that second spot on the podium is far from over.

Only 75 miles separate the leading ten boats in the Class 40 fleet. Redman holds her lead 23 miles ahead of defending title holder Ian Lipinski on Credit Mutuel.

Back in 11th are Britons Brian Thompson and Alistair Richardson who’ve struggled with the boat’s electronics throughout the race. This includes their autopilot, forcing them to steer manually most of the time. As a result they report being exhausted but in good spirits, “We are super pleased with how we are going, especially as our boat is an old design and doesn’t have the new scow bow, which most of the leading boats have. We’ve had to ration food and water because we only had enough for 20 days and it’s looking like it will take 22 or 23 days. It’s very hot below deck and so we’re unable to spend any length of time down there. We’re pushing hard and hoping to make up some more places before the finish. We’re both in good spirits and enjoying the challenge.”

The last boat Arkema 4 is expected in

Expected in Fort-de-France on Tuesday 25h at 07h00am UTC

Expected in Fort-de-France on Tuesday 25h at 06h00pm UTC

Expected in Fort-de-France on Wednesday 26h at 04h00am UTC

Expected in Fort-de-France on Tuesday 25h at 12h00pm UTC

Expected in Fort-de-France on Wednesday 26h at 02h00am UTC

Redman is the first boat expected in Fort-de-France