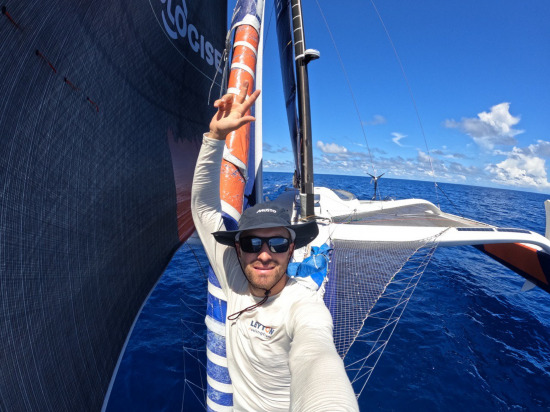 Thirty knot Samba sailing for the Ultimes as the IMOCAs escape the Doldrums. Class 40’s on a Cape Verde slalom course whilst the Ocean Fifty trimarans feel the blast.

Whilst one Ocean Fifty celebrates a birthday, another suffers the huge frustrations of a blown spinnaker, just when it’s most needed.

As the fleet speeds towards Martinique, Solidaires En Peloton-ARSEP has been struck by the sailing equivalent of a pulled hamstring. Thibaut Vauchel Camus and Fred Duthil ripped their large gennaker (an important sail for this final stretch) to the finish line in Martinique. The pair attempted a long and tedious repair of the 25 metre rip saying, “We had to try. We didn’t want to regret not trying”. Thibaut and Fred are currently 5th out of seven and are expected to arrive around the 24th of November.

Meanwhile onboard Leyton there was a double celebration. Yesterday saw them move through the fleet and are now in third just 100 miles from the leader and today is British co-skipper Sam Goodchild’s 32nd birthday (photo above). Although he’ll hardly have time to celebrate – the pair did five gybes overnight which has meant limited sleep and they are currently focused on maintaining Leyton’s 23 knots of speed this morning. “It’s not easy on many levels, physically and mentally, but we’re not going to give up anything for this last stretch.” Goodchild told us this morning.

This is now the most extended fleet in the race with 1,000 miles separating the leader from the back. The leading three boats are leaving the Doldrums. There’s little to separate LinkedOut, Apivia and Charal and the winner will likely come from this pack.

Apivia, co-skippered by Charlie Dalin and Paul Meilhat have been the fastest boat over the last 24 hours and were the first to emerge from the doldrums. Ahead of them is the fast downwind ride up to Martinique with an ETA of Thursday 25th November for the leading IMOCAS.

Over 200 miles further back and still staggering through the doldrums is the chasing pack led by Sam Davies (GBR) on Initiatives Coeur with Charlie Enright (USA) on 11th Hour Racing Team Malama in tow.

Conditions are ideal for the speed-merchants who have covered more than 750 miles in 24 hours and are making lightning speeds of around 30 knots. This trip along Brazil is nothing but pleasure for the Ultime fleet, who “are in one of the most beautiful places in the world to sail, with flat seas and a small beam,” according to Thomas Coville (Sodebo Ultim 3) during his morning call.

Maxi Edmond De Rothschild has a 400 mile lead but still faces 2,000 miles to the finish line.

The leaders have finally turned west at the Cape Verde islands. Redman is out in front and has chosen a route through the islands but their lead is now only 45 miles. Strategy is not their only concern though as co-skipper Pablo Santurde del Arco (ESP) explains, “We’re going to be short of food for almost a week, but we mustn’t let our morale get too low. Given the circumstances, we are pretty happy”.

Croatia Full of Life has made big gains overnight to move into third place. Ivica Kostelic (CRO) and his partner are closely shadowing the leaders but with islands now to port and starboard Class 40 fans will be glued to the tracker to see which of the many possible routes the boats will choose.