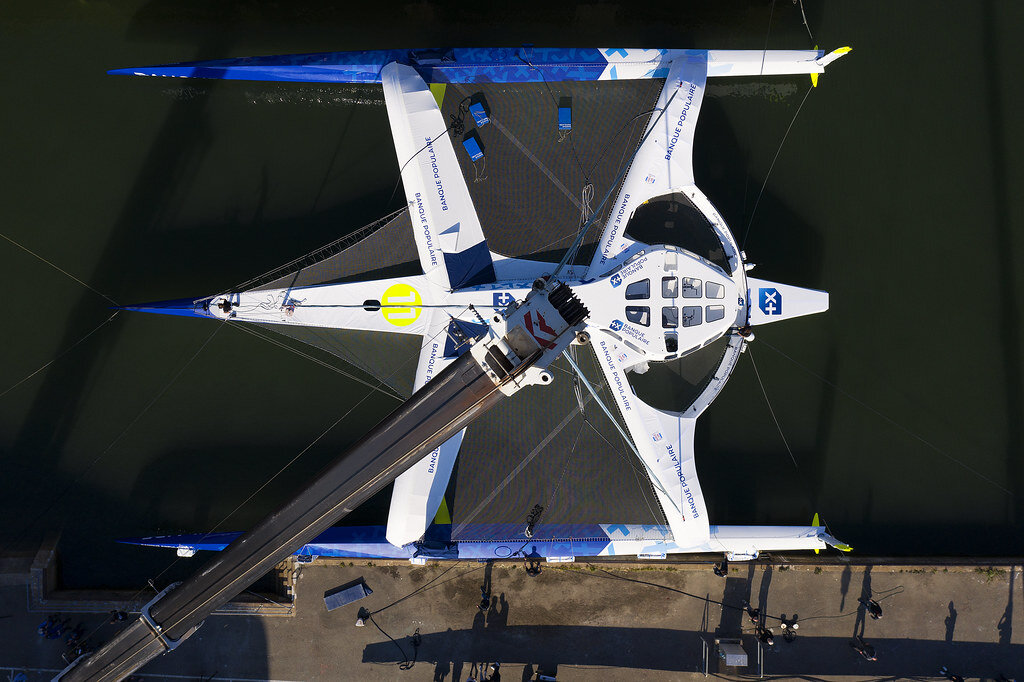 Two years of expert work from 150 individual specialist companies came to fruition this week with the launch in Lorient, France of the remarkable Banque Populaire XI Ultim maxi trimaran.

This gigantic new boat – which will be co-skippered by Armel Le Cléac’h and Kevin Escoffier in this November’s double-handed Transat Jacques Vabre Normandie Le Havre race – is both a juggernaut and thing of spectacular beauty.

Weighing 16 tonnes, the 32-metre-long 23-metre-wide trimaran was meticulously assembled and prepared at the CDK Technologies facility and launched at the Lorient submarine base adjacent to the Team Banque Populaire headquarters.

The design time alone by the renowned VPLP naval architects took 4,500 hours and the entire project is an unashamedly French affair which mobilised the skills of mostly in-country businesses – no doubt giving a welcome boost to this sector in a time of health and economic crisis.

Built in carbon and designed to fly offshore the new boat represents the latest thinking in aerodynamics. Its foils are about twice as large as those of previous generation Ultims and have been designed to maintain high average speeds by maximising flight stability and the ability to adapt to changing weather conditions offshore. Optical fibres run throughout the entire structure to help monitor and control the various elements.

With the boat now launched the campaign moves into as new phase of on the water testing tuning as the team carefully work the boat up for its first competitive outing in the Transat Jacques Vabre Normandie Le Havre race starting on November 7 this year. After initial local sea trials, a tour of the Mediterranean in June followed by a passage to Martinique and back in July are both on the schedule.

“The completion of the construction of this boat which involved so much talent and know-how marks the end of the first chapter,” said Le Cléac’h. “Now we are starting a new one. We will carry out the first tests in Lorient before taking her offshore.

“We have been able to imagine and visualise the potential of Banque Populaire XI in the simulator for several months, but now it is on her real playground that we want her to express herself and show all her abilities.”