Skip to content
You are here
Home > LATEST > Transat Jacques Vabre: Slow going and hard work for the IMOCA 60 crews 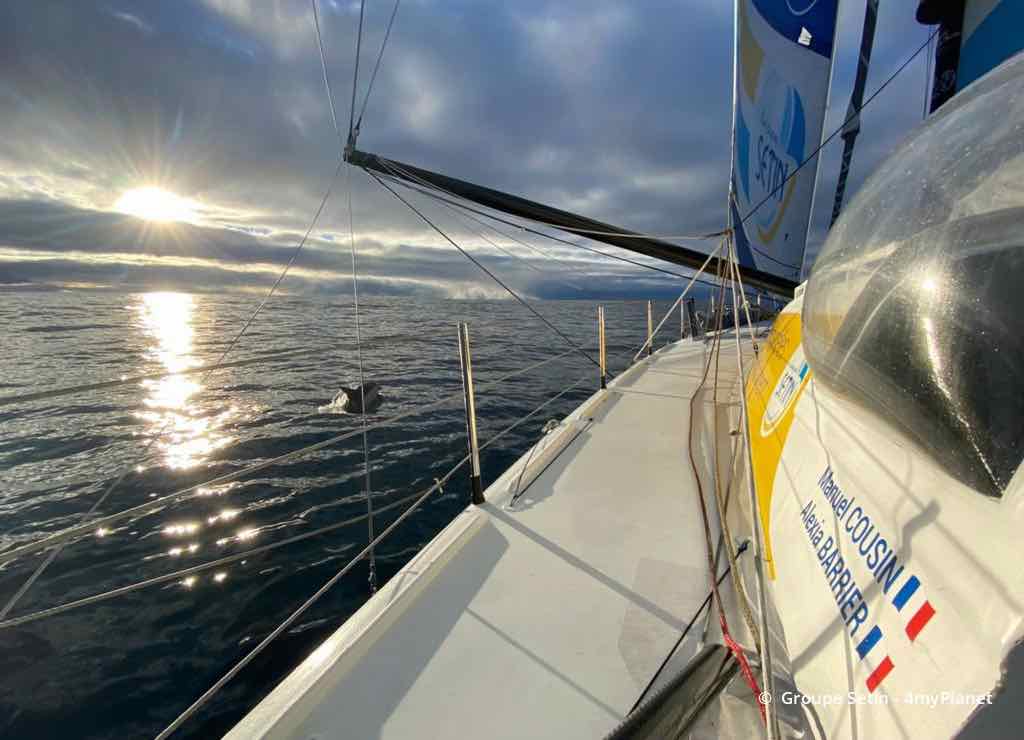 We knew this was going to be a slow Transat Jacques Vabre, but the 15th edition of this two-handed biennial classic has been a real test of light wind sailing for the 21 IMOCA crews struggling to get around Brittany and into the Bay of Biscay – writes Ed Gorman.

After starting in fresh northwesterly winds on Sunday, the fleet saw the breeze disappear as the leading boats headed west past Cherbourg contending with powerful spring tides. Since then it has been a big battle to weather Brest and get into the Bay.

The two notable features of the contest to date have been the dismasting of Bureau Vallée, which brought a sudden end to the race for Louis Burton and Davy Beaudart, and the early dominance of APIVIA skippered by Charlie Dalin and Paul Meilhat.

In fact APIVIA has just completed a move to the east that has seen its 30-nautical mile lead cut to just four miles, as the front-runners finally start to get into new breeze from the east which is enabling them to accelerate to the south.

But the long term outlook for the skippers is not looking at all easy. They are likely to enjoy a fairly fast passage along the Spanish coast and around Cape Finisterre, but then the breeze will start to ease off going down the Portuguese coast.

“It’s going to get very light to the west of Gibraltar– it will be mainly downwind but it is not going to be very fast,” commented Christian Dumard, official weather consultant to the Transat Jacques Vabre. “I would say there are no big options at that point but there will be lots of smaller options – positioning the boats more in the west or the east, depending on their timing.”

All in all, this looks to be a very challenging opening section of this transat with lots of manoeuvres, constant trimming, being alert to local conditions and changes in wind angle and velocity and trying to avoid flat calms.

The British Vendée Globe veteran Miranda Merron, who is not taking in part in this race, has been watching from the sidelines. She says this will have been an exhausting few days for the two-handed crews. “Everyone thinks light airs are just a pleasure but they are actually incredibly hard work. So everyone is going to be really very tired,” she said.

“The plus side is there is not likely to be any sea-sickness and from a material point of view it is pretty good because there are less breakages, but when it is this light it is unbelievably hard work – you’ve got to be on top of it the whole time, that’s the only way to keep going. When you are not trimming you need to be asleep, but I imagine that everyone is studying the weather pretty intently as well, probably more than they would if it was a classic low pressure system,” she added.

What is already clear is that none of the teams has chosen to head west from Brest, with the herd instinct dictating that all of them have decided to take the light and tricky southerly route towards the (albeit weak) trade winds.

Dumard says this is because of the uncertainly over the movement of the big depression out in the Atlantic that would dominate a westerly course. There is also a danger of a large windless expanse of ocean opening up once the depression has moved east.

“I think the problem with the western option is that every day you have a routing that looks good, but if you look at it in more detail, you see that the scenario is uncertain,” said Dumard, “and you could gain a little but lose a lot (on that side of the course),” he added.

Dumard says this sort of weather for the beginning of a Transat Jacques Vabre or a Route du Rhum is very unusual but, for this time of year, not unprecedented. “If you look at the statistics, it is not the type of situation you expect most of the time,” he said. “But it happens – it’s not the first time it’s happened – sometimes in November we have nice weather conditions.”

He was predicting a slow race before the start but says this has been slower than even he imagined it might be. “I would say it’s going to take at least 18 days because they have already been at sea for two days and they are only just around the corner of Brittany,” he said.

Out on the racetrack, the IMOCA fleet has divided into two main groups at the front. The first eight boats are led by APIVIA, followed by Charal (Jérémie Beyou and Chris Pratt) and LinkedOut (Thomas Ruyant and Morgan Lagravière) and then 11th Hour Racing-Malamā (Charlie Enright and Pascal Bidégorry). They are spread over 19 nautical miles with Romain Attanasio and Sébastien Marsset the backmarkers on Fortinet-Best Western.

Right now, the advantage in both groups is with the southern-most boats who are getting into the new wind first and with it the opportunity to build a lead. But the fleet could easily start to compress again once light winds return off the Portuguese coast.