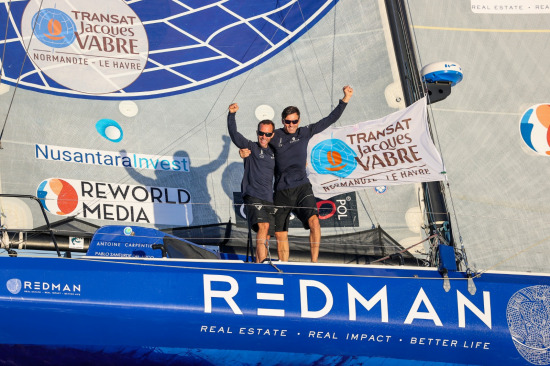 The pair, who started the race as one of the favourites, crossed the finish line of the Transat Jacques Vabre on Monday morning. They completed the course from Le Havre in northern France to Martinique in 21 days 22 hours 33 minutes and 30 seconds, covering the 4,600 mile theoretical course at an average speed of 8.7 knots. Their actual distance covered was 5,502.96 miles and averaged 10.45 knots.

The whole fleet struggled in the light airs that marked the race, especially in the early days. The leaders were bunched together with little to separate them but the Redman pair pulled off a great move at the Canary islands that gave them a small lead, which turned out to be enough.

“We didn’t want to take too many risks early on, which cost us on that first night off Cherbourg. But we worked hard to get back into the game. Once we sneaked ahead it was a matter of controlling the race” said Antoine Carpentier.

Antoine and Pablo maintained and grew their advantage – the result of many hours spent at the helm keeping up with the pace imposed by the Class40s just behind them. Not an easy task given the problems they were having, “We had to steer 80% of the time. On the one hand for performance when the sea was choppy, but also because we didn’t have much energy on board and the autopilot is very energy consuming” admits Carpentier.

Pablo Santurde Del Arco said, “It was difficult, but that’s what we came for. Antoine and I have known each other for a long time, but we have always been competitors on the water. We didn’t have much food, it was hard on the nerves. We had to start rationing two days before Cape Verde.”

The pair returned to the Transat Jacques Vabre with the aim of doing better than their fourth placed finish in 2019. Two years ago, their boat was newly launched and short on testing, this time around Banque du Léman, with its scow-bow proved herself against tough opposition.

Co-skipper Valentin Gautier admitted their second place almost didn’t happen, “We had a scare last night when a spinnaker halyard broke. Spinnaker in the water with the guys upwind going 15-16 knots, we had to react quickly. We managed to bring everything back and after 15 minutes we had a spinnaker in the air again, it was efficient!”

Simon Koster admits it was a race to the finish, “It was tense right to the last minute. We spent all night fighting it out. It was a great race! The fleet was very close together. We were surprised, we expected to finish the race with 5-6 boats, but we were 30 boats lined up”.

Just over 30 minutes behind came Seafrigo – Sogestran to claim third place in the Class 40.

Co-skippers Cédric Château and Jérémie Mion completed the course in 5,399.04 miles at 10.22 knots.

Just a few months ago, Mion was at the Tokyo Olympic Games in the 470. He teamed up with Château, who’s director of the Normandy Sailing Sports Centre in Le Havre, to take on the very different challenge of ocean racing.

Château paid tribute after the race, “Jérémie is someone who doesn’t give up, he’s a bad loser but a very good winner. We are super proud of our Transat.”

Like many in the fleet the pair had to overcome technical issues and the run to the finish line was particularly stressful, “We lost some ground on our Swiss friends when we tore the big spinnaker. To gain places, we had to steer quite a lot to make the boat go forward, we had some small energy problems on board” explained Château.