Skip to content
You are here
Home > LATEST > Transat Jacques Vabre: Race wide open after a week of racing 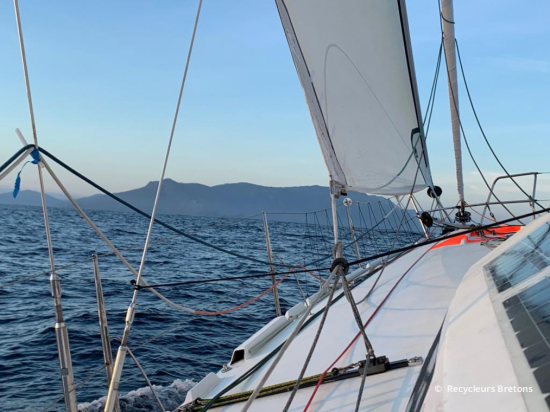 We’re exactly one week into the 15th edition of the Transat Jacques Vabre race. On the whole the racing is close with many of the leading boats bunched close together across the four classes. The fleet of 79 boats has been reduced to 77 with two IMOCAs suffering broken masts. The Class 40s have spent much of the week struggling to cross the Bay of Biscay in very light conditions.

As in a coastal regatta, the Ocean Fifty fleet is sailing in a particularly tight group. They gybed and are on a south-westerly trajectory to Cape Verde.

Sitting in 5th place is Leyton, co-skippered by Briton Sam Goodchild. They are 65 miles behind the leader Primonial but are being cautious in their chase. “We’re not going to risk everything to catch up with the others”, he told us this morning. “We don’t want to let our buddies escape through the front”.

The fleet is mindful that currents and the effects of the islands can create plenty of possibilities but opportunities for error too.

Class 40, “the conditions have calmed down a lot

The Class40s are spread out from Cape Finisterre down to the Canary islands but the leading five boats are separated by just 6 nautical miles. With so little between the leading bunch the skippers will be feeling the pressure as one wrong move could see opponents get away.

“It is certain that once a choice of route through the Canaries has been made then the die is cast”, said Antoine Carpentier from his boat Redman. The second placed co-skipper also told us he’s happy with how things are going.

A move worth keeping an eye on came from sixth placed Volvo during the night. Jonas Gerckens and Benoit Hanzperg split away from the leading bunch for a more westerly route. If they can penetrate the small corridor of wind that exists just to their south then they will have more speed and an opportunity to pass.

The 60 footers are gliding along the west African coast at 13 knots and watching the Ocean Fifty fleet closely. The two classes are racing the same course so the multihulls choice of route will offer the IMOCAs some clues to the best way through the Cape Verde islands.

Briton Sam Davies aboard Initiatives Coeur and co-skipper Nico Lunven have moved into second place and the mood aboard is excellent as Sam wrote last night, “We’re trucking along with the spinnaker up under an amazing starry night. This time Orion is just ahead of us, leading us south! We trickled through the Canary Isles this afternoon with unusually light trade winds, but since midnight we have hooked into some stronger wind. We’re stoked to have passed the Canaries in 4th place – a small celebration took place, cracking open the box of Alex Olivier Chocolates that we have on board!”

The has now arrived in the dreaded doldrums but Maxi Edmond de Rotschild could not be better placed. Franck Cammas and Charles Caudrelier have built a 300 mile advantage on second placed rival SVR Lazartigue. However, Francois Gabart and Tom Laperche know how troublesome the doldrums can be and will be hoping for an opportunity to catch the leading multihull.