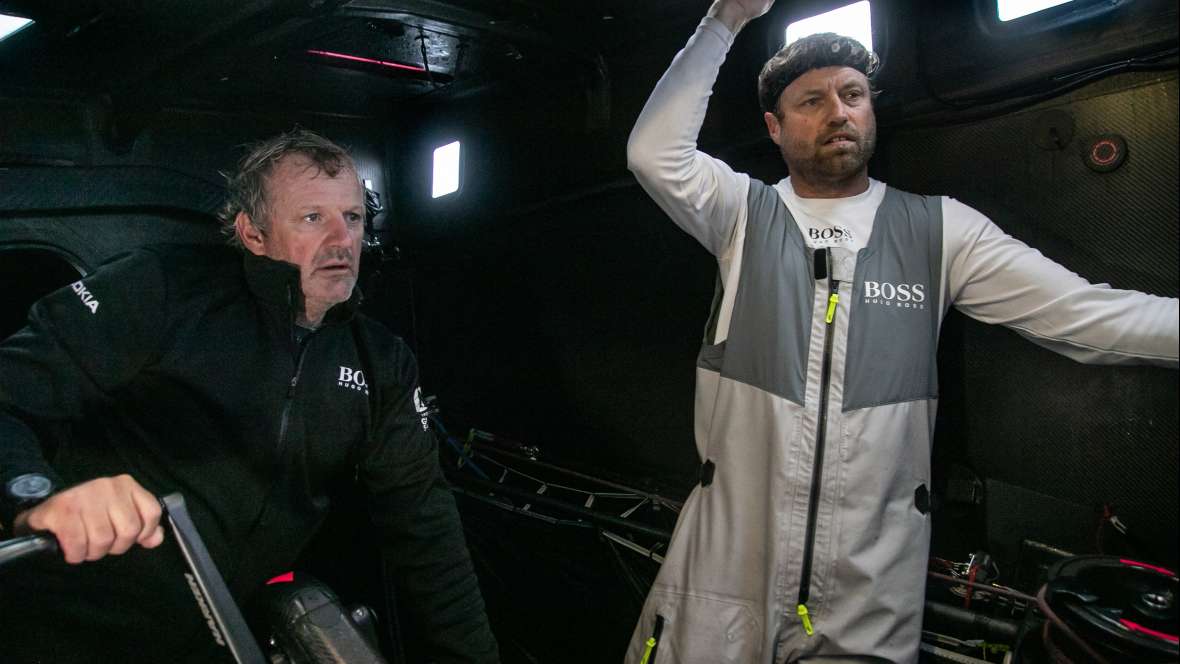 British sailor Alex Thomson and his co-skipper Neal McDonald have been forced to retire from Transat Jacques Vabre double-handed  transatlantic race after a high speed collision with an unidentified object that has severely the keel of their newly launched high-tech IMOCA 60.

The two sailors sustained no major injuries other than some bruising and  are working to stabilise the boat in order to sail safely, hopefully without assistance to the nearest port.

Thomson and McDonald were taking part in the team’s debut race onboard the new state-of-the-art Hugo Boss IMOCA 60 monohull when at At 09:37 GMT on Sunday morning, while sailing at approximately 25 knots, the boat hit a submerged unidentified object in the water sustaining severe damage to its keel and marking the end of the race for the British duo.

Speaking from onboard the boat after the incident, Thomson said:

“We’re not sure what we hit but it was something big under the water, which must have been submerged to have hit our keel and physically stop the boat at 25 knots. The keel sustained a lot of damage and it was left attached only by the hydraulic ram.

“Neal and I are both physically OK. No major injuries, just some bruises. We were very lucky.

“If you were to get into your car, close your eyes, and drive at 40 miles an hour into a brick wall…that’s what it felt like!”

Since the incident occurred, the skippers – with guidance from their technical team shore-side – have been working around the clock to stabilise the keel in order to allow them to sail safely, without assistance, to the nearest port.

“After many hours of trying to stabilise the keel, Alex and Neal are understandably very tired and so we have made the decision that they should take some rest. Together, we will re-assess the situation in the morning. Both skippers are safe on board, the boat is stable, and they are in no immediate danger.

“Once the keel is stabilised, our best option looks to be to sail slowly and safely to the Canary Islands however we will make that decision tomorrow. Right now, Alex and Neal are in no immediate danger, and we are under no time constraints because the boat is currently in light winds and a slight sea state, and this is likely to continue due to the high pressures over the Azores. The boat is currently sailing in a north westerly direction, which it will continue to do throughout the night”.

The incident occurred on what was day seven of the Transat Jacques Vabre Normandie Le Havre, the world’s longest and toughest double-handed transatlantic race which takes skippers, in their pairs, on a 4,350 mile journey from Le Havre, France to Salvador, Brazil. When they hit the unknown object, Thomson and McDonald were a little over a third of the way into the race and sailing around 380 miles to the north west of the Canary Islands.