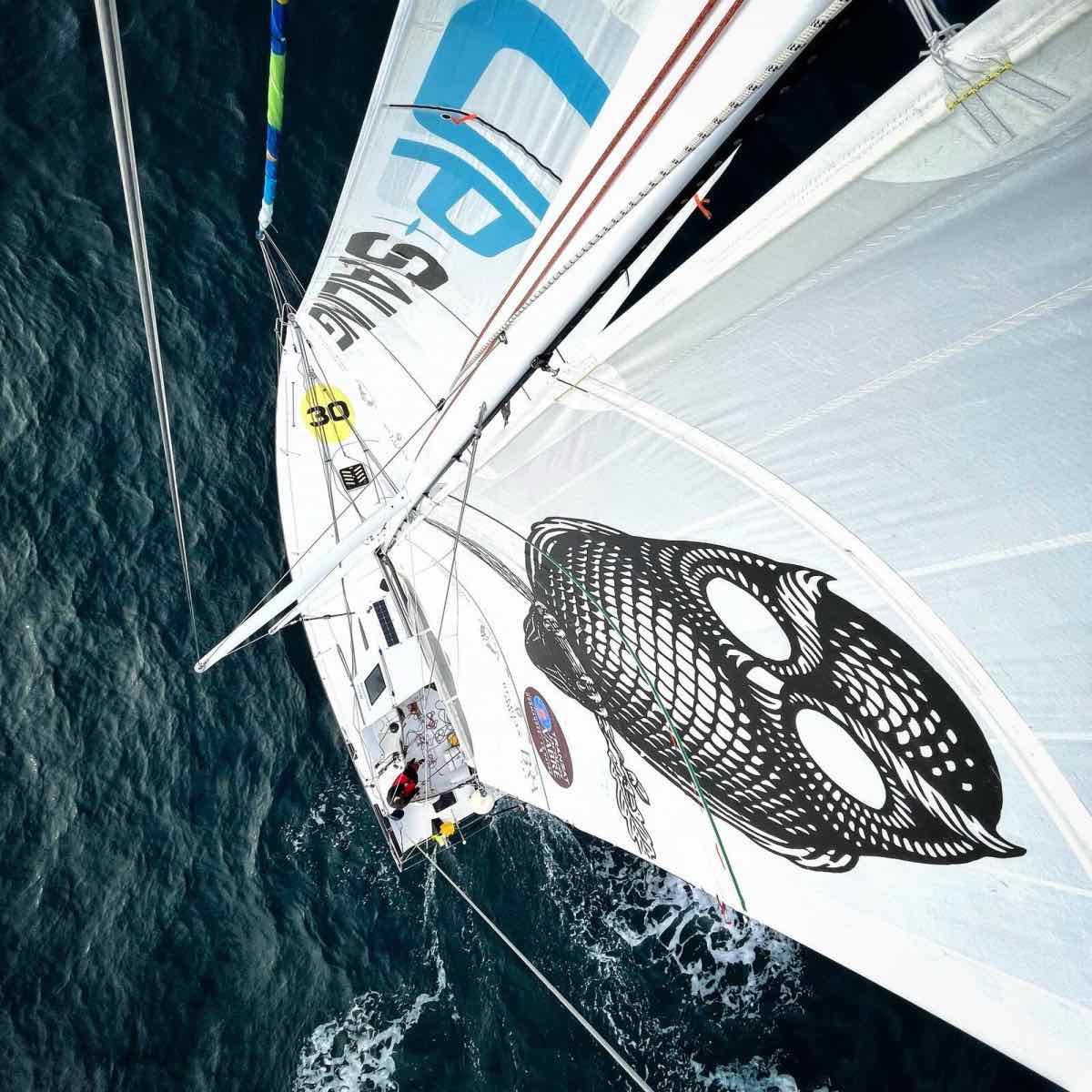 There was a lead change in the IMOCAs this morning but as the Ultimes power south to Cape Verde, many of the Class 40 are stuck again without wind.

Ultime: Cape Verde in their sights

“I feel a bit like a boxer the day after a fight, I have a few bruises, but it’s not too serious, it will ease with time and it doesn’t stop me from sailing again, I’m very happy to get going.” The words of Thomas Rouxel as Sodebo Ultim 3 returned to racing after a 5 and half hour stop in Madeira over-night.

Rouxel and co-skipper Thomas Coville damaged their starboard foil in a collision on Thursday. Team technicians who rushed to the island to help fix the boat have conceded that the foil remains damaged and the boat cannot be sailed “at 100% capacity.”

The four maxi trimarans still racing are continuing their gybing game in the trade winds. They are all keeping up high speeds, between 25 and 30 knots, and are swallowing up the miles faster and faster each day. “We have sailed from Madeira to the Canaries in less than 24 hours and have covered as much distance in 12 hours as we did in the first two days of the race” said Yves Le Blevec (Actual Ultim 3) in his early morning radio session.

As the fleet, led by the Maxi Edmond de Rothschild, continues south towards Cape Verde they’ll be planning for the next obstacle, the Doldrums. Le Blevec explains, “We are heading towards a point, which we will reach in a few hours, where we will have to make a choice. We know when we will have to make a decision, but we don’t know what it is yet. We are waiting until the last moment to get the freshest weather information possible.”

The 7,500 mile course the Ultimates have to follow remains full of pitfalls as Le Blevec is more than aware, “There will be some big options to take on the way to Trindade (the Ultime’s next waypoint) it won’t necessarily be straightforward.”

Ocean Fifty multihulls are about 250 miles behind the Ultimes and are choosing different routes around the islands of Madeira. Some have opted for an easterly route, while four others have chosen to weave in and out of the islands to take advantage of the wind acceleration that comes between two islands.

An additional obstacle has crept into their path: drifting fishing nets. Xavier Macaire on leading boat Koesio explains, “We were forced to reposition ourselves by gybing to avoid these fishing lines. We lost a bit of time but it’s not a big deal, the main thing is that we didn’t get caught up in it. It happened to Erwan on the Pro Sailing Tour, and it takes several hours to get out of it.”

Koesio is expected to reach the Canaries by the end of the day and have another hour or two to decide whether they will take an inside option or a westerly passage, as they did in Madeira.

For the first time since the start, Apivia is not leading the IMOCA fleet. LinkedOut got ahead of Charlie Dalin and Paul Meilhat at 07:00 GMT but there is little distance between them.

The frontrunners are continuing their course towards Madeira in winds that are still unstable due to the high-pressure cell that has dogged the race for days. The 60-footers are playing a game of gybes and positioning themselves at the edge of the ridge of high pressure. The closer they get to the centre of the high, the more favourable the wind rotation and angle, but the strength is less. So, the crews choose to go west as long as they feel the wind is strong enough, and gybe south-southeast to regain pressure as soon as the wind becomes too light.

Sam Davies contacted at the radio session this morning and explained the difficulty, “We are trying to get straight and as fast as possible in the right direction, but it is not easy as the wind varies between 10 and 25 knots. We have to be vigilant about our sail choices and trimming!”

Class 40: the rich will get richer

Here we go again! A shift in the high-pressure zone over Cape Finisterre has forced part of the fleet to go west to try to avoid getting stuck with no wind for a second time. Whilst they struggle, the class leaders are speeding south past Portugal and we will likely see a big gap opening up in the fleet as a result. Jean-Jacques Le Borgne (Les Recycleurs Bretons – Navaleo) explains, “The night was still trying, we had wind for two hours, then nothing again. We had to change sails about ten times and tack according to the moods of the little wind we had. I can’t wait for the trade winds!”

It’s a very different story for those already heading south, “It was a bit hot earlier on as the wind picked up quite a bit,” said Emmanuel Le Roch. But the skipper of Edenred remains cautious, “We see that those behind are keen to come back strong. There are transition zones ahead and everything is not yet clear, in two days time everything can come back from behind.”

The Class40 Project Rescue Ocean is heading to Cascais for a technical stopover. Since Thursday morning, at 8.45am, the boat has suffered from a cracked ball-joint and damaged upper fitting of the starboard rudder. After having considered a technical stopover in a Portuguese port further north, Axel Tréhin and Frédéric Denis managed to carry out a makeshift repair that will allow them to benefit from the strong wind for longer. They are planning an express repair in Cascais and a return to the race as soon as possible.