Skip to content
You are here
Home > LATEST > Transat Jacques Vabre: Just another manic Monday out on the Atlantic 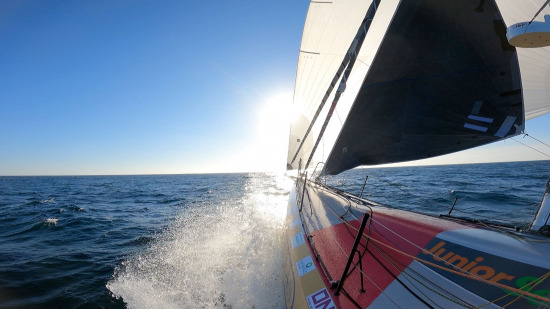 The Doldrums are reducing Maxi Edmond de Rothschild’s lead in the Ultime class, whilst Primonial is extending her lead over the other Ocean Fifty boats. Meanwhile the monohulls are feeling the effects of their proximity to land.

The four leading Ultimes are now in the doldrums. Maxi Edmond de Rothschild has seen her lead of over 300 miles reduced to 90 miles in the last 24 hours as co-skippers Franck Cammas and Charles Caudrelier try to pick their way through this area of light and capricious breeze.

Yves Le Blevec on 4th placed Actual Ultim 3 isn’t getting carried away by his gains, “So far we’ve managed to go fast, straight and not be slowed down, but it’s not going to be that easy going forward through the doldrums”. Le Blevec and partner Anthony Marchand still have 300 miles of doldrums ahead of them, “When we get to the equator, we’ll shift into a different sailing mode as we pick up the south-easterly trade wind that should create opportunities and a chance to catch those ahead. It’ll level things out!”

Ocean Fifty – No stopping them

This morning Primonial has increased her lead by 160 miles, an incredible gain. Crew Sébastien Rogues and Matthieu Souben sailed well to catch the puffs in the tricky conditions faced by the Ocean Fifty fleet. The 50-foot trimaran squeezed through numerous windless areas thanks to a faster speed and a better trajectory, whilst her rivals were forced to gybe and head west and cover more distance.

Whilst Primonial is now well clear of the Cape Verde islands the chasing fleet are passing them this morning. All have passed to the west but Arkema and CGA – 1001 Sourires seem to have chosen an eastern passage. One thing is certain, gybes are still the order of the day for the Ocean Fifty, who are expected to reach the Doldrums on Tuesday morning.

The battle continues to rage among the 60-footers, who are sailing along the African coast in a grouped formation. The fleet is now split in two, with six crews leading the way, followed 250 miles further north by the rest of the fleet.

The positions are changing with each gybe but the strategies are clear; their position so far east and so close to the coast tells us they’re using the pressure off the African continent. They will have to seize the opportunities to shift westwards as they approach the Doldrums. Contacted at the radio session this morning, Giancarlo Pedote, Prysmian Group, explains. “We prefer to go east as the wind is stronger and cooler. We hope that our starboard to west shift will not be too unfavourable. We are happy where we are and have no regrets about our choice.”

One drawback of the eastern route is the heavy traffic in the area. Container ships, small craft and fishing boats throng those waters and not all of them use AIS (Automatic Identification System), so vigilance is required!

So, how will the Class 40s choose to pass the Canary Islands? Options are multiple. Third-placed Volvo has taken the most westerly option, passing between La Palma and Gomera. Redman, Banque du Léman and Edenred are sailing along Tenerife, while La Manche-#EvidenceNautique and Lamotte Module Création have decided on a passage east of Gran Canaria.

Behind them, the fleet stretches 600 miles up the Atlantic. However, there’s an opportunity for the stragglers because forecasts suggest that the class leaders will see the wind disappear when they reach the Cape Verde islands in a few days’ time. “The wind is going on strike again on Friday!” joked Kito de Pavant and Gwen Gbick on HBF – Reforest’Action. “It’s been decreed by the trade-winds union. All the flying fish will be grounded”