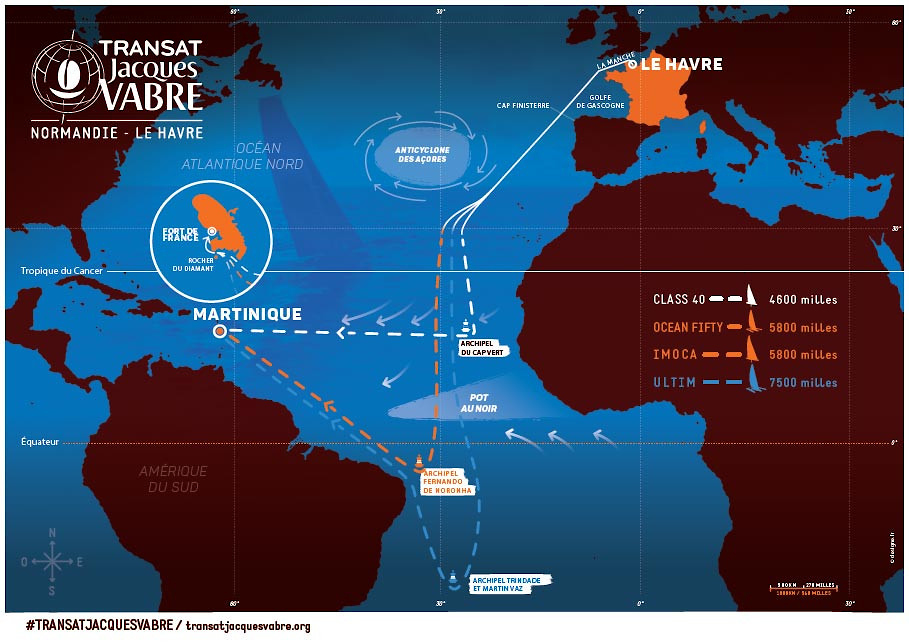 On the eve of the start of the  Transat Jacques Vabre and we can be sure that the navigators in the IMOCA class are watching the weather closely ahead of what looks like being a relatively slow race – writes Ed Gorman.

Christian Dumard, the official weather consultant for the race, says the trade winds are not well-established – he described them as “either very light, or non-existent” – and is predicting the leading IMOCAs are likely to take 17 or 18 days to complete the 5,800-nautical mile course to Fort de France on Martinique.

The 15th edition of the Transat Jacques Vabre looks like it’s going to be a fascinating chess game between the leading boats, and then the older ones fighting it out in the middle of the pack, and the decisions that co-skippers make in the early stages are likely to be critical.

Often this biennial classic has seen big headwinds and rough seas at the start, but this year the fleet will set sail with a nice angle from the northwest and with the breeze blowing at up to 20 knots, which should make for a spectacular get-away on Sunday.

But then comes decision time. With the wind easing in the western English Channel, the choice will be either to head west, where a tough liaison with a pronounced low pressure system awaits, or go south where light winds will make for a slow crossing of the Bay of Biscay.

Dumard says the southerly option is risky because the winds look on the light side for days, as the boats head south past Cape Finisterre and then west. “Some of the models have a southern route and it’s going to be very light winds in the Bay of Biscay and then light trade winds, so it’s going to be pretty slow all the way up to the Doldrums,” said Dumard.

Heading west, however, risks battling into big seas associated with the depression, in a scenario not unlike the early stages of the last Vendée Globe when the soloists had to contend with tropical storm Theta in their path. This system is not as powerful as Theta, but it will still be a rough ride in 30-35 knots of wind and four-to-five metre seas.

“All the models give a lot of wind in the west,” explained Dumard. “But there are different scenarios about what happens with the low pressure – for now it is probably going to be upwind to the low or reaching in the west. Then the boats will go around the north of the centre of the system and from there it could be downwind.”

He also warns that the southerly option could improve: “It’s not looking so easy to cross the Bay of Biscay (now), but it could still change quite a bit by the time the boats take the start in two days’ time,” he said.

As far as the Doldrums are concerned, Dumard says it is too early to make any predictions about where the best crossing lanes might be. He did point out, however, that the second crossing of the Doldrums, as the boats head north to the finish, after rounding Fernando de Noronha, should be relatively straightforward.

As ever with ocean racing, the weather is going to play a critical role in this Transat Jacques Vabre and it looks like early decisions in the IMOCA Class – where onshore weather routing is forbidden – could have a major influence on the eventual make-up of the podium in Martinique.