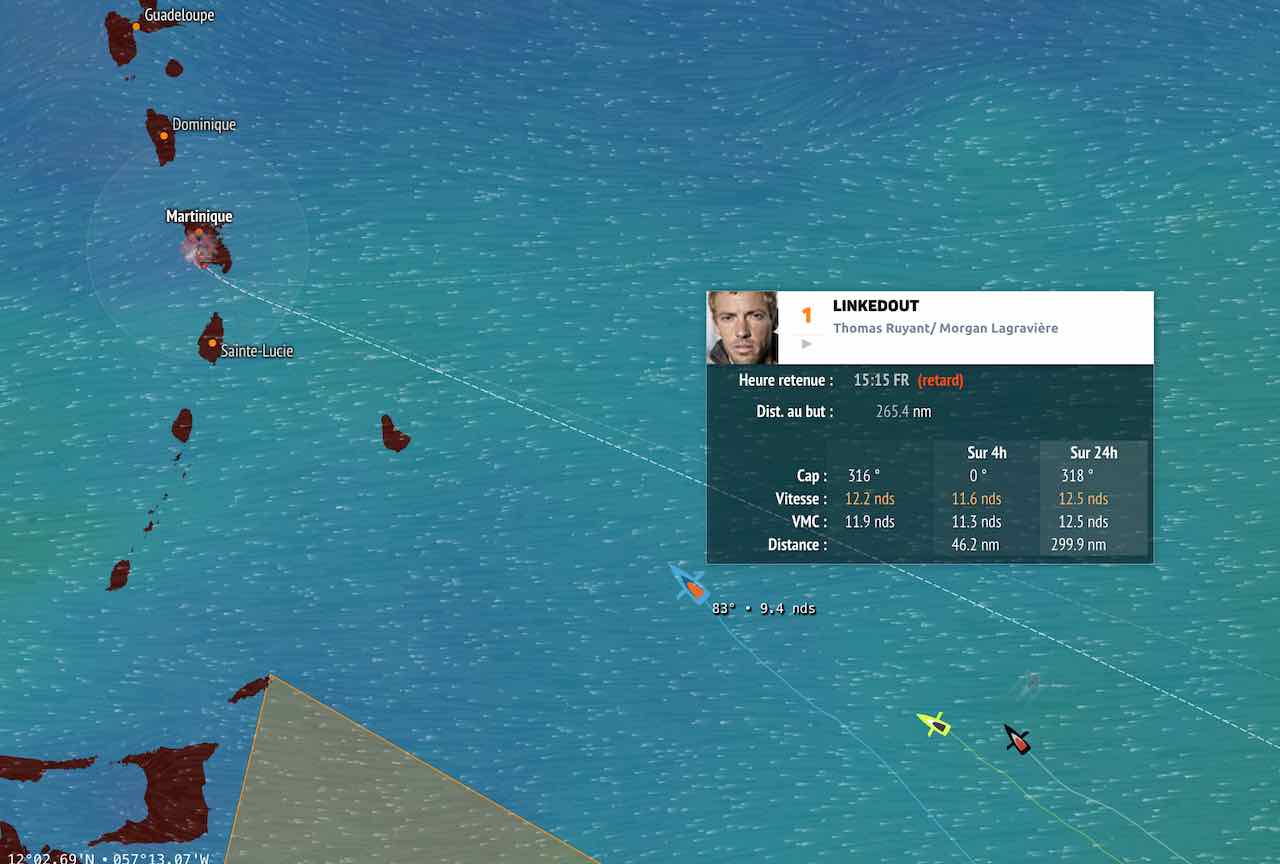 The breeze looks patchy over the final miles to the finish at Fort de France on Martinique, but Thomas Ruyant and Morgan Lagravière are firmly on course for LinkedOut’s first big win in the IMOCA Class – writes Ed Gorman.

With 320 nautical miles still to sail in the fifteenth edition of the Transat Jacques Vabre, the blue and white IMOCA is expected to cross the line on Thursday morning after nearly 18 days at sea in a race dominated by light-to-medium conditions.

This has been an impressive 2,000-mile leg from Fernando de Noronha for LinkedOut when Ruyant and Lagravière have steadily increased their margin over the chasing duo of APIVIA and Charal. With Lagravière focusing on trim and Ruyant on tactics, the pair have been on the pace throughout, showing an excellent turn of speed downwind and then at right angles to the wind.

“They’ve done well – the boat’s quick on that point of sail, there is no question about that – beam reaching on starboard,” commented Marcus Hutchinson, the LinkedOut Team Manager. “They’ve had good fortune with the wind but the two of them together are entirely complimentary and the boat is going so much faster than it was four months ago.”

Behind them Charlie Dalin and Paul Meilhat on pre-race favourite APIVIA have been fighting to stay in touch, but also to keep Jérémie Beyou and Christopher Pratt on Charal behind them. Right now APIVIA is 155 miles behind LinkedOut and 50 miles ahead of Charal, with the minor places on the podium seemingly assured.

None of the leading boats have reported any major technical problems, but we know that all the competitors in a race of this length will have had to deal with a series of issues as the voyage has unfolded. The main problem for Dalin and Meilhat is the fitful northeast trade wind, which is patchy in both strength and direction, and has been making for continuous work on board on both trim and heading.

“The weather is giving us the same problem as the one we had to reach the Equator, with a kind of trade wind failure,” said Dalin. “This forces us to move forward with an ill-established wind. It’s not very complicated in terms of strategy, but the holes in the wind are putting a lot of pressure on us to steer the boat.”

Beyou mentioned that Charal is lacking in performance on some points of sail but he and Pratt are not going to concede to APIVIA until the finish line has been crossed. “We’re still in attack mode,” said the Charal skipper, “we’re not far from APIVIA, but they’re increasing their lead a bit…we’re not giving up, but boats 200 miles ahead at this point in the race are going to be difficult to catch.”

Astern of the leading trio, this Transat Jacques Vabre features some fascinating battles with Sébastien Simon and Yann Eliès on ARKEA PAPREC scrapping with Sam Davies and Nicolas Lunven on Initiatives-Coeur for fourth place. Those two are 700 miles behind LinkedOut but just 15 miles apart with Simon and Elies ahead.

Behind them sits CORUM L’Épargne in sixth place, having overtaken 11th Hour Racing Team-Mālama for a second time on the run from Fernando de Noronha. Co-skipper Séb Josse says he and Nicolas Troussel have been working hard gybing their way on a northwesterly heading close to the edge of the South American exclusion zone and are now in the – albeit uncertain – northeast trades system.

“We still have four or five days to go – we are in the trade winds but they are not steady and we have to manage the exclusion zone and there are currents close to it,” he said. Reflecting on the difficult early stages, Josse said he and Troussel chose the wrong option in the calms off the Brittany coast and realised their prime objective of running in the top-five by Cape Finisterre was then out of reach.

“It was hard because we want to compete but we know each other really well so we did not need to speak about the race,” explained Josse. “We know what happened – we know we made a bad choice and we were not in a good place but that’s it – it’s part of life and part of the race and we’ll keep going and try to go as fast as we can.”

Josse says they have had no major problems on the Juan Kouyoumdjian-designed IMOCA but have been dealing with little things most days. “We knew the first objective to be top-five was gone, but we have kept going to learn the boat, to improve the boat for Nico for next year, as he prepares for the Route du Rhum and then the Vendée Globe, and we are happy to sail an IMOCA 60 and in this transat,” said Josse.

The hugely experienced 46-year-old Frenchman says he is looking forward to a planter’s punch with fresh fruit once he gets to the finish. He joked that he particularly enjoyed passing 11th Hour Racing Team-Mālama, co-skippered by an old adversary, Pascal Bidégorry who, alongside Charlie Enright has been contending with the loss of the fairing off the back of the keel fin. “Of course, it’s Pascal Bidégorry and everyone wants to beat Pascal,” he said laughing.

The 11th Hour Racing Team is now involved in a big fight for seventh place with three boats in a tight group behind them – Fortinet-Best Western, Maître-CoQ IV and Prysmian Group – each looking for any opportunity to get ahead. Sixty miles further back a second group of three boats are just 50 miles apart vying for eleventh place.

That group is lead by Nexans-Art & Fenêtres skippered by Fabrice Amedeo and Loïs Berrehar. They are just ahead of the leading non-foiler in the race – Groupe APICIL skippered by Damien Seguin and Benjamin Dutreux and then MACSF, raced by Isabelle Joschke and Fabien Delahaye. Amedeo is relieved to be heading northwest towards the Caribbean.

“We are gybing and zig-zagging along the exclusion zone preventing us from going close to the Brazilian coast in the middle of the fishing boats, looking for an acceleration of the current and an interesting wind rotation,” he reported. “After the long run towards Brazil, a little bit of calm downwind is welcome, even if the conditions remain tricky.”

It is no surprise to see former Paralympian Seguin sailing a highly competitive race or that he and Dutreux are leading the non-foilers. In that contest Kostum-Lantana Paysage skippered by Louis Duc and Marie Tabarly is in second place 180 miles behind, with Groupe SÉTIN-4MyPlanet in third position, another 160 miles back.