Skip to content
You are here
Home > LATEST > Transat Jacques Vabre: Collisions and duels during a night of action 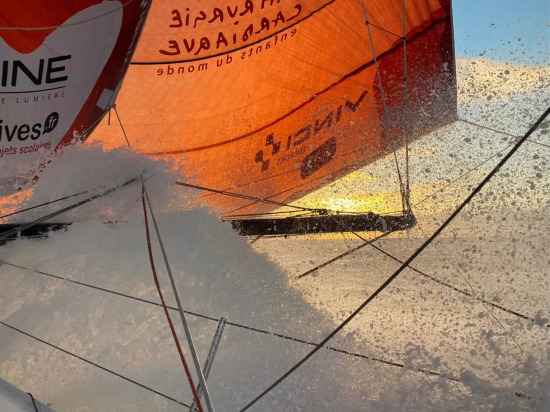 Sodebo Ultim 3 is being assessed following last night’s collision with an unidentified floating object. 11th Hour Racing Team – Alaka’i have officially abandoned the race after yesterday’s dismasting. The rest of the fleet has now split up as the four different classes head south at decent speed.

Last night at 01h00 (French time), Sodebo Ultim 3 hit a UFO, damaging the starboard foil. Thomas Coville and Thomas Rouxel are fine and are safe in the boat. They are currently continuing their race but at a slower pace.

Their rivals in front are deciding on different options as they approach Madeira. SVR – Lazartigue and Actual Ultim 3 have chosen to pass to the east of the island, while Maxi Edmond de Rothschild and Banque Populaire XI will pass to the west.

Armel Le Cléac’h and Kevin Escoffier have managed to catch up with the group, “We’ve made some great manoeuvres and we’re happy to be back in the game. Once again, a lot of things are going to happen” Escoffier said.

The next few hours should be calmer, before picking up speed again as they approach the Canaries, which they should reach by midnight. Escoffier explains, “The trade winds are not established so the descent of the Atlantic will leave room for some play. We’re staying on top of it because the wind is unstable, so there’s quite a bit of trimming to do.”

The weather is getting warmer for the giant multihulls, which is a good sign of progress.

Ocean Fifty: A waltz of gybes

The gap is widening between the two multihull classes, but the 50-footers are fighting back well. They continue to make progress southwards and are now at the latitude of Cape St Vincent. In these conditions of 10-15 knots of wind, downwind, the Ocean Fiftys are fast.

Since rounding Cape Finisterre, the boats have been battling it out by gybing get an advantage on their rivals. “There’s a great fight going on and we’re in the game. We compare our performance every hour. There are a lot of options to take, it’s great”, Benoît Marie (Les P’tits Doudous) explained on the radio this morning.

The fleet of 21 is seeing plenty of one-on-one duels but he biggest is at the front. Apivia and LinkedOut have been battling it out from the start. Charlie Dalin and Paul Meilhat are still in first place, but the gap is narrowing. 30 miles to their north, Initiatives-Coeur and Charal are fighting for third place, and 11th Hour Racing Team – Mālama and Arkea Paprec for fifth.

The pace is changing as they slip south, Morgan Lagravière (LinkedOut) explains, “We are changing our rhythm a little bit as the miles go by. We’re spending less time at the chart table now, which is rather nice because we’re in the game. It’s very positive for the future. There’ll be some good battles over the next few hours.”

Meamwhile 11th Hour Racing Team – Alaka’i reached La Coruña last night following the breaking of their mast. Simon Fisher wrote, “Sadly we will be officially retiring from the race. Hopefully we’ll be back for the next edition!”

Class 40: will pass, will not pass

The 40-foot fleet now stretches over 200 miles. The gaps have been widening since they escaped the windless high pressure zone. The frontrunners have been able to start their descent towards Cape Finisterre, leaving the rest of the pack behind. However the wind remains unstable.

Contacted this morning at the radio session, the crew of Lamotte – Module Création recounted their misadventure of the morning, “We’re in a bit of a mess. The spinnaker went in the water, fortunately we managed to recover it! Everything is fine though. We’re working hard and trying to get the boat moving fast.”

Once back at a decent speed the Class 40s will have to make as much distance as possible because another obstacle is heading their way. The high pressure cell is moving to the south-east and, if they’re not careful, they could once again get stuck in a light wind zone allowing everyone to bunch up once again.