Skip to content
You are here
Home > LATEST > Transat Jacques Vabre: A tale of two races 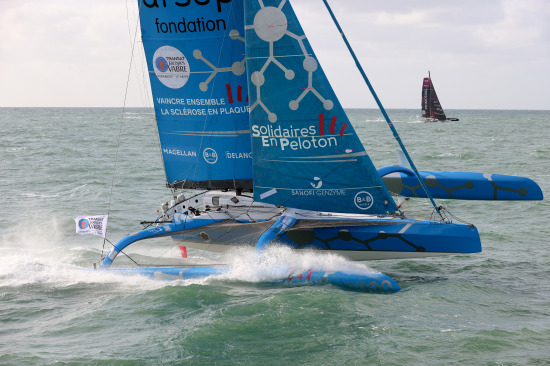 The fastest classes at the head of the fleet have now escaped the high-pressure zone that becalmed them for days, however the Class 40 fleet continue their search for wind in the Bay of Biscay. The separation in the fleet is now significant, stretching over 700 miles.

What a difference a day makes ! Released from the wind-less high pressure, the Ultimes are flying south. In the last 24 hours, they have covered 665 miles, compared to 160 the day before. This morning a north-westerly breeze is powering them along at 25-30 knots.

Last night, the challenge was to round Cape Finisterre. For Francois Gabart on SVR – Lazartigue it meant a few hours on deck completing several gybes. In this morning’s radio session the skipper told us, “We’ve been seeing someone on the AIS (automatic identification system) all the time since the start, it’s quite nice. It’s always interesting to have boats alongside us, it allows us to get a measure of our new boat but also to challenge each other because we always want to go faster than them !”

The Ultime fleet remains close with Edmond de Rothschild out in front with a lead of 10 miles over second-placed Sodebo Ultim 3, and 58 miles over Banque Populaire XI.

Ocean Fifty: the hunt is on

The 50-foot multihulls are now also heading south with Erwan Le Roux and Xavier Macaire on Koesio out in front. With the breeze up the sailors are enjoying the return to fast racing as Thibaut Vauchel-Camus, on Solidaires En Peloton-ARSEP explained on the radio this morning, “We are in competition mode with Primonial, race on! Now, we’re going to continue to work hard to keep up with Erwan (Le Roux)!”

The Koesio crew are fast but still only have a 5 mile lead this morning and will face some big decisions later. Should they follow the coast or head for the middle of the Atlantic? They’ll need to decide before reaching Lisbon.

The monohull fleet now stretches over 288 miles. At the head of the fleet is Apivia, who has managed to extend her lead to 32 miles. Behind Charlie Dalin and Paul Meilhat, the fleet is spreading out across the Bay of Biscay, in small groups of two, three or four boats.

“We’re not too far behind our rivals so we’re trying to hang on to stay with them,” explained Sébastien Simon (Arkea Paprec), currently sixth in the rankings.

Struggling at the other end of the fleet are Antoine Cornic and Jean-Charles Luro (Ebac), who are finding it hard to make it south. In a note from the boat received last night, the skipper said: “It’s difficult mentally to see our friends leaving whilst we’re powerless. It’s a long way to go and we’re fighting like crazy to get the boat moving.”

The 40 footers have all finally now made it into the Atlanti but speeds are not picking up. For the moment, only the frontrunners, La Manche #EvidenceNautique and Volvo, positioned further south, are managing to get some breeze. However, today should see the end of this frustrating and complicated state.

The 45 Class 40s should have an easterly wind again by the end of the day as the ridge of high pressure breaks up. 100 miles to the west of the pack, Polka Dot is the only boat to have separated from the rest. Alex Mehran Jr (USA) and Merfyn Owen (GBR) have decided to look for low pressure systems in the west. They should find winds of 30-35 knots upwind tomorrow as they approach a low. In a note from the crew, they explain the decision. “We are very far from the rest of the fleet! The routings have started to point us west to try and stay in the breeze, especially with the new low pressure systems that are supposed to pass. It was a tough decision to make as no one was doing it in any fleet.” We’ll see if the option pays off for the American-British duo.