Skip to content
You are here
Home > Advertorial > Spinlock Sail-Sense: A Fitbit for your racing sails 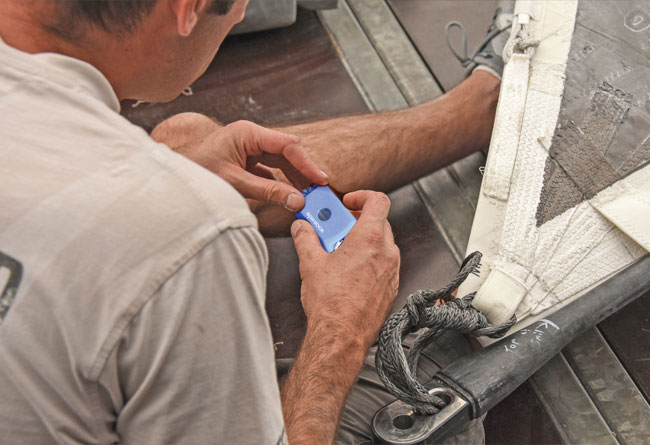 They say the stopwatch never lies and now Spinlock have produced something equally infallible to monitor the real state of your sail wardrobe.

The ability to collect data and produce detailed analytical reports used to be for the experts, yet today quantifying every part of our lives and drawing meaningful conclusions is commonplace. From how fast and far we ran, or the calories burned during a cycle ride, to the number of steps we have climbed and even the amount and type of sleep that we are gaining are typical examples.

In recent years, the sailing world has also benefited from the data revolution as modern technology has filtered through to the sport. But now, an innovative new device from Spinlock has not only provided a new stream of data, but takes the logging process onto a new level and looks set to change fundamentally the way in which we will be able to quantify the life cycle of one of the most important parts of the boat, the sails.

Their new product, Sail-Sense, measures the amount of use that a sail has been subjected to. The matchbox sized, solid state, sealed unit is attached to the clew of a sail and records both UV exposure and accelerations to determine how long the sail has been used for, along with how much it has been flogged. In addition, the unit can also determine which tack the sail has been on and for how long, and can therefore log how many tacks were performed over a period of time.

The unit even knows the difference between the kind of flog that results from the leech line going slack against the type of motion that follows when the sheet is let off, all of which helps to create an accurate picture of what is going on and how the sail has been used and abused.

The unit also has a thermometer inside and has a battery that will ensure it can record this data for more than five years. The system even displays the sail’s last location making it easier to identify where it is in a jam packed sail locker. The recorded data stays on within the Sail-Sense unit and is transferred to a dedicated app via Bluetooth when connected via a phone or tablet.

But in keeping with so much modern data collection, the benefits go way beyond simple curiosity.

At the most basic level, the hours that a sail has been used will be of benefit to sailing teams in assessing whether a drop in performance can be attributed to a decline in the performance of the sail. But, when combined with other onboard data streams the information could also be used to assess the performance of the crew as well as the boat during, say, a long upwind leg against the tide where hugging the shoreline is the required strategy. How many times did the boat tack? How quick was each tack and how efficient was the speed build out of the tacks?

Until now, such a detailed assessment of a team’s racing performance remained largely a seat of the pants affair for all but well-funded, professional grand prix campaigns. Now this simple and cost effective device brings useful sailing data to a much wider audience.

It’s not just the sailing teams that can benefit from the data. Registering the unit with your sailmaker could enable them to keep tabs on the life cycle of the sail and allow them to suggest alterations or replacements.

‘As the Sail-Sense project has developed, the potential for this device has grown beyond the racing market,’ said Spinlock’s CEO Chris Hill. ‘For charter companies the device helps with asset management, while for the superyacht scene, being able to assess the state of sails that are not easily moved and may be elsewhere in the world could be a big advantage. Given the value of some sail wardrobes, insurance companies have also shown interest.’

The move to data collection is not a new one for Spinlock. The company’s load sensors and tension gauges popularised data recording and management. The Spinlock Rig-Sense tension gauge provided evidence, if any were needed, that older, conventional tension measurement tools were not consistent and that competitive sailors could improve their performance by recording, logging and developing their tuning guides with accurate equipment.

‘Sail-Sense is a starting product, already we are looking how it may integrate into other data systems and other ways the basic functions of the sensor can record other information,’ said James Hall, Spinlock’s sales and marketing manager.

So, as data becomes an increasing part of our lives ashore as the “Fitbit” makes its way into modern parlance, so Sail-Sense could become a ubiquitous term for gathering sail data afloat.