Skip to content
You are here
Home > Advertorial > Totally custom made 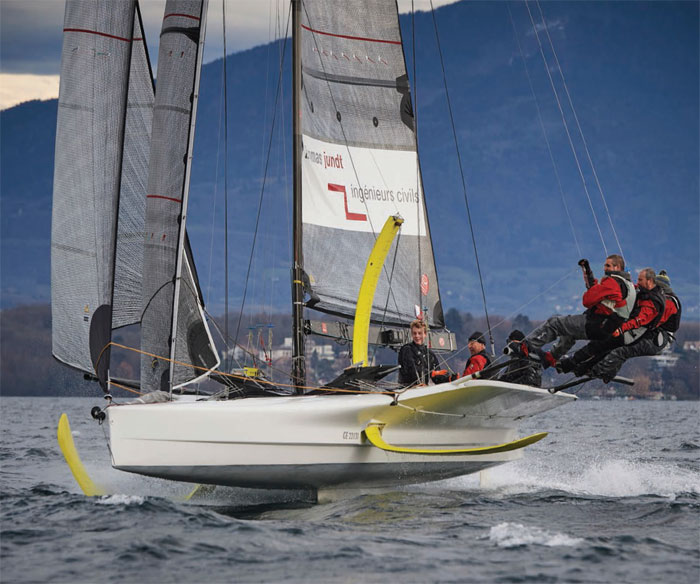 SmartRigging delivers sophisticated rigging to an extraordinary spread of customers from AC winners to International 14s, IMOCAs and giant land-based and offshore cranes. Safe to say they’ve got the hang of it…

Many people might think of composite rigging as new cutting edge technology, but SmartRigging has been building PBO rigging since 2005 and solid carbon rigging since 2010. By now they have serious experience, more than a decade of client feedback and an impressive list of high-profile happy clients.

The company was founded by a passionate multihull racer with the idea to try and prevent metal fatigue in traditional steel rigging. They experimented with PBO cables to be used as standing rigging, and then built a factory to produce them on an industrial scale in Joure in the Netherlands, where the company remains based to this day.

Within two years of its launch the company had become a world leader in the new field of composite rigging, with the initial product adapted to cover all standing rigging needs. A large range of weight conscious high performance raceboats used the initial system, from International 14s to high performance monohull and multihull classes like IMOCAs, ORMA 60s, M2s and Extreme 40s.

The company has built the world’s strongest aramid cable (MBL 17.000kN), and the 100 per cent solar powered production site now builds cables up to 235m in length for the SmartRigging and FibreMax brands. The current production facility in Joure is 12,000sq m. A new production site is under construction 40km away to cope with exploding demand and this will increase the maximum cable length up to 300m.

Industrial cables might be where the money is these days, but this is a company run by passionate and active high-performance sailors and so focus on the sailing side of the business is clearly as strong as ever.

While starting out with PBO rigging, it soon became apparent that carbon would lead to even more performance gains.

The solid carbon fibre rigging product has been further developed and can be built in aerofoil sections where this is beneficial, such as the diamond stays on rotating rigs that are always turned to face the apparent wind (or boats travelling under high apparent wind speeds).

The company now sells a complete range of aramid, PBO and carbon rigging to suit boats and rigs of all shapes and sizes.

Aramid cables are larger in diameter and heavier than PBO or carbon fibre, but are less susceptible to be damaged by bending or shock loading. Aramid cables are used by performance catamaran builders as the leeward side-stays of catamaran masts are often particularly slack and therefore susceptible to the type of bending and shock loading which aramid resists so well.

Aramid is also used extensively for structural furling cables within code zeros and jibs, and the company has been involved in ground-breaking superyacht projects involving the development of systems to store large furled sails on drums installed under the foredeck as well as smaller raceboats such as Class40s.

PBO cables are of similar weight to carbon fibre rigging, with the advantage that they are easier to handle, but with the disadvantage that life-spans are lower than with carbon fibre. PBO rigging is therefore used on smaller high-end race yachts willing to accept more regular servicing and replacement intervals, and who appreciate PBO’s ease of handling when boats are regularly trailered or shipped around the world.

For performance-orientated boats that don’t need to be packed into a container on a regular basis solid carbon fibre rigging is the obvious choice. The product beats aramid on weight and PBO on longevity, with the only real disadvantage being the difficulty in handling and transport. The weight savings compared with wire or rod rigging depend on the size of the boat but are in the range of 50-80 per cent.

SmartRigging’s precision-winding techniques ensures that load is shared more evenly throughout their cables than that of their competitors, leading to higher breaking loads and a longer design life for a cable of any given stiffness or Young’s Modulus. Cables can be load tested using in-house test-bed.

The thinnest fibre rigging available is suitable for replacing 4mm wire. SmartRigging manufacture their own end-fittings from titanium, and keeping this production in-house gives them the flexibility to tailor products to both ends of the size spectrum. The smallest boat they are currently working on is an 18ft catamaran, although a higher profile example is the revolutionary QuantFX lake foiler which has pushed the boundaries of weight reduction throughout design and manufacture of the entire boat.

But what makes SmartRigging stand out from other composite rigging manufacturers? ‘Our key competitors have been bought by sail and/or mast manufacturers,’ says SmartRigging’s head of sales Constantĳn Weber. ‘Commercially it helps them a lot, as the sailmakers who own them obviously recommend them. But we have a huge amount of very specialist expertise here at SmartRigging, due in part to revenue brought in by the industrial arm of the business, the best manufacturing equipment on the market.

Our products are totally custom made, which means we can make relatively cost-effective aramid rigging for small sports boats but also super-high-end products as well. In short, we have an expert team who can deliver cost-effective solutions on short lead times which are individually tailored to the exact need of any given client.

‘The build-quality has helped us win business with some of the world’s most prestigious superyachts and some of the world’s most prestigious yards. Recent series-build examples using our carbon product include the Baltic 67, the Maxi Dolphin 62 and the innovative Botin-designed Maxi Dolphin 55 featuring a runnerless Marstrom rig and SmartRigging’s aerofoil profiled rigging.

‘When it comes to superyachts the magnificent F-class Gio (ex Firefly), which was launched in 2011, has just undergone a full refit after 11 years to carbon rigging. Refits are a significant part of our business, and we have recently replaced the PBO rigging of the 63m schooner Athos with carbon rigging as well. In addition, McConaghy 60s, HH44s and Kinetic 54s all use SmartRigging stays,’ Weber explains.

If it’s good enough for the America’s Cup team, then it’s probably good enough for anyone. Within the sailing world, recommendations don’t really come much better than that.