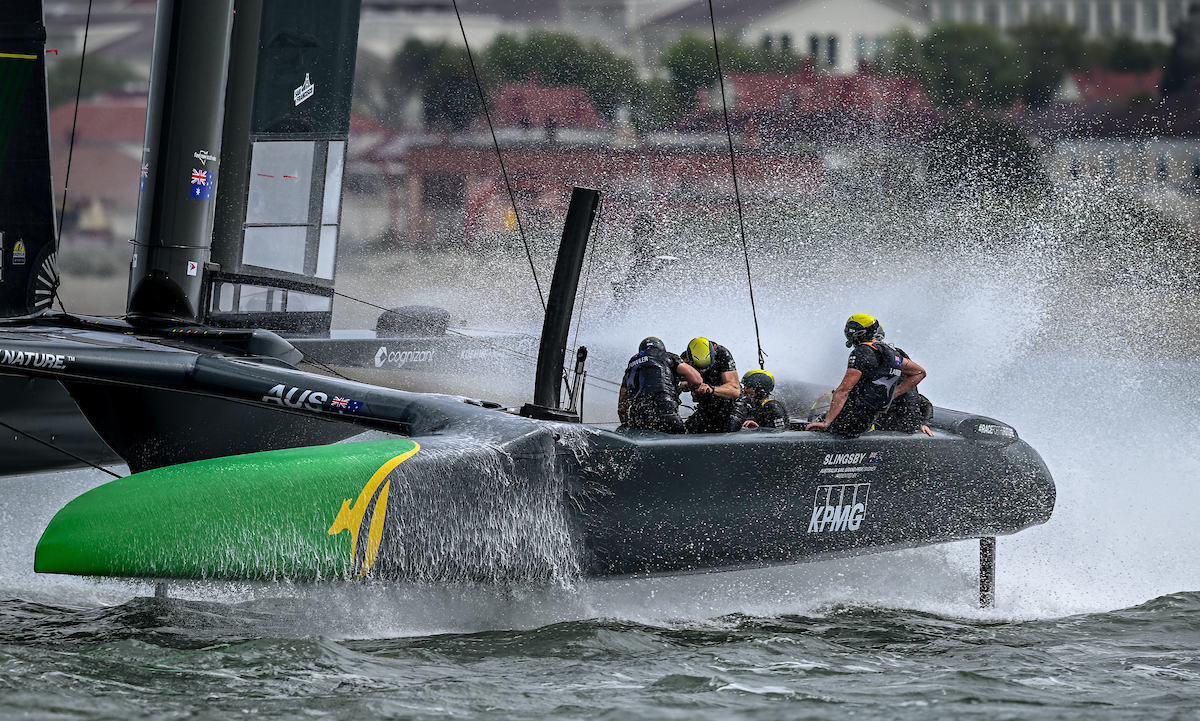 Yacht Racing Life editor Justin Chisholm reports exclusively from the SailGP Season 2 grand finale in San Francisco on a final day packed with drama, collisions and a one million US dollar winner.

“You couldn’t ask for a worse wind direction!” Those were the words of SailGP CEO Russell Coutts this morning as he surveyed San Francisco Bay from outside the media centre in the St. Francis YC an hour before the second and final day of the grand finale SailGP event of the international circuit’s second season. “

The cause of Coutts’ consternation was a nasty looking weather front closing in on San Francisco from the west which had dragged the prevailing wind round to the south from its normal virtually year-round westerly alignment.

This meant today’s breeze would be filtered through San Francisco’s hilly topography and parallel street system before it made its way out to the racecourse.

“I’m so peeved it has gone around to the south,” Coutts told me tersely as he punched up SailGP race director Iain Murray’s number on his phone before stomping off to get the latest update.

Out on the water the crews of the eight-strong fleet of F50 catamarans were trying to make the best of the flukey 10 – 12 knot conditions, darting between the race management boats as last minute tweaks were made to the course configuration.

Three races were on schedule for today – two to complete the five-race series to decide the winner of the San Francisco event, and one final winner-take-all, three way shoot-out between Tom Slingsby’s Australia, Jimmy Spithill’s American squad, and Nathan Outteridge’s Japanese crew.

Of the three one-million-dollar finalists Outteridge looked the most assured during yesterday’s three races. He dominated the start box and rounded the first turning mark in the lead in all three races. The Japanese only managed to convert that advantage into a race win once, but Outteridge and his crew still got a confidence boost as they sailed home yesterday evening as boat of the day.

Tied on points was Tom Slingsby and his Australian crew who had recovered well from a bad capsize in training in Thursday and turned in a 2, 4, 3, points score to sit tied on points at the top of the San Francisco leaderboard.

Meanwhile, Jimmy Spithill’s American crew turned in what appeared to be a lacklustre 5, 7, 5 score line having declared before racing that they were prioritising the grand final over the San Francisco series and that hence their goal was to ‘protect the asset’ rather than risk damage.

The first attempt at staging the opening race of the day came to nothing after one of the leeward gate markers broke loose, causing chaos as the entire fleet arrived at the other mark virtually simultaneously. For safety reasons the race committee pulled the plug and the race was restarted.

As the wind began ratcheting up there was drama at the first leeward gate as Jordi Xammar at the helm of the Spanish boat pushed his luck too far trying to sneak inside the Americans. The resulting collision saw the Spanish team mount the back section of the US boat’s port hull tearing a large hole in the sealed aft scoop section.

As Spithill’s chase boat surged in alongside to assess the damage and try to come up with a repair strategy, back on the racecourse Peter Burling’s New Zealand crew sailed a confident race to take the win ahead of Quentin Delapierre’s French crew in second and Ben Ainslie’s Great Britain in third.

With the Spanish out trying to repair a hole in the bow of their boat and the Danish still trying to remedy the technical issue that had put them out of the first race of the day, and the Americans opting to sit it out for repairs, the second race of the day got underway with just five boats on the start line.

The Australian team took the win, with the British in second to cement their respective first (and 300,000 US Dollar prize) and second places in the San Francisco event.

But there was more drama on the first downwind section of the course when the Kiwis and French boats came spectacularly together at high speed.

The blame appeared to lie with the French on port who had turned up to cross the stern of the starboard gybe British boat, but failed to keep clear of the fast approaching Kiwis, also on starboard, who had to throw the boats into a crash gybe to avoid a catastrophic and deadly collision.

On the American boat things were looking up after sterling work by their shore crew enabling Spithill to confirm the crew would 100 per cent be ready to race in the million dollar final race.

If the tension needed ratcheting up any further at this stage, three action packed legs into the grand final and with all three boats dogfighting for the lead, a whale was spotted on the course, automatically triggering racing to be suspended.

With the whale now chaperoned off the racecourse by the American Coastguard the teams now faced a dramatically reduced wind velocity for the the restart of the grand final.

In what followed all three boats were off the foils in the final minute, but it was Slingsby’s crew who coaxed their boat back into the air  before their finals to streak into a gigantic lead at the first leeward gate. USA rounded second with Japan 10 seconds or so behind in third place.

At this stage the race was Slingsby’s race to lose – particularly as the course configuration had made the race into a processional with no manoeuvres either upwind or down.

But as the Australians tacked around the first windward gate they fell off the foils allowing the US and Japanese to close to within 100 metres before they too splashed down.

The Australians held their nerve and were the first to establish enough speed to get airborne and scorch off to an 800 metre lead at the second leeward gate. Despite the best efforts of Outteridge at the wheel of the Japanese F50 to close them down, the Aussies stayed cool and composed to take the winning gun of the one million dollar final race.

Japan came through to take second with the disappointed Americans finally finishing a distant third.