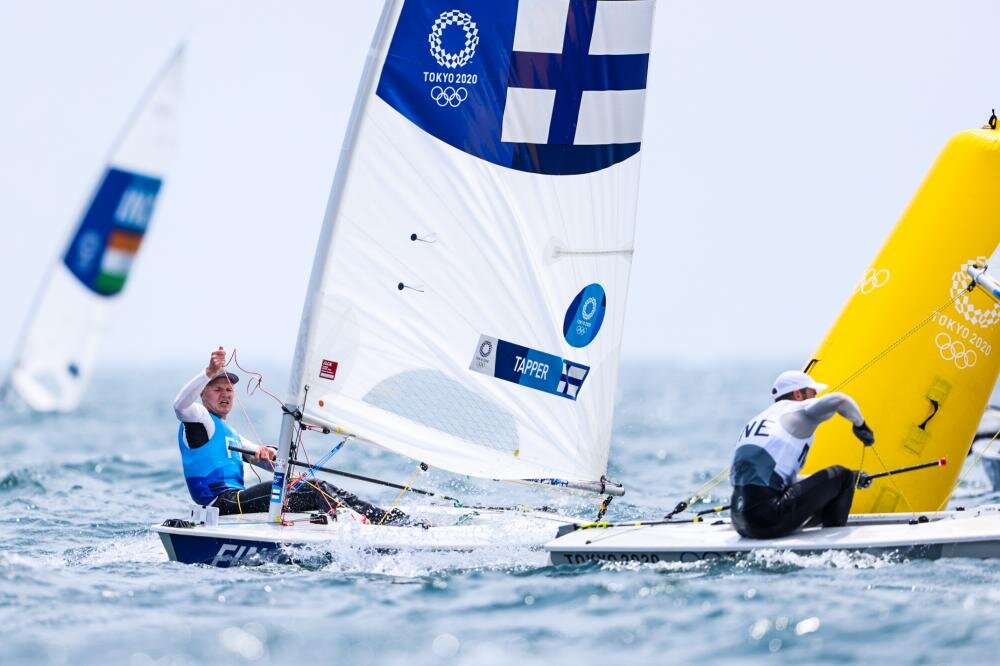 Andy Rice’s analysis of the second day of racing at the Tokyo 2020 Olympic regatta taking place on the waters off Enoshima, Japan.

There was more wind than expected for the second day of racing at the Olympic Sailing Competition which was just as well as the lumpy, confused wave pattern made it hard to get into the groove.

When the Pacific swell hits the shoreline of Enoshima and the concrete harbour walls, it reverberates back out to sea, turning the field of play into something akin to a washing machine. Finding a rhythm through the water is difficult, made all the harder by the breeze shifting first one way, then the other, without much discernible pattern. Many suffered, but a few managed to make sense of nature’s chaos.

The Laser, Laser Radial and the Men’s and Women’s RS:X all took to the water in a 10-15 knot easterly breeze and successfully completed their scheduled races.

Kiran Badloe (NED) came ashore as the new leader of the regatta. However, there was a protest against the Dutch sailor from closest rival Mattia Camboni from Italy. It was a port starboard incident at the windward mark where Badloe had failed to keep clear from Camboni.

The protest resulted in Badloe’s disqualification from race five in which he had finished second. This relegates the three-time World Champion to third overall, a point behind yesterday’s leader Mateo Sanz Lanz from Switzerland, now in second overall. Camboni holds a four point lead going into the windsurfer fleet’s day off from competition.

Speaking as he came off the water before going into the protest, Camboni was his usual, smiling, upbeat self. “The racing is intense. You must be focussed all the time. You cannot stop watching what is happening around you. This is the Olympic Games. Everyone is at the top level, so it’s always a good fight.”

Badloe likes to keep his emotions at the same pitch, regardless of what comes his way, and the same with the wind conditions. He claims not to have a favourite type of breeze. “I like all-round conditions so I’m pretty happy to get what comes our way,” said the Dutchman, who isn’t that bothered about what the weather forecast says for the rest of the week. “We have a day off now, and we’re going to come here the day after tomorrow and no matter what condition, we’ll turn up at the same time and we’re going to go racing.”

France’s Thomas Goyard started the day with a 13th but hit the reset button to win the next two races. This lifts the Frenchman to fourth overall.

Emma Wilson (GBR) moves to level on points with regatta leader Charline Picon (FRA). The Briton put together scores of 1,4,2 in conditions that others were finding very hard to make work on the RS:X board. “It was pretty shifty with the wind coming from the land, so that was always going to be tricky. I got good starts and just tried to do what I could do best, to trust myself.”

It was a pretty good day for Picon, the defending Olympic Champion, who started shakily with a ninth but then recovered with a race win and a fourth. “The wind was more intense than we expected, 12 to 18 knots offshore, unstable, gusty. It was complicated racing today,” she said. “But we are at the halfway of the competition, in a fight with Great Britain and China. So it’s OK.”

China’s Yunxiu Lu had the best day on the water with an incredible set of scores – 2,2,1 – moving her to just two points off the lead and nine points ahead of Italy’s Marta Maggetti in fourth overall.

Pre-regatta favourite, the three-time World Champion Lilian de Geus couldn’t disguise her dejection as she stepped ashore from a day that didn’t seem that bad – 8,3,11 were her scores. The Dutch sailor had gold very much on her mind for Tokyo 2020, and at the halfway stage – lying in sixth place – she knows a lot of things need to go her way if that’s to happen.

“Today I just missed the wind shifts, I guess. I was a little bit too early or too late all the time. We still have more than half a week and yeah, I just need to see what the next day brings and I hope I can refocus.”

Finland’s Kaarle Tapper was not on many people’s radar as a likely candidate to be topping the leaderboard in the mightily tough Laser fleet. But after three races that’s where the flying Finn finds himself. Following on from a second place on the opening day, Tapper took third in the first race of today, followed by a 14th which in this fleet is not all that bad either.

Four points behind the Finn are two great friends and training partners, as well being Olympic silver medallists from the past two Games, Tonci Stipanovic (CRO) and Pavlos Kontides (CYP). While the Croatian is nominally in second overall on tiebreak with worst race discarded, he’d rather have the more consistent set of numbers held by the Cypriot. Counting all scores, Kontides has the lowest points in the fleet and is the only sailor to have kept his results inside the top ten.

His results of 4,7,5 don’t tell the real story of why the Cypriot is doing so well this week. In yesterday’s race Kontides hauled himself back from 27th to fourth, and today was a similar story of coming back from the dead. “Very changeable conditions – big windshifts and changes in current as well – which gave a lot of opportunities for gains, but also losses. I was finding myself deep after the first lap in both races today, but fortunately I was able to finish well.”

In full hiking conditions and big waves to navigate, it was a full-body workout for the Laser sailors on the Enoshima course. Sweden’s Jesper Stalheim was leading the race for a while before yielding to 2020 World Champion Philipp Buhl from Germany. Stalheim dropped to third and found himself pinned by another boat as he was approaching the windward mark.

The Swede misjudged the current pushing the fleet on to the mark, and after hitting the mark it went from bad to worse as he capsized in the course of taking his penalty turn. Meanwhile Milivoj Dukic overtook Buhl and made it a memorable first race victory for Montenegro at the Olympic Games.

Although Buhl would love to have won the race, he was philosophical about finishing second. The German was quietly content with his performance so far at his second Games. “I’ve got five years’ more experience since Rio 2016. Winning the World Championships last year helps me to be a lot more relaxed now. I think it took a lot of pressure away from this event. Now I just go with it, rather than in Rio where I felt like I had to do it,” he emphasised.

Stalheim must have been kicking himself to have made a mess of his opportunities in the first race of the day. But he kicked himself so hard that he shot into the lead of race three. This time, no mistakes, and the Swede hammered home the win.

Line Flem Høst (NOR) is the surprise package of the Olympic Sailing Competition so far, the Norwegian sailing an unbelievably consistent regatta in such unpredictable conditions. “I was actually feeling kind of shaky, a bit nauseous, not quite ready,” admitted Høst. “So it was really great to have such a good day and really feel like I was in the zone.”

Vasileia Karachaliou (GRE) rose up the rankings too, on the back of 6,1 scores and sits two points off the lead. “It’s nice to win a race, but it’s just another regatta, even if it’s the Olympics. My most important goal is to try to keep all my scores in the top 10, and then see what happens at the end.”

Until the fourth race this afternoon, Anne-Marie Rindom had been the only athlete to keep all her results inside the top 10, but then the Dane proved that even she is fallible in the vagaries of Enoshima as she finished 13th late this afternoon.

However the bronze medallist from Rio is still in bronze medal position in Tokyo. “I’m a little bit disappointed about that last race. But all in all, I think I managed to keep to my goal, which is to be present in the moment, to look out of the boat and not be affected by my emotions, which is not that easy because there are a lot of emotions at an Olympic Games.”

Following a hard first day on the water, defending Olympic Champion Marit Bouwmeester (NED) really needed to up her game and she came away from the day with a 7,2, lifting her to fifth place overall, two points behind Italy’s Silvia Zennaro. Bouwmeester had been leading the fourth race before being passed by Karachaliou, but at least the Dutch two-time Olympic medallist is in striking distance, 16 points off the overall lead.

Two years ago when she won gold at the Hempel World Cup Enoshima, she celebrated with singing ‘Barbie Girl’ at a karaoke bar. Bouwmeester admitted the gold medal looks like a big challenge, but promised, “If I win, I will sing Alphaville.” Alphaville’s best known song from the 80s being ‘Big in Japan’.

The Men’s and Women’s RS:X Windsurfers will enjoy a day off on Tuesday 27 July and the Laser and Laser Radial fleets will continue their competition.