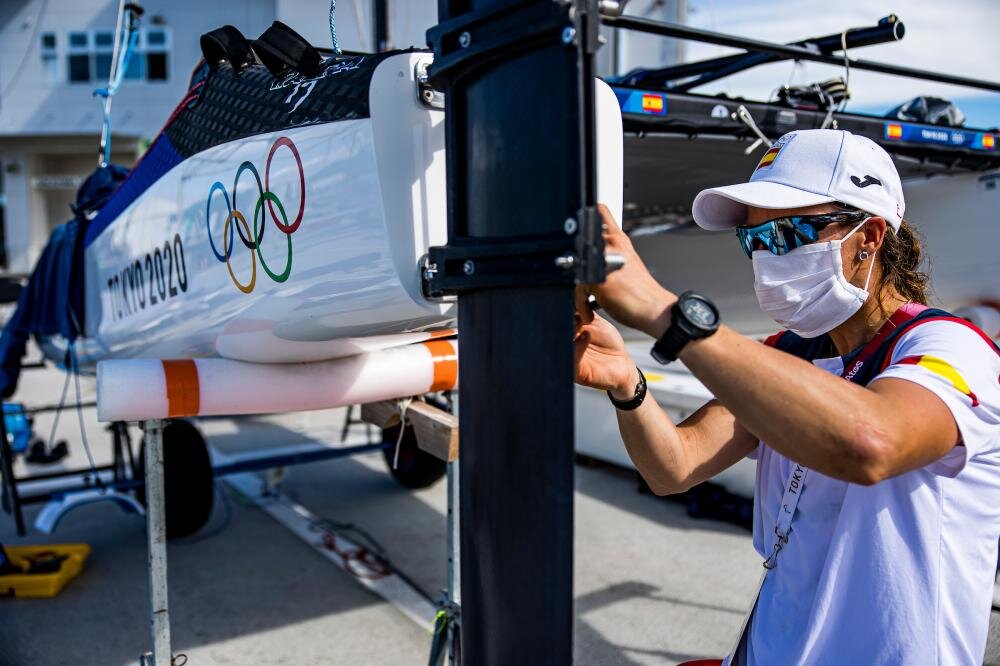 Andy Rice reports from the Tokyo 2020 Olympic regatta in Enoshima, Japan where a lack of wind on Sagami Bay meant no racing on Monday, Day 9 of the Sailing Olympic competition.

The absence of meaningful breeze means the skiff classes, the 49erFX Women and 49er Men, will have to wait another 24 hours to decide the medals in their events.

Director of Events at World Sailing, Alastair Fox, explained: “Races will not be started in less than an average of 5 knots of wind established over the entire course area. This lower limit may be higher if there is strong current in the racing area. The bottom line for today is that the wind was not stable across course areas.”

The forecast showed there would be clear shifts, and with a front arriving in the middle of the afternoon there was no certainty of when the wind would finally stabilise, but it was unlikely to happen before the start deadline of 1630.

With the stronger forecast for tomorrow, the Race Committee’s decision is that racing is postponed for the day and a new schedule for tomorrow will be published.

Tuesday 3 August will now be a big day for deciding the medals in four events:

Today was also meant to be the conclusion of the 470 Men and 470 Women’s Opening Series, but their final races will also take place on Tuesday.

Here’s a round-up of how things stand in the events.

Going into the 49erFX Medal Race two high-class teams share the top spot on equal points – the double World Champions Annemiek Bekkering and Annette Duetz (NED) who will wear the yellow bibs, and Martine Grael and Kahena Kunze (BRA) looking to defend their Olympic title from five years ago. Only three points off the lead are Tina Lutz and Susann Beucke (GER), who are promising to race aggressively for the gold, while just back from them are the reigning World Champions from Spain, Tamara Echegoyen and Paula Barcelo. Echegoyen rose to the occasion to London 2012, winning a spectacular final in the women’s match racing.

By their standards, the yellow bib was a long time coming for Pete Burling and Blair Tuke (NZL), the most feted sailors of their generation. But the yellow bibs are the colour that will mark out the defending Olympic Champions on the start line of the Medal Race. Unlike Rio 2016 where the Kiwis locked up the gold with a race to spare, they’re only four points ahead of two teams who are hungry for the podium – Dylan Fletcher and Stu Bithell (GBR) alongside Diego Botin and Iago Marra (ESP). Also sharing equal points but 10 points back from bronze are the German and Danish teams.

Giles Scott has a nine-point lead to take into the Medal Race ahead of Zsombor Berecz (HUN), who’s just two points in front of Joan Cardona (ESP). Josh Junior (NZL) had a slow start to the competition but won the final qualifying race, which puts him fourth, eight points out of the medals so still in with a shot of getting on the podium.

Ruggero Tita and Caterina Banti (ITA) sailed impeccably during the Opening Series, and the Italians’ reward is that they won’t leave Tokyo with less than a silver medal. The only team that can take the gold away from Italy are John Gimson and Anna Burnet (GBR), although they’re 12 points behind. The danger for the British in this scenario is whether the Italians will choose to match race their only threat, which could jeopardise the British team’s hold on silver.

The consoling thought for the British is that they have at least already secured a place on the podium. Ready to pounce on any duelling between the front two are Paul Kohlhoff and Alica Stuhlemmer (GER), although the Germans must keep an eye on the Australian cousins with Jason Waterhouse and Lisa Darmanin (AUS) in fourth place. The Olympic silver medallists from Rio are seven points behind Germany and will be doing everything in their power to get their hands on the only medal available to them, the bronze.

Mat Belcher and Will Ryan (AUS) would say that it’s far too early to be talking about gold medals. Even with two qualifying races and a Medal Race to go, though, a 19-point advantage over second place is a pretty handy lead over Jordi Xammar and Nico Rodriguez (ESP), who have got faster during this regatta. Spain are four points in front of Sweden and Great Britain who are tied for third.

Hannah Mills and Eilidh McIntyre (GBR) hold the overall lead of the 470 Women, although only a point in front of Agnieszka Skrzypulec and Jolanta Ogar (POL), who have worn the yellow bibs for the early days of the regatta. Nine points further back is France’s Camille Lecointre and Aloise Retornaz (FRA) in third. Best of the rest are the Swiss team of Linda Fahrni and Maja Siegenthaler (SUI), although they’re currently 17 points away from the podium with just two qualifying races to make up the gap.