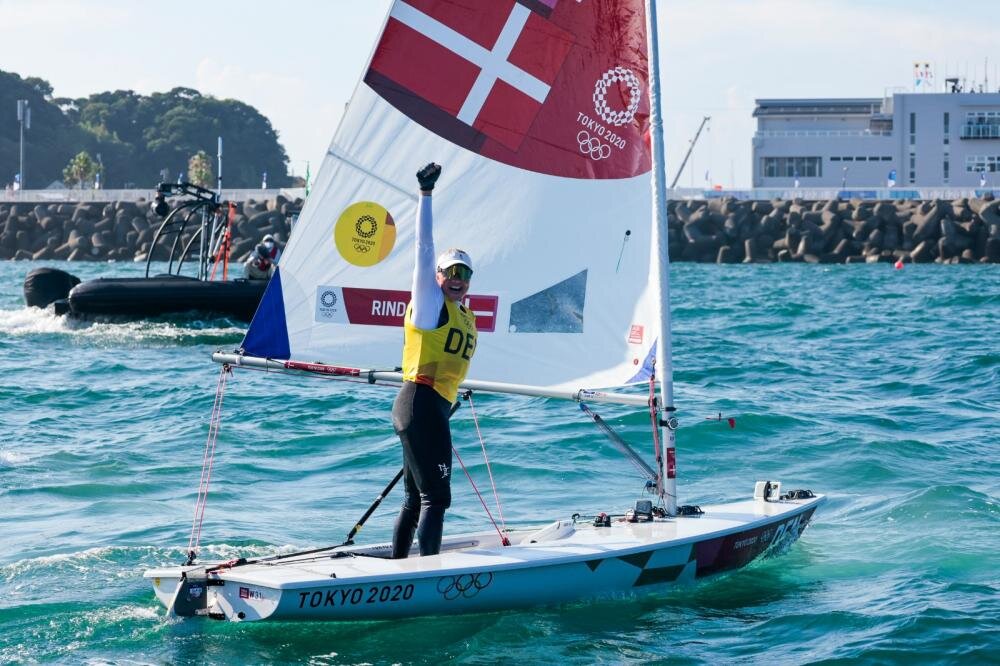 The latest update by Andy Rice from the Tokyo 2020 Olympic regatta in Enoshima, Japan where the medals in the Laser and Laser Radial classes have been decided.

Great weather returned to Enoshima for Sunday, with sunshine and moderate winds for the sailors to really stretch their legs and put some physicality back into their racing after the light-wind stress of the past two days.

Although Matt Wearn had already secured the gold medal, the Men’s One Person Dinghy – Laser Medal Race was packed with drama as the pendulum of fortune swung one way and then another. Multiple sailors had a shot at the silver and bronze and it wasn’t until the very end that the medals were decided.

The same was true but even more so in the Women’s One Person Dinghy – Laser Radial Medal Race, never certain until the fleet had crossed the finish line.

Meanwhile the Finn and Nacra 17 completed their Opening Series and some sailors know they’re going to get medals. But no one has wrapped up gold before their Medal Races on Tuesday so it’s all to play for in these two events.

The 470 Men and Women have now completed all but the final two races of their Opening Series and some clear patterns are starting to emerge.

Wearn had already wrapped up the gold medal before the Medal Race but was obliged to compete in order to complete the regatta.

It was a clean start off the line, and quite even too. Jean-Baptise Bernaz (FRA) took up the lead, making the most of a mathematical but unlikely chance of a medal.

Hermann Tomasgaard (NOR) rounded the first mark in eighth, not far back from the ten-boat fleet, but over the next lap the Norwegian sailed through to fifth, making his intentions clear for the silver medal.

However, Stipanovic fought back hard on the final lap, overtaking Tomasgaard and moving into silver medal position.

At the finish, Bernaz won the race, Wearn was second, but more importantly Stipanovic’s fourth place got him the silver medal to go with the one he secured at Rio 2016. Tomasgaard (NOR) was still happy to get the bronze.

Matt Wearn’s gold medal makes it three golds in a row for Australia in the Laser, following on from Tom Slingsby at London 2012 and Tom Burton at Rio 2016.

“It’s a special thing to be able to continue that Australian legacy in the Laser,” said Wearn. “After my first day when things hadn’t gone so well, I really had to dig deep, to work on my mental strength to get me back up there again. It’s amazing to have this moment and thank you to the people of Japan for making this happen.”

Following a glittering Olympic career that spans quarter of a century, today’s Medal Race was the last time we’ll see Robert Scheidt competing at the Olympic Games. His story began at Atlanta 1996 when the Brazilian won gold in the Laser. Now aged 48, with five Olympic medals from seven Games, Scheidt bows out as one of the greatest of all time.

At the start the individual recall flag went up. Two boats were over and Marit Bouwmeester (NED) was one of them. The Dutch sailor returned to start correctly, immediately putting her to the back of the 10-boat fleet and playing catch-up for the medals.

However, Silvia Zennaro (ITA) was also over at start time and didn’t return. She was later pulled out of the race further up the first leg.

At the top of the first upwind leg, Tuula Tenkanen (FIN) briefly moved into the medal zone but on the first downwind leg, Emma Plasschaert (BEL) surfed from fourth into the lead, moving her into silver position.

However, Bouwmeester’s recovery was even more impressive, moving in on the pack on the downwind and opting for the right-hand gate when most of the fleet had gone left. From being left for dead at the start, the comeback queen was back into silver medal position.

Next it was the turn of Josefin Olsson (SWE) to have her say, having climbed from seventh in the early stages to third at the end of the first lap and up to the lead by the final windward mark. Now the Swede was in medal contention, threatening the Netherlands for silver.

Olsson crossed the finish line a fraction in front of Plasschaert. Behind her Bouwmeester had dropped a critical place and slipped back to bronze, leaving Sweden to take silver by the slimmest of margins, just three points behind Rindom who somehow clung on to gold.

She said she would be back for the only medal that matters to her in three years’ time, at Paris 2024.

Asked how it felt to be Olympic champion, Rindom grinned, “Well, so far, it’s pretty great!”

It didn’t feel so great during the Medal Race though. “After the start, it was going kind of easy, but then it kind of crumbled beneath me. I just lost everything on downwind leg. And then my self-bailer didn’t work because there was so much seaweed stuck in it and we had never sailed in so much seaweed out there as I saw today.

“The boat was filling up with water. So many things went wrong but I just kept fighting. I told myself to just keep breathing, take a deep breath and keep working hard until the end.”

Ruggero Tita and Caterina Banti (ITA) sailed impeccably in today’s medium winds, putting down scores of 1,2,1 which has now guaranteed a minimum of silver for the Italians. Only the British in second can take gold from Italy.

John Gimson and Anna Burnet (GBR) sailed a steady day with 5,2,4 scores which put them 12 points back from Italy and 12 points ahead of Paul Kohlhoff and Alica Stuhlemmer (GER). Great Britain is guaranteed a medal, being far enough ahead on points compared with Jason Waterhouse and Lisa Darmanin (AUS) in fourth place.

The Aussies are seven points behind Germany and will be looking to challenge for a bronze in the Medal Race two days from now.

Tita was pleased with how he and Banti had executed the day. “We did the right things, everything felt easy, but you never expect anything in these boats. We have been training hard for five years and we are pleased to have reached this point.”

Giles Scott won the opening race of the afternoon followed by a seventh, keeping the British sailor top of the Finn leaderboard.

Zsombor Berecz (HUN) scored two fourths which were sufficient to move the Hungarian into second overall, just two points ahead of Joan Cardona (ESP) who slipped a place today.

Scott has a nine-point lead on Berecz who might be more concerned about defending the silver when it comes to the Medal Race on Tuesday. Josh Junior (NZL) won the final qualifying race which puts him fourth, eight points out of the medals so still in with a shot of getting on the podium.

Scott commented, “Another tough day out there and nice to be through the ten-race series. You know, these Olympics are so intense for us and for me personally. To be able to put together a series like I have done is a pretty special moment. But that being said, I’ve got a lot of work to do in two days’ time to come away with the colour of medal that I want.”

Professional athletes that they are, Mat Belcher and Will Ryan (AUS) would say that it’s far too early to be talking about gold medals. Even with two qualifying races and a medal race to go, though, a 19-point advantage over second place is a pretty handy lead.

Scores of 2,1 now put them well ahead of the chasing pack, now led by Jordi Xammar and Nico Rodriguez (ESP) who made a slow start to the regatta. Finishes of 3,2 now put Spain in second, four points in front of Sweden and Great Britain who are tied for third.

In the modern era of highly physical 470 racing, Belcher says that even when he and Ryan win a race, there isn’t enough energy left for any kind of celebration.

“Not so much a feeling of celebration, more of being relieved,” he commented. “It was a really physical race, in really high temperature, a lot of high cardio work to get the boat down the waves. When you cross the finishing line, you’re just completely overheated and just happy if you can get across the line with a good result.”

Results of 1,3 have moved Hannah Mills and Eilidh McIntyre (GBR) into the overall lead of the 470 Women, although only a point in front of Agnieszka Skrzypulec and Jolanta Ogar (POL) who have worn the yellow bibs since day one.

Best of the rest are the Swiss team of Linda Fahrni and Maja Siegenthaler (SUI), although they’re currently 17 points away from the podium with just two qualifying races to make up the gap.

McIntyre is enjoying the intensity of the battle with the Polish team, “It’s amazing racing. We had a fantastic day, but so did they, so we have to keep on battling away to fight for every point.”

Meanwhile the Finn and Nacra 17 sailors will enjoy a day of rest before their Medal Races on Tuesday.