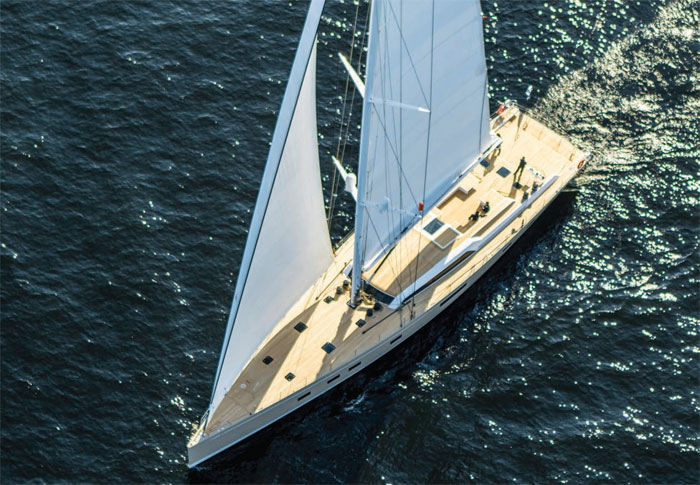 The creation of Maxi Swan as a standalone entity promises to both stimulate and shake up the top end of performance sailing all the way across the board – and in ways yet to be imagined.

A lot has happened at the Nautor shipyard in the last 12 months and some major milestones have been achieved. They’ve established Maxi Swan as a separate entity in its own right, announced two new models – the 88 and 108 – to expand the range, and sold the first units of each.

They’ve also built and launched the first of their new flagship model, the 120, started construction of their first diesel-electric hybrid, and launched the ClubSwan 125, which promptly claimed monohull line honours in the Fastnet Race on its first outing and set a new course record. Meanwhile, the construction of the first ClubSwan80 continues… and that’s just the highlights of the maxi division.

The strategy that’s been driving these projects was set some time ago and many of them have been steadily under way for three, four or even five years but it’s fitting that the leaders of the Italo-Finnish shipyard waited until 2021, when many longterm goals were coming to fruition, to announce the dawn of a new Maxi Swan era.

‘What I mean by new era is that we now have a business that is dedicated to this size of yacht, studying and fulfilling the needs of owners on a continuous basis,’ Nautor Group chief executive Giovanni Pomati explains. ‘The outcome is that we have a wider range with four boats between 88 and 120ft. So we can match different hull sizes, different crew sizes, different degrees of self-sufficiency, and respond to changing regulations.’

Pomati himself is part of this new era, having joined Nautor in 2018 from a board-level role at Pirelli. ‘It’s also a new era because the design of the boats has evolved,’ he says. ‘We have focused on hull shapes, on decks and coachroofs. I knew we could do something more with industrial design to make better use of the deck.’

The new generation of Maxi Swans might look similar to the last one at first glance – this is evolution, not revolution and Nautor has been careful to keep all changes within the scope of Swan’s well-defined DNA – but a huge amount of work has gone into refining and updating the brand not just in terms of sailing qualities but also aesthetics, general arrangements and the yachts’ intended use.

Their performance numbers might be broadly similar to the previous generation but modern Maxi Swans are designed to sail upwind at a shallower angle of heel and a lot of CFD modelling has been done to optimise motion comfort. Swans have never been prone to slamming in rough seas but a major focus for the new designs is to ensure a remarkably smooth and comfortable ride, even by the marque’s own high standards.

Noise reduction – always important for cruising yachts with carbon hulls and rigs – has been another key focus. Pomati says several of Nautor’s repeat customers have expressed astonishment at just how quiet the sailing, hotel and mechanical systems of their new Maxi Swans have proven to be.

In a departure from Nautor’s previous strategy, all four of the current Maxi Swan models have essentially been designed to the same brief. They’re all cruisers first and foremost. The success of the ClubSwan racing division has allowed Maxi Swan to put less emphasis on the racing function of its yachts. They’ll still be competitive in regattas and a full suite of performance-enhancing features can be specified (witness the full carbon construction, square-top main and Southern Spars rig of the first Swan 98, for example), but the deck plan is no longer constrained by the requirements of a full racing crew. The result is that they’re more comfortable and versatile, focused on pure enjoyment under sail and especially at anchor, where each deck plan has three separate, well-defined zones with different functions.

Another big change is not easy to see – because they’re got it right. The streamlined coachroof profiles and sweet lines of the current Maxi Swans belie the increased volume inside their hulls. That’s largely down to the involvement of Lucio Micheletti, a Milanese artist and car designer of Zagato, BMW, Aston Martin, Mitsubishi and Audi Style Centre just to name a few, who has turned his attention to boats. A chance meeting with Pomati (who knows him from the automotive industry) led to Micheletti’s appointment as Swan’s exterior designer.

It’s a challenging brief that requires him to preserve the brand’s Scandinavian design DNA while giving it an Italian accent, working closely with Swan’s longstanding naval architect Germán Frers. ‘Germán has the final word,’ Pomati says, but by all accounts the veteran naval architect embraced this new partnership with alacrity.

‘It’s quite common in the powerboat world to use different designers for the hull and superstructure,’ Pomati says. And indeed there is a broad and deliberate convergence under way between the designs and layouts of motor yachts and sailing yachts in the superyacht sector, with the former becoming more seaworthy and efficient, the latter more spacious and luxurious. This is obvious when you step inside one of the new Maxi Swans, which have far more light and space inside than one expects in a sailing yacht.

Another key figure in Nautor’s new era is Misa Poggi, probably best known for designing Loro Piana boutiques around the world. Like Micheletti she was briefed to respect and preserve Swan’s Nordic design values, Pomati explains, while creating a warmer interior design scheme that appeals to a new generation of buyers from all over the world. ‘She studied the last 20 years of Swan interiors to develop the new interiors,’ he says. The first model with a Poggi-designed interior was the Swan 48 and then came the 98, launched last year.

Also significant is that Nautor no longer offers a choice of three different coachroof options for Maxi Swans. These are still very much semi-custom builds, but instead of the old flush deck (FD), semi-raised (S) or raised saloon (RS) model variants, the shipyard has focused on perfecting one cabin top and deck plan for each model, with increased emphasis on structural engineering to allow far more flexibility for altering the yachts’ general arrangements. It’s a smart move in a market where many buyers now appoint their own interior designer to work alongside the shipyard.

‘The 120 is the first Swan with a completely custom GA and interior,’ Pomati says. ‘And it’s the first one with two flights of steps and a beach club in the stern. Not just a platform for boarding and a tender garage, it’s also a place to have dinner.’ The first 120, launched in August, is a full carbon build using external and internal skins of Gurit Sprint epoxy prepreg carbon fibre and M-grade Corecell foam.

The new Swan 88 is another important milestone model. Designed and sized to avoid most of the complications of IMO Tier III compliance, it’s optimised for low operating costs with one eye on the charter market and it’s the first Swan with the option of diesel-electric hybrid propulsion, which includes hydrogeneration under sail.

The 88’s hull is notably beamy with significantly more form stability than a last-generation Swan and carries its full beam almost all the way aft. The rudders have moved forward to enlarge the beach club area and the mast has moved aft to enlarge the foretriangle, giving a more balanced sail plan. A lot more emphasis than usual was placed on CFD analysis for this model, Pomati confirms, ‘and we studied the possibility of a fully glazed coachroof but we decided to remain more traditional.’ The first Swan 88 is due for delivery in 2024.

The most recent model to be announced is the Swan 108, which completes the range and points to the future. The first of these has already been sold. A key focus of development was the GA in general and the crew’s quarters in particular. ‘The crew’s mess has become an important issue for boats that are used for charter,’ Pomati says.

‘If you have a heavy charter season then you need a good crew area on board.’ The role of the galley has also changed: ‘In the past it was kept completely away from the saloon and guests. Now it is a hybrid area which the family can access, for example to have breakfast.’

Other changes in the 108 include the separation of TV lounge and dining areas, the addition of a day heads for guests, double island berths in all guest cabins, and a further refinement of the impressive automatic bimini and sprayhood, first seen on the Swan 115 Solleone, which pop out of almost invisible bays in the coachroof to shade and shelter the passenger cockpit. ‘We are also seeing more and more demand from customers who want to be able to work from their boats,’ Pomati says. ‘They want to use their boat more often and to spend more time on board.’