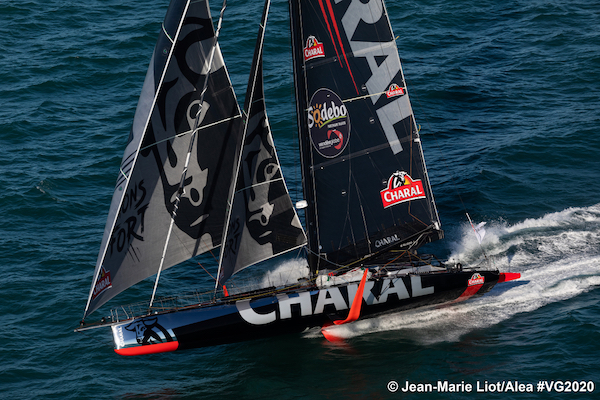 It may only have been five days since the 33 Vendee Globe skippers set off from Les sables D’Olonne on their solo around-around-the-world adventure but there has been plenty of going on out on the wilds of the north-Atlantic for podcast host Justin Chisholm to quiz his expert co-host Conrad Colman about on their second Vendee Globe special episode.

The biggest news of the week of course is that one of the hottest tipped race favourites Jérémie Beyou on Charal has been forced to return to Les Sables D’Olonne after suffering damage which the French skipper felt he could not effectively repair on his own.

It’s a crushing blow for a skipper who had only one goal – to win the race – and had spent the last four years in painstaking preparation to be as competitive as he possibly could.

What is going through Beyou’s mind now as he sails the lonely 600 nautical miles back to France? Is he focused solely on making as fast a turn-around as he can to get back in the race? Or might his spirit have been broken by the stark reality that lifting the Vendee Globe trophy may now be beyond his grasp?

Conrad – who knows Beyou and his team well – lays out the options available and shares his personal view on which decision Beyou might make.

Also on the show:

All that and lots more besides.