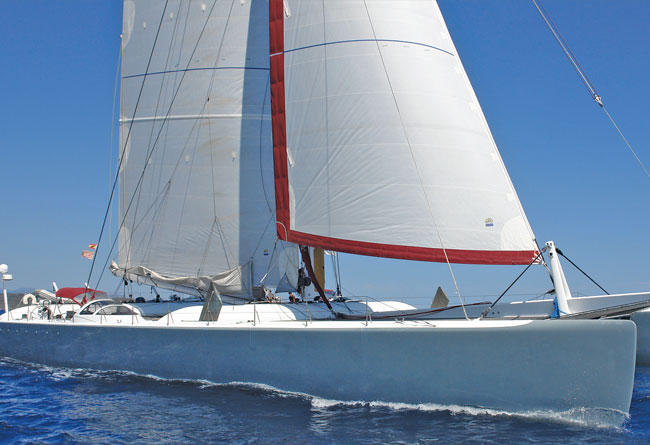 Grant Dalton’s round the world race winner Club Med has been relaunched as the ultimate global ‘fast cruiser’ Ocean Pearl. You might not wish to push it all the way to 40 knots… but you can!

The legendary maxi-catamaran, the première raceboat of her generation, has had its claws trimmed to reveal a fascinating fast cruising proposition, marketed through Bernard Gallay Yachtbrokers.

Ocean Pearl, as the boat is now known, was launched in 1999 as Club Med. An ultra-high-performance maxi-catamaran,it was among the largest and fastest multihull racing yachts in the world.

This 110-foot (33.5-metre) flying machine was designed by Gilles Ollier and custom-built by the renowned Multiplast yard in Vannes, France for legendary New Zealand yachtsman Grant Dalton to take on The Race, a gruelling non-stop, round-the-world challenge for giant multihulls.

Built entirely from carbon Nomex sandwich for lightness and strength, the design and construction took advantage of the latest high-tech materials and build techniques.

Its huge scale – including a vast, towering sail plan flown from a rotating 39.5-metre mast and boom and a carbon bowsprit – ensured that from the very earliest sea trials the boat’s performance was nothing short of breathtaking.

The boat’s huge scale and oceangoing pace made it the talk the sailing world in the run up to The Race and when the fleet left Barcelona, Spain on the first day of the new Millenium, Dalton’s men quickly established an unassailable lead.

Club Med stormed around the planet in record time, completing the 27,000-mile course past the world’s three great southern capes in just over 62 days – nine days inside the previous benchmark time. Along the way Dalton’s crew raised the 24-hour distance bar to 655.2 miles, averaging a remarkable 27 knots.

Dalton attributed the victory largely to the capabilities of his groundbreaking boat, which enabled the team to negotiate large-scale weather systems like the South Atlantic St Helena High with relative ease.‘This boat was the first of its kind, able to cover more than 600 miles day after day,’ he said. ‘It was a marvel and I was privileged to be on board.’

A year later, re-christened Maiden II for British skipper Tracy Edwards, the maxi-cat was back in record-breaking form once again, regaining its 24-hour distance record with a run of 697 miles in the North Atlantic off Newport, Rhode Island at an average speed of 29 knots. Edwards’ crew of 10 pushed the boat to a new top speed – a remarkable 44-knot peak– on the way to their new record.

‘The fact that we hit over 40 knots testifies to how hard we were pushing, the conditions and the boat’s performance capabilities,’ said helmsman Paul Larsen at the time.

After undergoing a comprehensive refit in 2015, this extraordinary boat has been reborn as Ocean Pearl and has a new life as a fast, comfortable and safe blue water cruiser.

On deck, the powerful Lewmar winch package has been upgraded to hydraulic power. Along with other modifications to the deck layout, this means the boat can be easily sailed by as few as three people.

Down below, the original stark racing interior has been upgraded with light, comfortable, high-quality accommodation more conducive to luxury blue-water cruising.

To minimise any ill effects to the boat’s performance, a close eye was kept on the weight added during the installation of the new inside layout, with only a two-ton increase overall.

The professionally equipped navigation station in the starboard hull features all-B&G instrumentation and a navigation computer.

Notably, despite her imposing size, with a draught of less than a metre this boat has the potential to access anchorages that conventional deepkeel blue water cruisers simply can’t.

Lightly used since the completion of the refit, Ocean Pearl is available immediately for an adventurous owner looking to combine the excitement and exhilaration of a pedigree high-performance racer with the comfort and status of a well-appointed maxi-cruiser.

Those yearning to see the world by sea can do so on their own terms and without taking an age to do it.

After a very similar refit to Ocean Pearl’s almost identical sister ship, Swift – the former Orange and Kingfisher 2 – the owner set off on a whistle-stop lap of the planet taking in some of the world’s most beautiful and remote locations and completing the circuit in just 10 months.