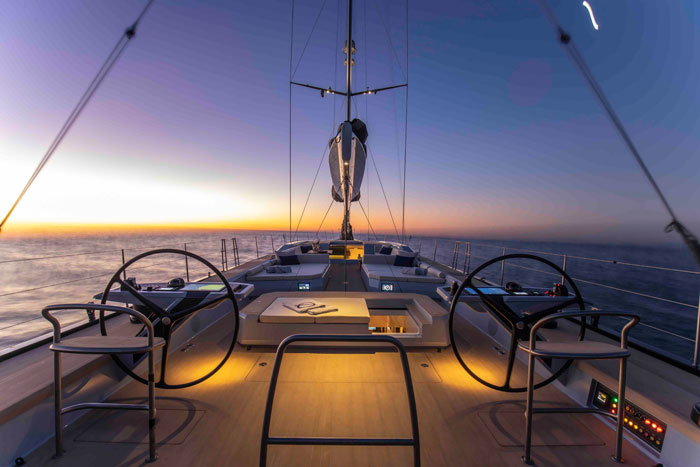 The Farr-designed SW105 platform lends itself well to customisation. Sørvind is a full carbon build with an extra-large Hall Spars rig, and a new cockpit design. Subtle changes were made to the coachroof that give her a subtly unique silhouette

The fifth Southern Wind 105 was launched in March and like each of the four 105s that came before, Sørvind is subtly but significantly unique. Made to measure for a keen lifelong sailor, this SW105 is a pure performance cruiser: fast and comfortable in equal measure but above all simply a joy to sail.

‘We are delighted that Sørvind’s owner selected Southern Wind to build the superyacht of his dreams,’ says Jeremy Peek, deputy commercial manager at Southern Wind. ‘When we first met in early summer 2020, there was an instant connection and positive collaboration.

The owner had clear ideas about what he wanted and what he did not like and fortunately, the Southern Wind 105 smart custom platform served as the perfect starting point. We were able to adapt certain aspects to match his design brief and now, only 21 months later, the yacht has already been delivered.’ Launched in March, with sea trials completed in April, Sørvind is now on her maiden voyage from Cape Town to Mallorca where a busy charter season awaits.

Concept
With a clear design brief built on the owner’s three core pillars of “distinct, refined and essential”, the project got under way with a design loop in which Southern Wind, Nauta Design and Farr Yacht Design worked with the owner and his captain Timothy Anderson to customise and style the boat.

“Sørvind’s design brief calls for a high-performance blue water cruiser that will be fast and fun to sail but she is the first SW105 that has been optimised for success on the charter market,” Peek explains. “Special attention has been dedicated to hospitality and specifically, towards the enjoyment and overall experience of everyone that sails on board.’ This is the first SW105 delivered to RINA charter class, but to achieve that classification only minor modifications were required.”

“The key to our success was the communication between the shipyard, the owner and myself,” Anderson says. “He wanted a sailing boat where he was still in touch with the ocean and the wind, which with bigger boats can sometimes get lost. I think we really hit a very nice size and style of boat. Everything is very uncluttered and smooth and clean. We’ve carried a Norwegian aesthetic throughout the styling of the boat.”

Interior design and layout
The ‘Nordic cool’ style of Sørvind’s interior draws some of its inspiration from the SW96 Seatius, which won a major marine industry design and innovation award in 2019 with a similar interior created by the same team – Nauta Design working with Jeroen Machielsen of Studio Hermanides, who was the owner’s design representative for Sørvind’s build.

‘The Nordic winter features strong contrasts,’ Peek explains. ‘The long nights mean everything that is up is dark while everything down is covered with snow and very light. This is one of the main trends with Sørvind, a blend of dark and light tones with textured materials to add further highlights.’

The lines of the interior are crisp and clean, with open sightlines extending all the way from the foot of the companionway through the main saloon, which has separate lounge and dining areas, and down into the lower mezzanine bar area on the starboard side of the keel trunk. Pale-coloured fabrics, sole boards and headlining are offset by dark hardwood veneers, while stepped surfaces and reveals add depth and interest.

The general arrangement puts the master suite in the bow, as far as possible from the noise of the yacht’s sailing and hotel systems, with large lateral windows on both sides. The master cabin has a forward-facing king size island bed offset slightly to port of the centreline, an L-shaped sofa to starboard and the en suite heads in the forepeak with his-and-hers sinks and a separate shower compartment.

There’s another large double guest cabin aft of the master suite and to port, opposite the bar area and two twin-berth cabins amidships, aft of the main saloon, which should make comfortable seaberths if the owner or guests are on board during offshore passages.

The crew area is aft, ideally located for long-distance deliveries between cruising grounds. A dedicated crew companionway leads down from the working cockpit with the forward-facing nav station at its foot, conveniently close to the helm positions on deck.

There are twin-berth bunk rooms to port and starboard, and a captain’s cabin with a double bed a little way forward on the starboard side, all with en suite heads and shower. The large galley to port also serves as the crew’s mess with a five-seat dinette on the centreline.

One of the main objectives was to create a yacht with outstanding performance in light airs – one that will typically switch its engine off and start sailing in just a few knots of breeze. Thus a larger-thanstandard rig was selected with an extra metre added to the height of the mast. ‘The VPP shows Sørvind sailing at 7.47 knots at target upwind angle in six knots TWS which is half a knot faster than the VPP for standard mast height,’ Peek says.

To boost the yacht’s internal volume up to 78GT and maximise the amount of natural light in the main interior living spaces, the Raised Saloon (RS) option was chosen – one of three deck plans designed by Nauta – as used on two previous SW105s, Wolfhound and Kiboko Tres. The coachroof was slightly modified, however, to give Sørvind a subtly unique silhouette.

Customisation
Chamfered deck and coachroof shapes are a feature of the earlier SW105s. ‘As we developed the fifth yacht in the series it was important to create something new and unique,’ Peek says. ‘The chamfers were softened into radius curves by modifying the tooling.’

Every one of the five SW105s has a different keel and ballast arrangement. Sørvind has a telescopic keel made by APM, which retracts from 5.6m to 3.65m, and twin rudders. ‘The steering system is mechanical and is similar to the tiller and track system seen on Imoca 60s,’ Peek says. ‘This allows better usage of the lazarette while still giving natural feeling and feedback to the helmsman.

The tender garage in Sørvind’s stern is enlarged to carry a Williams 435 SportJet RIB. ‘The garage and lazarettes are also optimised to store a plethora of toys including diving equipment, stand up paddle boards and two road bikes,’ Peek says. ‘The tender is launched with a sliding overhead bridge crane mounted on the deckhead of the garage. This custom system designed by SWS and built in carbon allows the crew to manoeuvre the tender safely and smoothly without any rollers and rails on the transom door.’

Construction
Despite being a cruiser Sørvind is a full carbon build, 400kg lighter than the standard option of a glass/aramid hybrid outer skin, and weight control was a priority throughout. The hull, deck and bulkheads are carbon/epoxy Corecell sandwich and the interior is honeycomb and foam sandwich, finished with premium veneers. Further weight savings include about 125kg with titanium deck fittings and 800kg by using Flexiteek.

‘Weight calculation and trim are important on every Southern Wind yacht and the weight of every installation, together with its location on the horizontal centre of gravity is compiled into a detailed weight calculation,’ Peek explains. ‘Sørvind is the fifth yacht in a mini-series and a further development of nearly 30 Southern Wind yachts in this size range. This prior knowledge and experience has allowed us to be very accurate with the weight calculation and provide very precise figures about the weight and position on board.’ The resulting displacement of 65.9 tons, combined with the extra sail area, should ensure exceptional performance in light airs.

On deck
The sailplan is 9/10 fractional on a high-modulus carbon mast with a split backstay and swept-back spreaders, a moderately sized foretriangle, a large pinhead mainsail, a furling code sail on the stemhead and a gennaker flown from the end of the bowsprit. Seven skylight hatches are set into the flush foredeck and four winches are clustered around the mast. The headsails are sheeted to longitudinal tracks set well inboard.

The large, multi-purpose foredeck locker is a unique feature. ‘It is capable of storing a furled staysail, code zero or gennaker that can be quickly and easily hoisted and deployed,’ Peek says. ‘It has a variety of uses and does not intrude on the interior spaces.’

The passenger cockpit is a classic Nauta configuration with broad, raised and sculpted coamings fitted with more skylight hatches on each side. The pair of huge sunpads come into their own when the yacht is anchored. Aft of the sunpads, the crew companionway also serves to keep the passenger seating safely separate from the working cockpit, which has two hydraulic primary winches in front of the twin wheels and two aft.

Performance
How fast does she go? ‘Sørvind clocked 17kts boatspeed on her very first sailing sea trial,’ Peek says, ‘which shows that Southern Wind is confident to push these yachts on sea trials, even on the first one.’ With numbers like that, she really will be a joy to sail.